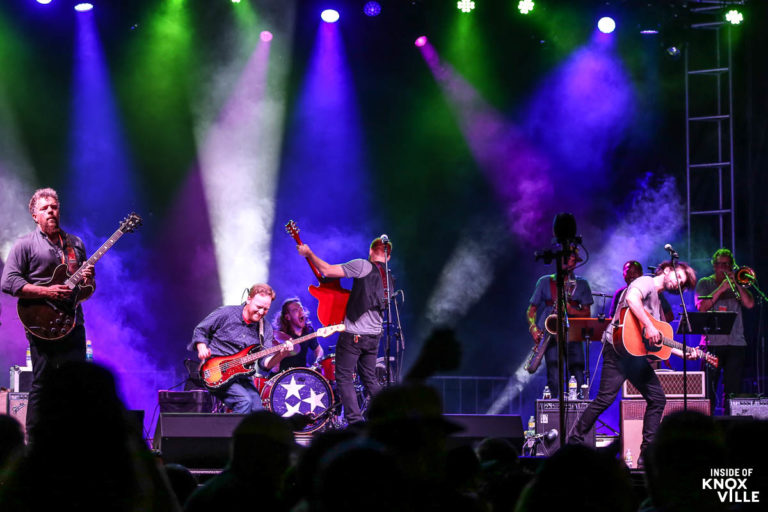 After two years of delays and dealing with the loss of headliner Blues Traveler (Leader John Popper down with COVID), the Dogwood Arts sponsored festival, with music curated by the Dirty Guv’nahs finally launched last Saturday. It was a great day for music, for the city, and for friends to gather after a long two years.

For me, it not only was a delight for the above reasons, but also because I got to share it with Urban Daughter and Urban Girl. Urban Daughter and I have attended dozens and dozens of concerts together over the years, but recent years have seen our pace fall off as a growing family and a range of real-life events have slowed her participation down.

The big bonus for us was that not only did we get back to great music together, but we were joined by Urban Girl, now almost thirteen, for her first festival. It may be a bit more about the food, fashion, and scene-making for her, but it was a joy to have her along for the ride. She offered, and I happily accepted, to cover the festival from her perspective. She thinks she might want to eventually be a writer and this is her first publication. So, here’s Urban Girl (AKA Kaitlyn Humphrey) with her take on the day:

The Southern Skies Music Festival this weekend at the World’s Fair Park was the first festival experience I’ve ever had. Even if I had been to one before, it still would have been an awesome time. The event was curated by The Dirty Guv’nahs who performed some of their songs along with covers from various artists. As mentioned on stage, this is their third year trying to put this all together because of being held back by COVID-19. Between the food, goodies, and great music, there is a lot to unpack from this year’s Southern Skies.

Urban Guy, Urban Daughter, and I all got VIP tickets to the festival. That allowed us to get air-conditioned bathrooms, a free bag, free poster, and two drinks of our choice from the bar. I, of course, just got water.

We were all pleasantly surprised at how large the VIP area was. It had a grass area where we could sit as well as an empty place where we could just stand and watch performers. Once we got settled into the VIP area, Willa Mae started off the event with several of her songs, starting at around 1:30 and going to 2:00. After she finished her performance, we all walked around a bit and looked at all the food truck options and merchandise.

I ended up getting some pop art from Kara Lockmiller, which I plan to hang on the wall in my room. We then made our way to the Dogwood Stage at 2:30 where the energetic TN Power and Light played for the crowd. While they were on stage, I got some of the best gelato I have ever had from the Gelato Brothers food truck.

We headed back to the Mockingbird Stage at 3:30 to see Electric Darling perform. The lead singer Sarah Monroe had very strong vocals and it sounded great with the rest of the band. Sometime after they were done playing, we went to get lunch. There were quite a few food trucks to choose from, which offered things such as tacos and burgers. We decided to go to Captain Muchachos where I got a chicken bacon ranch burrito bowl and a pink lemonade.

After finishing our late lunch, we listened to Daniel Donato at the Dogwood Stage, who rocked the crowd with their sound. While they were playing, I went back to Gelato Brothers because my day just wouldn’t have been complete if I hadn’t.

At 5:30 we made our way back to the VIP section to watch Maggie Rose. She brought great energy even as evening was approaching. Next up were The New Respects and while I enjoyed the other bands, I was particularly taken by them. They were not only very talented, but they also interacted with the crowd a lot and joked around throughout their performance.

It was about 7:30 and we went back down to the VIP area where we would stay the remainder of the festival. Soon after we got down there, The Dirty Guv’nahs made their way onto the stage. As they were playing, the sun started to go down and people started handing out glow wands. I had a fun time with those because when I put them against my hand, they made colorful little dots.

After the Dirty Guv’nahs had done their part, they brought the other bands that had played during the day on to the stage and they played together. Urban Daughter and I sat down with some cookies that we got from the Batch It food truck and enjoyed listening to all the bands.

At around 10:30 the festival ended, and we headed back home. I am glad that it was a local event because I was very tired by the time we left. The Southern Skies Music Festival was so fun, and I hope to go again next year.