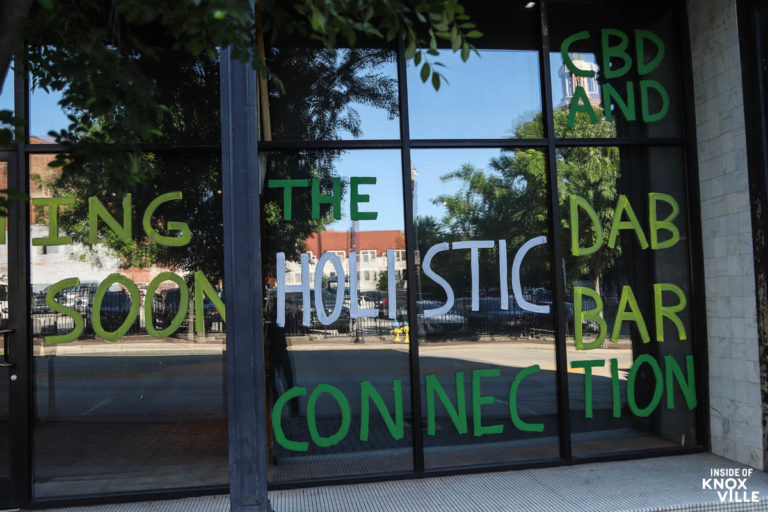 In a surprising development, legal cannabis sales will soon take place on Gay Street. The Holistic Connection, a Nashville-based business with numerous franchises, offers “legal handcrafted cannabis and cannabis products.” Owned by Mike Solomon, this first local franchise will be operated and owned by Rekesh Ali, and father and son, Patrick and John Slota. I met with the group to understand the concept and what we might expect.

Mike said, “We are a vertically integrated cannabis company in Tennessee — and obviously, when we say ‘cannabis,’ we mean hemp-derived products — but we don’t only mean CBD. It is legal, hemp-derived THC.” He said the company has worked with universities on “millions of dollars of research.” He said they formulate products for many other companies, as well. “Through all that trial-and-error, we learned how to make legal, safe, fun, recreational, hemp-derived THC products.”

He said there are new cannabinoids being discovered routinely now that research is growing so rapidly. “Some have awesome health benefits, some have recreational benefits, some have both.” He said the impact of the chemicals is dependent on usage, likening it to sipping a drink or downing a bottle of alcohol. The business has “budtenders” to help customers select the right products for them. He said that all managers will have their ABC certification, though that isn’t required. They also restrict business to customers 21 and over, which isn’t required.

He started the company in 2019 and currently has nine locations, primarily in middle Tennessee (four are in Atlanta). He said there are seventeen set to open in the next twelve months, including the location on Gay Street. He sees fewer constraints in the future, not more. A recent move in the Tennessee legislature to ban Delta 8, one of the strands available around the state, died when the finance committee looked at the cost of enforcement and the loss of tax revenue.

Mike is originally from Nashville, but came to Knoxville to attend UT. “I bleed orange and have season tickets,” he said. After college he moved to California where he worked initially in logistics. While there he started growing medical marijuana for thirty patients through the Green Goddess dispensary in Malibu.

When he and his wife decided to return to Tennessee, “We wanted to bring a taste of that legal cannabis market to Tennessee.” They began growing hemp and research led to the products they produce for the shops. All products are grown in Tennessee by the company for their own use, using organic processes.

They’ve chosen to regulate the products themselves, in the absence of outside regulation. Dosage is carefully monitored in the products, which he said can be quite different from the products you might find in a convenience store, for example. “We test it through four stages of manufacturing and it never leaves our chain of custody.”

He said the business is designed to be similar to bars in Amsterdam where products can be purchased and taken out or sampled and enjoyed inside the business. In addition to counter sales in front of the business, a rear space will offer comfortable seating, an additional bar, and more. He wants people to enjoy coming in and sampling the products and he said the model has worked very well at the other locations.

The franchise owners are all from Nashville, as well. Patrick Slota, his son John, and Rekesh are entering the venture together. John and Rekesh attended UT Knoxville and knew each other there, though they were a year apart. Last fall, while working at one of the Holistic Connection locations in central Tennessee, John invited Rekesh to visit. The two quickly agreed they should open a franchise and Patrick joined in to produce the location in Knoxville.

Rekesh said at first he was “flabergasted” that you could show up at a bar and “do cannabis.” He said he’d seen it in California, but he never expected it in Tennessee. “Ten minutes it and I knew I had to have one of these. I’m sitting here where it is happening in my state and I’m like ‘If I don’t jump on this I’m going to regret it the rest of my life.” He said the idea of working for himself was appealing.

Rekesh stayed for several years after college, returning to Nashville when the pandemic hit. His degree is in Aerospace Engineering and he has returned to live and work in Knoxville as an engineer. Essentially, he’s been in Knoxville for eight years. Patrick has lived all over, spending years in IT and then real estate. He continues the real estate work, but he was intrigued by the concept of the cannabis business.

The products will cover a wide range from gummies and cookies to brownies and jell-o shots. They have will have infused drinks, such as tea and THC infused mocktails, as well as flour with THC. Also included are “vape rolls and straight wax.” They will have an extensive range of CBD oils, tinctures, salves useful for a number of health issues. They will also sell t-shirts, hats, and more. Patrick added, “The company is coming out with a line of sauces and other condiments.”

Patrick said, “We want this to be an experience. We want people to come in and hang out for a while and be comfortable.” Rekesh said having people settle in for a bit will give them an opportunity to educate people further about what they have to offer. He said that it is important that they make a good presentation with the product in order to rise above any stigma people might have coming in.

Rekesh said he used to live in Fort Sanders and work in the JFG building and he loves downtown Knoxville. He’s looking to get an apartment nearby and when it came time to look for a location, he wanted to be in the center city. They also felt in downtown they would be a part of a community and would have great exposure for the business. He also feels it fits the recreational nature of many of the businesses in downtown. They hope to expand from here.

John was working at the Belle Meade location when I met with the other three, but we spoke by phone. He said his degree is in biochemistry and he wanted to stress that the product is all natural, grown in Antioch, Tennessee. He said some people confuse it with synthetic products. He said the door for this industry was opened by the 2018 Tennessee Farm Bill making hemp derived products legal. Beyond that he said people should expect a “fun, cool place,” saying there will be televisions, games, music, and events. He added that they will have a beer license.

They hope to be open in late June and expect to be open seven days a week.