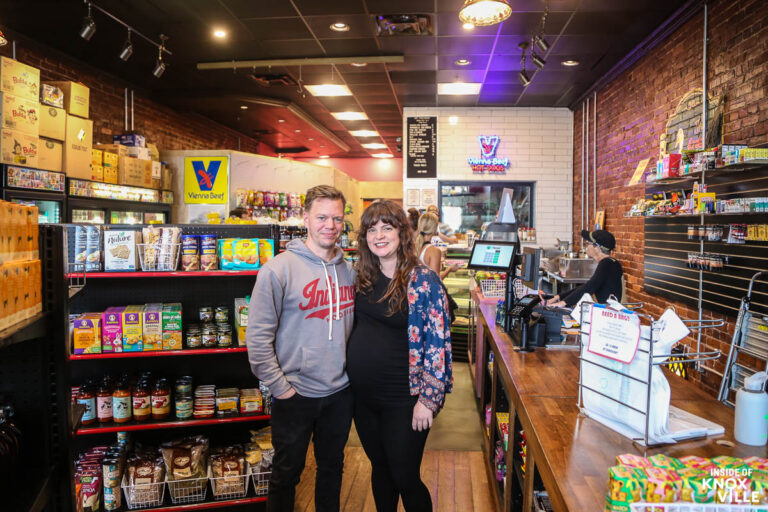 Red Panda Grocery opened over the holidays serving up groceries for all your needs in the Old City. A downtown grocery store has long been the white whale of downtown retail. Downtown residents longed for one and downtown and downtown detractors pointed out its absence. Now it is here and we’ll soon learn whether the enthusiasm translates into a level of support adequate to sustain the new business.

I stopped in for a chat with owners Jesse Newmister and Margaret Stolfi (and almost got to meet their young one who is due this weekend) to learn about the launch and their vision for the business, as well as what is offered. The volume and, more particularly, the variety of what is offered is well beyond what I’d hoped for.

They officially opened the doors December 23rd simply because the staff of seven (in addition to Jesse and Margaret) was present and stocking shelves. They unlocked the door to see if people would start wandering in. “The first transaction was laundry detergent, Goody’s headache powder, and a couple of packs of ramen. It was perfect. That was what we are going for.” They opened the doors officially the next day.

The two said there has been a mix of people so far. Margaret said, “People who live downtown who have been excited to see what we have. We’ve had accidental people, as well.” The two said people are coming in (as I did) to gauge what is available that they use. Jesse said they’ve been taking suggestions and will continue to do so. As a result the inventory is likely to evolve.

The two started planning the grocery store about “three weeks before we knew she was coming,” Jesse said, referencing their coming baby. They began measuring the space and ordering shelving. “We knew there was only so much we could stock . . . and then we started ordering and ordering and it was a lot.

So far, foot traffic determines some of their volume. They mentioned that on nicer days business goes up, even on holidays. New Year’s Eve was a warm day and business was good, with people buying “sandwiches and mixers,” as an example.

One retail space not to be overlooked is the walk-in cooler. There were two already installed in the space and one will be used to store items, but the other is open to customers. It’s where you’ll find the large packages of beer, as well as a large number of vegetables. Among other things, I found grapes, carrots, broccoli, avocados, asparagus, grapefruit, cabbage, limes and lemons.

Jesse shops at Lucky Asian Mart and said that’s where he got the idea. They really want people to know they have produce and to buy it because it has a limited shelf life. Jesse said the goal with the vegetables is to have what most people need to make a meal.

Generally, they said the goal was not to be a gourmet market, but to serve gourmet cooks as well as most of the rest of us. He said he didn’t want the store to be intimidating, but he wanted some surprising items that more advanced cooks might be seeking. “It’s just a neighborhood grocery store. I want people to be able to come in and get enough stuff to cook a wholesome meal for themselves.”

Margaret said they do have a large number of natural or organic items. She said they want to have good quality food and the smaller distributers, who they work with, often carry those products. “We also have a lot of dairy-alternative and gluten-free products, as well. I asked about milk and was assured you can find your whole milk, skim milk or almond milk readily available. “Milk, bread, and eggs, all available. Sugar, flour, gluten-free flour, cereal, oatmeal.” They expect inventory to grow.

None of their meat is commodity meat. The beef, Jesse said, “It’s all smaller mid-west farms. The pork and chicken is all natural.” On a typical day he said, “We’ll have NY Strips and a couple of other beef cuts, pork chops, chicken breasts, wings (marinated and plain).” He said they will probably have pork tenderloin. They have Vienna Beef hot dogs for their Chicago dogs. You can cook your own or they will cook it for you. So far, their seafood is frozen or canned, but most meats, either seafood or otherwise, the store can get for you within a day if you request it. Jesse mentioned oysters, for example.

Like a New York City bodega, they have some hot foods they can make for you. “It just gives it a little bit of a neighborhood feel. We are offering sandwiches that aren’t readily available, like the Italian beef and the Chicago dog. They also have breakfast sandwiches and a range of other sandwiches, such as Cubans and Steak Teriyaki. They said they will probably offer a rotisserie chicken.

While you’ll find them on Instagram and a web page is coming, they say the best way to learn about the store and experience it, is to drop in. They want you to do your weekly shopping in the store and to get to know their employees who are knowledgeable about the food (two are chefs) and can talk to you about recipes and food preparation. “We want to provide a better grocery buying experience.” They are still looking for a couple of part-time employees.

From the produce on, you’ll find that they have worked hard to price their food competitively. With small margins, the store (like all grocery stores) will require volume to survive. Some prices will be slightly higher because their costs as a smaller business are higher.

The store will be open seven days a week, from 9:00 am to 7:00 pm Monday through Saturday and 10:00 am to 5:00 pm on Sundays. Hours may change as they learn more. Follow them on Instagram for the latest on what’s happening.