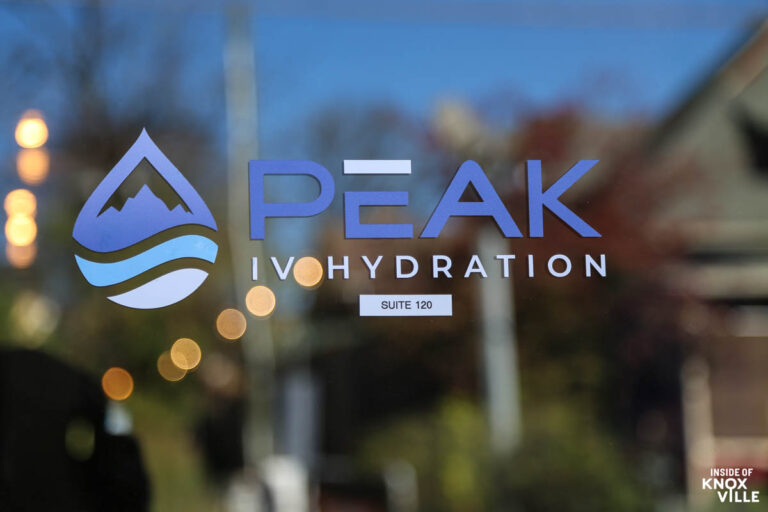 While his ultimate dream of owning a stand-alone IV Center may have not been fully formulated when he played outside South Knoxville Elementary as a child, with yesterday’s opening of Peak IV Hydration just a half block up the street, Cory Maples has come full circle. The new business places him in the center of the part of town where he grew up and he’s happy to bring his idea home.

His family moved him to Seymour when he was a little older and that’s where he graduated high school. He moved around a bit before returning to Sevier County where he worked for the Gatlinburg Fire Department and then became an EMT, working out of a truck for 21 years. “It’s a lot of sleepless nights and seeing things you wish you could unsee.”

After wanting to own a hydration center for a long time, he left his EMT job in August 2021 with that goal in mind. “I always saw a need as I took people to the hospital who were dehydrated. They would sit around the ER for hours when all they needed was an IV. They just needed some fluids.”

It’s taken him the full fifteen months since leaving his former job to get the new business up and running. He’d never contended with permitting and inspections, so that presented a learning curve for him, and to some degree for them, since this is only the second such business in the area. There were delays with a sidewalk issue out front, designs to develop, and construction to complete. The building had been a warehouse, so his portion had to be built out from scratch.

He’s also had the at this point predictable issues with the various supply chains. “Currently I’m on back-order for most of the vitamins I want to offer. I have some that are being processed and being shipped, but for now I’m only able to offer basic IVs which consist of salines and electrolytes.” He’s hoping to have them all in supply within the next few weeks.

He and his wife Hannah are the sole owners of the business and it’s not part of a franchise, though he has hopes of owning more centers as this one gets established. Hannah works for Altard’ State. “We’re just the two of us doing this. We don’t have a corporate team to fall back on where they have a supply to ship us. We’re learning as we’re going. Things are coming together and it’s a fun process.”

They also have massage chairs, including a zero gravity chair. They will offer B12 injections and they have Frog Kombucha. They will have oxygen, as well. He was delivered defective machines there, so he’s waiting on replacements. He said they also have plans to ad some proprietary elements he’s not ready to reveal.

He said there is a wide target audience for the service. “My main market is geared toward college students and athletes. Most of us are walking around daily with a level of dehydration. Anyone who has been seriously ill is likely dehydrated. Go for a jog and you’re dehydrated.” He mentioned the usefulness of his hydration service before a night of drinking or afterwards to recover more quickly. Pre and post hydrating before athletic events is helpful. “There are also a lot of people who have vitamin deficiencies. One of friends has Crone’s Disease and he needs anti-oxidents to help his body recover. We’ll be able to infuse all that and keep you out of an emergency room.”

To make sure that any service offered is safe, a patient history taken before services began in order to ascertain the appropriateness of the procedure. He mentioned people with Kidney issues as an example of someone who might not be appropriate for the service. Dr. Elizabeth Hull serves as Medical Director for the business, bringing twenty-two years of emergency medicine experience. Cory provides services under her.

He’s happy to be back home and to finally see his vision realized. “I’ve always loved this area. It’s good to feel back home and it’s good to see this area growing. I’ve wanted to do this for a long time and the timing and location came together.”

While the shop officially opened yesterday, he’s hoping to have a grand opening soon, but wants to get everything in order before that happens. The shop is open Thursday through Monday from 10:00 am to 6:00 pm.