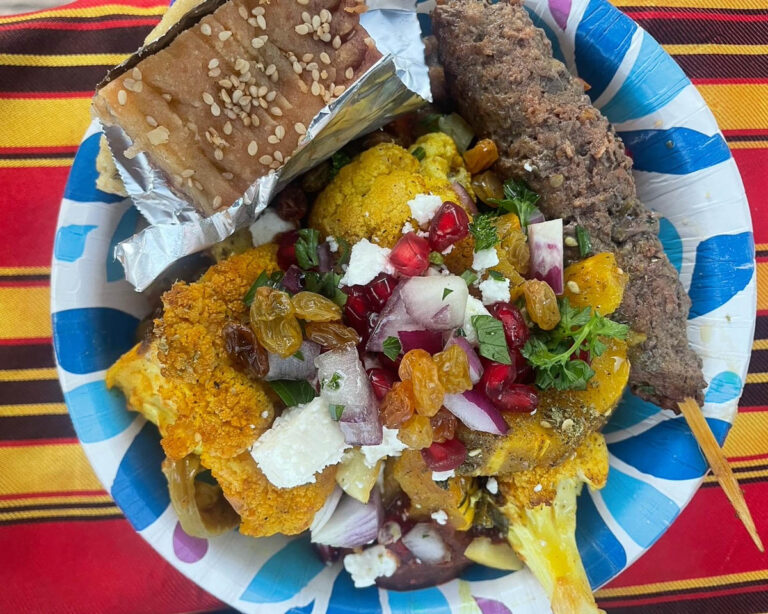 Tarik Becha is not new to Knoxville, but his growing business is. Tarik’s North African (formerly Mina’s North African) opened on May 28, 2022 in Real Good Kitchen and has become a staple at Crafty Bastard, Alliance Brewing, Albright Brewing and in private catering since. His mission is to make good food accessible and to create food memories that keep you coming back for more.

Tarik grew up in a beautiful mountain village in Algeria called Tizi Ouzou where his first language was Berber. In school, he learned Arabic and French as well. He only began learning English as an adult when he met his future wife. He has been in the States since 2014 when he married that Knoxville native, Allison. The two met in Paris at a market where Tarik was serving seafood. Allison was there to study French. She couldn’t speak much French and he couldn’t speak English, but when he asked her out for drinks, she said “oui” and the rest is history. She now helps him with his restaurant.

Tarik began cooking as a child. He did not have formal culinary school training but learned from hands-on experience with his cousins and his mother cooking for weddings and at home. His first responsibility was chopping vegetables. When he turned 18, he moved to Tunisia for his first professional job cooking. He soon moved back to Algeria to continue work in the restaurant business. He is well traveled and learned much from his visits through Greece, Turkey, Serbia and Paris.

In his village, families make their own olive oil and prepare their own spices. Tarik’s mother grows her herbs, picks them, dries them and sends some to him to support his business even from afar. He uses those spices in his cooking daily. He says his kitchen now smells just like his mother’s kitchen did as he was growing up.

If you have had his food, you know that couscous is a main staple. You may also have noticed that the portion of couscous is quite ample. He laughed as he told me many of his customers comment they will not be able to finish such a large portion, but almost always clean their plate. Tarik steams the couscous and serves this with vegetables and protein such as chicken or lamb. Couscous is a grain that is easily digestible, and this is why he says he serves larger portions.

Along with the Imazighen couscous he serves, he also serves Kabyle bread. He makes these items the using the same recipe and techniques his people have always used. He steams the couscous rather than boiling and prepares the Kabyle bread in a cast-iron skillet on the stove. While there are ways to produce a larger quantity of the bread, it is important to Tarik to make and serve it in small batches as this is the way it was served in his home. Tarik wants every person eating his food to feel the love and care in his food and the authenticity of the history from which it comes.

Another way he honors his culture is by using the Amazigh symbol, which is on the Berber ethnic flag, on his logo. Tarik spoke of political turmoil in his region and the importance to him of preserving the foods and the language of the Imazighen people. I learned more about this conflict here and here and found an exhibit of beautiful artisan work on display at the Peabody Museum of Archaeology and Ethnology.

This preservation of the food of his people is just one motivation for Tarik’s success. Another motivation is to set the tone for more international restaurant hopefuls in Knoxville to be successful in the same way to preserve their own culture. He feels this is an area he is seeing positive change but hopes for more individuals who want to share their history through food to come forward.

When talking about the political unrest and the attempts of one culture to take over another culture’s traditions, he explained to me the change to his business name. It was formerly called Mina’s North African, after his sister, Mina. However, a Moroccan company called Mina, sent a cease and desist letter to Tarik through the breweries he serves.  They have trademarked the word ‘Mina’ and want him to stop using it.  Rather than fight them, Tarik decided to keep the peace and change the company name to his own.

He does hope to open his own storefront eventually, but is happy with his partnership with Real Good Kitchen and the support he is getting from Bailey Foster and her team there as well as the community.

To find his schedule and see more photos of his delicious cuisine, check out his social media here and here.