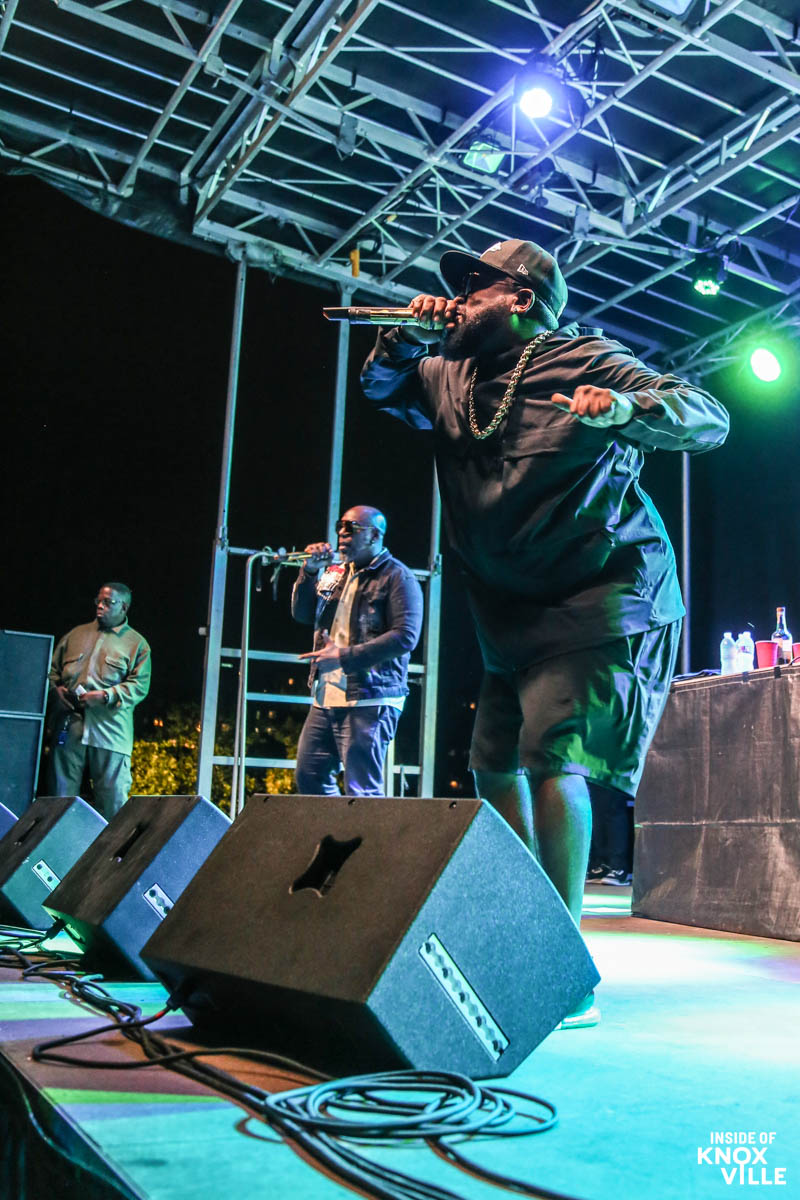 Second Bell Festival was Chill (and Pretty Cool, Too)

Why would Rusty Odom plan a music festival for cold weather? Doesn’t he know we’ve loved the warm August sunshine at the previous festivals? Seriously, while it was a little chilly, most of us would take that over the brutal heat at previous festivals. It wasn’t really that cold and, miraculously, the monsoon that was predicted all week dissipated by concert time leaving only a brief mist to fall over the two-day festival. I think Rusty must have a special relationship with the weather gods.

The festival site was beautiful and cozy and was the well-run event we’ve come to expect. Vendors lined the outside of the festival and a few were found inside. Ample bars were placed on each side of the festival grounds and an all-star line-up of Knoxville bartenders served up the goods. I enjoyed a couple of “Big Bois” over the two days. Food trucks also backed up to the site and I had two days of Adam McNulty’s Big Bad Taco Truck and loved every bite.

I was honored to attend the festival with both Urban Daughter and Urban Girl, making us a three-generation threat. Urban Daughter is a 90s girl, so she was pumped to see Superdrag and Big Boi. Urban Girl was just pleased to make the scene, even if it meant old people music (to a 13-year-old) would be featured. She brought a book just in case things got a little slow and her favorite artist was the pizza cone (though from the corner of my eye I caught her dancing to Big Boi).

Unfortunately, due to public school schedules and the time it took for them to get downtown, and then for us to walk over, we missed opening artist Connor Kelly. We walked to and from our condo each day and I was surprised to see we were the only ones walking from downtown. It’s about a thirty minute walk and not a bad one.

Our musical entrance into the festival, however, was a delightful one. It’s always good to see Adam and Serena doing their Guy Marshall thing. The music has grown better with the absence (I haven’t heard them since before the pandemic). Adam’s great songwriting, the great vocals, along with the excellent band made my heart happy, once more. Ironically, the openers for each day were the best bands for my taste, though I really enjoyed the others.

Thirty Amp Fuse gave an energetic set, making a lot of noise for three pieces. Free Women Waltzing Club was a lot of fun to watch, listen to, and photograph. The set consisted of mostly covers (90s, natch) and an original or two, supported by a rotating cast of female vocalists. They blew the roof off.

The main event of the evening was the Superdrag reunion. The band had not performed publicly in a dozen years. There may have been a few gray hairs showing around the fringes, but there was no rust in sight as the band picked up where they left off, in a set that featured older material, even though the band has recently recorded. The encore featured “Sucked Out,” the band’s major hit from 1996. It’s worth noting that the band donated their fee to WUTK as they attempt to build a new, more powerful tower. Many in the crowd mouthed the words to every song.

We arrived more-or-less on time for Saturday’s show and I’m glad we were in time to catch the Burnin’ Hermans who opened the second day of the festival. For pure personal enjoyment, they hit the spot. Their laid-back sound was the perfect way to ease into the day. A little jazzy, a little gritty without being rough, they were the perfect early Saturday jam. I’ve seen them listed as playing around town, but this was my first live shot and I hope it won’t be my last. Go hear them when you can.

I tell myself every time I attend the festival that I will make it to the comedy tent, but I have a hard time pulling away from the music, and this year was the same. We got a small taste mid-day from the Illusionist and that was fun. The line up, curated by Zac Fallon, was excellent and I’m told the tent was packed throughout the weekend.

Pitch Meeting was a bit of a head-scratcher, to me. With all the banter and calling up of musicians to do a bit, the set flowed along leaving me to wonder if I’d heard a full song by the end or just spotlighting along the way. The band was good, of course, but I’m not sure about the set.

There was no head-scratching about Temp Job. They owned the stage with their funky good time music and the crowd adored them. It’s the second time during the day I realized how much local music I’ve missed due to the recent unpleasantness. It was great to have the chance to see them in an outdoor setting.

They were also part of the diverse line up featured throughout the day. Different colors, styles, genres, and presentations. For a festival, this is no small feat, and it attracted a more diverse crowd than at other festivals I’ve attended. It reflects, no doubt, a concerted effort by festival organizer Rusty Odom, to mix things up in a good way.

Ancient Cities gave a solid performance on the Mackie Stage, followed by Benji on the Barley’s stage. Benji said it was his third time to perform in Knoxville and I think I’ve seen each performance. The first, at the Pilot Light as part of Rhythm n’ Blooms, was my favorite. I think his between-song banter plays better in a smaller venue. For a larger stage, the set seems to lose momentum between each song. It picks up again — the songs are great — but then the songs just die out and there’s more banter. He did say it had been nearly a year since his last show, so that may have impacted it.

Nick Lutsko and the $100K Band left me confused, much as Pitch Meeting did, but for a different reason. Their humor just didn’t hit me, and I’m probably not their target audience. They are plenty talented and many of the songs were good, but the humor got in the way after a while, for me. I was also taken aback because the bass player appeared to me to be in black face, though I’ve been told I was mistaken. Apparently, he simply had a dark mask and beard under his puppet wig, and I’m sure it was to accentuate that. Still, I wasn’t the only one to recoil a bit and it seems like something to simply avoid.

Palm Palm was the penultimate act and what a great show! J. Roddy Walston has a great rock and roll voice and played the role of front-man to the hilt. Charlie Glenn not only set his guitar on fire (figuratively, no Jimi Hendrix action), but he brought a panache to the event that would have served a 70s glam-rock band well. They dressed the part of rock stars, they played like rock stars, and they deserve to be rock stars. Give them a listen.

What’s left? Oh yeah, just Big Boi and Sleepy Brown, two thirds of 90s dynamo Outkast. I can complain around the edges here: They had a long intro that ate up minutes, which matters when you have an hour slot. Then they stopped eight minutes early after claiming they were going to play past the “45 minutes they gave us,” which wasn’t true; it was an hour. Then there was the impossible job of trying to photograph them with their back lighting, purple lighting and darkened front end of the stage. But being photo-friendly isn’t their job.

So, were they disappointing? No way. Everything that made Outkast so special, from the intelligent, clever lyrics, to the the melodic interludes, and the self-deprecating humor were on display. They played virtually non-stop and there were no lags in the energy. Ms. Jackson was my highlight, but I’m sure everyone had their own. I’d love to see them in a full-concert setting and they definitely left the crowd wanting more.

It was a very well run and successful festival with some extra money shoveled to WUTK and XHunger. It was awesome to run into old friends (Hey, Ricky!) and to hang out with people who love good music and many of whom love each other. It’s a mystery more people didn’t join in the early shows, which were among the best. I’ve pumped a lot of pictures between the text, but be sure to check out the full lot of 130 below. Enlarge and enjoy.