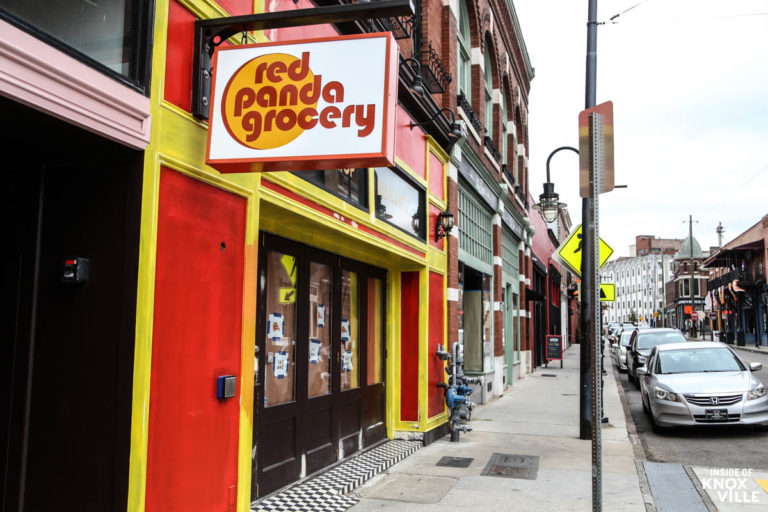 There are themes that run through the dozen plus years I’ve written about downtown. The interest in parking and homelessness sometimes seems bottomless. Both topics pale, however, to the topic of a grocery store. Non-downtown residents seem to obsess about it as much as downtown residents. Husband and wife, and multi-business owners Jesse Newmister and Margaret Stolfi (Kaizen, Tako Taco) have decided to make their own statement in the conversation by opening Red Panda Grocery at 123 South Central Street, most recently home to Hen Hoc Butcher shop.

It’s important to note that the conversation would have been a head-scratcher to citizens a few decades back, as a White Store operated on Market Square and then at 402 South Gay Street, where Mast is now. The first occupant of that building was also a grocery store, the McNulty Grocery and Dry Goods Company.

Even in the current era we’ve had several places that have sold groceries to one degree or another, such as Aisle Nine (2010-2015), Just Ripe (2011-2016) and even Jay’s Megamart (1970s to 2015?) which carried canned goods and lots of sundry. That’s not to mention The Market, currently operating at Union and Gay, which has a range of grocery items. Still, non of the above seemed to be quite what people meant when they said they wanted a downtown grocery store.

With the opening of Red Panda Grocery, Jesse and Margaret are hoping to offer what current downtown residents most need. The idea sprang with the closing of Hen Hoc. Jesse said they talked to Hen Hoc (and Oli Bea) owner Jeffrey Dealejandro and to building owner Thomas Boyd about their concept for a small neighborhood grocery, or bodega, and they agreed it was a good one. Jesse told me that in their travels they love finding a good independent bodega.

The driving force, Jesse said was, “We thought it would be good for the neighborhood.” They quickly went to work and named the concept “Red Panda.” Jesse pointed out that each of their other businesses have animal mascots, the Maneki-neko for Kaizen, and the octopus for Tako Taco, so they wanted to follow that thread. The panda presented itself because it was once native to east Tennessee and Zoo Knoxville now has one of the most successful breeding programs in the world for the animal.

The store will have a combination of fresh foods and staples. Jesse said they would try to stock the most common items that might prompt a downtown resident to take the car out of downtown and, hopefully, render some of those trips unnecessary. You’ll find everything from “flour and eggs to Tylenol and charcoal.” The meat counter from Hen Hoc will remain, though it will be moved further back to make more retail space. It will contain some deli and butcher meats including beef, chicken, and pork, as well as to-go salads.

Jesse said he’ll also be able to order and quickly get items like particular cuts of meat and more. They will offer grab-and-go hot food, and breakfast and lunch sandwiches, as well as prepared foods that can be cooked at home. They’ve specifically hired workers with kitchen experience so they can help cook items or direct customers how to do so. He said they want it to be “a good personal shopping experience.”

In addition to moving the butcher case further back, they’ve added a partition to separate the prep area from the front. One of the walk-in coolers will have additional shopping space, and they’ve added shelving inside the store. With the added space, they will not only be able to offer staples, but some international foods, including candies. You’ll also be able to get a charcuterie plate to go, as well as beer and desserts.

“At the end of the day, we’re trying to help everyone downtown not get in their car for the simplest things.” He said they loved the neighborhood feel of the butcher shop and wanted to keep that, while expanding offerings. He said they aren’t trying to “invent anything,” but simply to be of service, just like a good bodega in your favorite big city. Their list of items is and probably will continue to evolve.

They’d hoped to be open earlier, but the pressures of operating two businesses while trying to open a third pushed the date back. They also changed point of sale from the system they use in their restaurants to one more suited for grocery items and that took some time. They hope to open in about three weeks, with hours seven days a week from 8am-8pm M-Sat and 8am-5pm on Sundays.