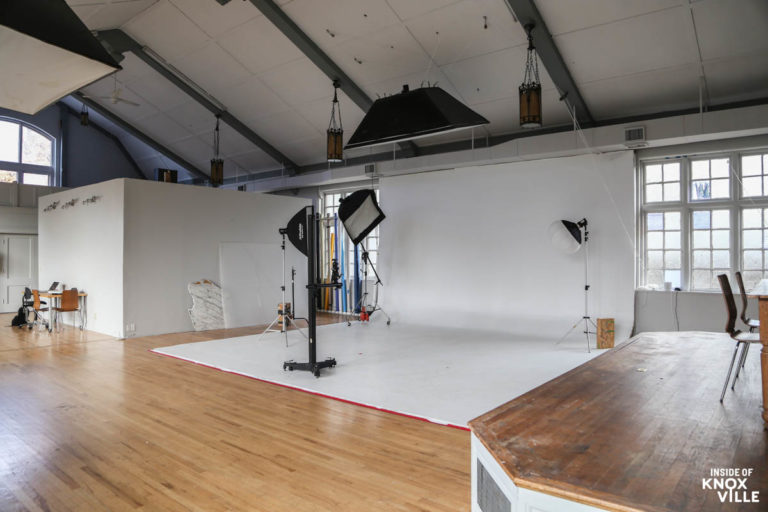 PopFizz, a Knoxville founded and based production company founded in 2013, has expanded to include a building near downtown. Located in the Fourth and Gill neighborhood at 800 Luttrell Street, the new location in a former church, gives the company increased flexibility including a new production facility, as well as a second optional location for employees to work each day. I spoke with Ben Fields, Director of Photography, to learn more about the company.

Bryan Allen, owner and managing partner, started the business as a two-person shop. An early success for the company was the television show, Tennessee Valley Uncharted (you can watch all the episodes at that link), which they shot for five seasons with partner Design Sensory. They also started agency work partnering brands through marketing agencies making ad and social media content. They did both video and still photography content for their use.

They began working with Scripps (now Warner Brothers/Discovery) providing video support for HGTV, DIY, and the Travel channel and more. They provided some on-air footage, but focused more on social media assets and content for their digital channels. “This is in 2013 . . . folks are getting rid of cable tv and shifting to social media, but it wasn’t what it is now. Video on your phone wasn’t a big deal.”

By 2020 they had expanded work with the state of Tennessee when Randy Boyd was the Commissioner of Economic and Community Development. They produced video and still photography for the five counties with the most difficult economies of the 95 in the state, with the idea of accentuating their best selling points in order to entice economic development to their areas. They partnered with Design Sensory who made a website for the counties to utilize the content. They were also working with Axle Logistics and others.

When the pandemic struck, “every single project we had on the books canceled. There was so much uncertainty.” Brian determined they would keep all their employees as they were the company’s best asset. They decided to make their company the “safest production company there is.” Three producers designed a plan to develop the safest protocols possible for video production. “It really paid off because when Discovery came to us and said ‘we have to start back up, can you develop a plan,;” they offered what they had already developed and Discovery promoted it as a model to other production companies.

As demand for content went up and the ability to safely make it became more challenging, some clients began shooting their own video on iphones and sending it to the company for editing. “We became a post-production company for a few months. That was the most trying ever time in the company. We kept everyone in the company, thanks to PPE and Bryan, who showed a lot of integrity.”

The company was located off Lovel Road in a building they shared with with Design Sensory, from whom they leased. “They really gave us a head start by giving us anything they had need for . . . They kept our pipeline full as we got started and treated us like an in-house resource.” As they grew, Design Sensory built out another part of the building for them in 2018. Most employees continue to work in that space on a daily basis, but the new space gives them tremendous flexibility.

Ben is particularly excited about the permanently affixed, large, cyc wall in the new space. He said as a small company they were often scrambling for one and now not only do they have the wall at their disposal, but they can help other companies or photographers who made only need it for a small shoot, but don’t have a large budget the walls usually command.

Last week the company offered head shots, along with local beer curated by Zack Roskop all from breweries within three blocks of their new space, as part of their Grand Opening on First Friday. Head shots are one of the services they offer, along with their mainstay, the production work. The Grand Opening was a great success and the company felt very welcomed by the neighborhood.