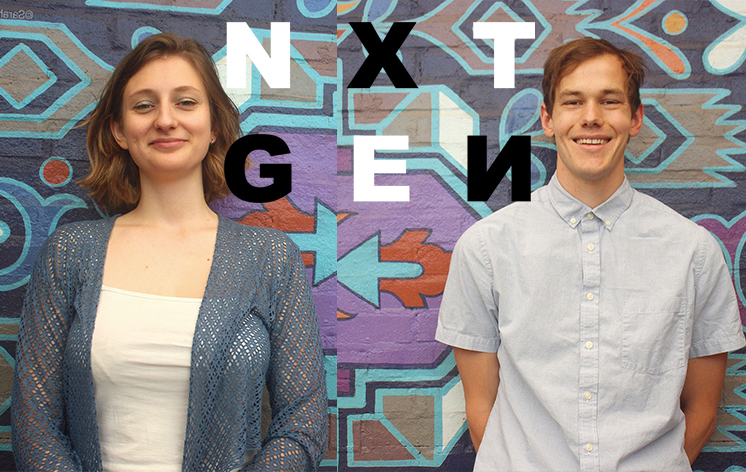 How does a musically talented young girl growing up in a small Italian town and a young man growing up in a small Appalachian city, find themselves on stage a few years later to perform a style of music neither were exposed to in their youth? It’s one of the intriguing storylines as the Knoxville Jazz Orchestra presents the second in its Nxt Gen Series.

For twenty-three years, the Knoxville Jazz Orchestra has wowed audiences with their big band sound, as well as a number of smaller iterations in side projects. Including seventeen of Knoxville’s finest jazz musicians, the group has been blessed with extreme stability — and therein lies a problem: After 23 years of performing, thirteen of the original seventeen members remain. Knoxville’s up-and-coming jazz musicians rarely get a shot at joining the professional organization.

With an average, so far, of one opening each six years, where are the younger musicians to go? Within that question lies the genesis of the new Nxt Gen Series: To showcase younger players. The next performance in the three performance series happens this Sunday night at the Old City Performing Arts Center and features pianists Sam Adams and Margherita Fava. I sat downtown with KJO Director Vance Thompson and the two young performers to learn more about the two performers and what we might expect when they take the stage.

After growing up in a professional musical family, her mother plays “Medieval music” and her father plays “baroque,” her parents sent her to a workshop when she was eighteen. Hosted by The New School, in a city near Venice, a few faculty members worked with young musicians for a week. “I went there completely ignorant of jazz . . . I was playing classical music . . . within the course of the week, I knew that’s what I wanted to do.”

Margherita moved to the U.S. in 2016 from her native Italy, specifically to learn jazz “in the country where it was born.” She attended Michigan State University where she obtained her bachelor’s degree in Jazz Studies in 2020. She moved to Knoxville to continue her studies in the Jazz program at the University of Tennessee, receiving her MA in 2022.

She intends to have a career as a jazz “performer and entrepreneur.” She’s living in Knoxville and teaching at Lee University in Cleveland while “performing and teaching in Knoxville.” She’s primary a pianist, though she’s studied other instruments, as well.

Sam is from Knoxville, but attended college in Minnesota to study sociology and anthropology. “I’d always played in bands . . . and my senior year, kind of on a whim, I was taking some jazz piano lessons and started realizing that the artists I loved in the funk and R&B world were having musical conversations” involved jazz. He began tracing those roots back to other artists and soon, he said, “I was hooked.” After graduation, in 2015, he turned down a job offer in his field “and I came back here to practice.”

He said his parents were supportive though perhaps a bit “jarred” to learn of his intentions to become a professional jazz musician. Deciding he wanted to take some lessons, he called UT to find a teacher and found Donald Brown. “In that first lesson we clicked and it was overwhelming how much musical information he had.” He also studied guitar under Mark Boling. The two convinced him to take classes and he eventually got a second BA from UTK in Jazz and Studio Music. He continued working in the Knoxville music scene and then returned to get his MA from the UTK Jazz Program. He plays jazz primarily, but still dabbles in other genres.

Vance said, “There are so many good, young, players right now that are active in town, but there’s not a listening venue for them to play, other than what KJO sets up . . . One reason (for the series) is to introduce our audience to these young players.” As the sole staff member, Vance also recognized that younger people need to learn what is involved in running the organization and setting up a concert or a series. He feels it is important for the longevity of the organization when he eventually departs.

He selected four young players and approached them to see who might be interested in planning and executing the series. Pianists Sam Adams, Margherita Fava, Taber Gable and guitarist Jack Roben all said, “yes” and planning began. They developed the concept and selected the venue. Margherita had experienced the venue in Big Ears and liked the intimacy and versatility. They worked through the budgeting process and all the other details that go into setting up a series.

Taber and Jack presented the first concert and the four will come together with others for a big band performance on November 6. For this Sunday night Sam and Margherita will take turns on the stage. Sam will present the music of Donald Brown, while Margherita will focus on the music of Roy Hargrove, with whose bass player she studied at Michigan State. The two played duets for fun when they were in school at UTK and they’ll reprise that fun at the concert.

If you’d like to hear what KJO is all about, you can do that tonight when the full orchestra presents the music of Ellington and Strayhorn featuring pianist Eric Reed. It’s the first of their five-show season and happens at the Bijou at 8:00 pm. Ticket’s for tonight’s show may be found here and full season tickets may be purchased here.