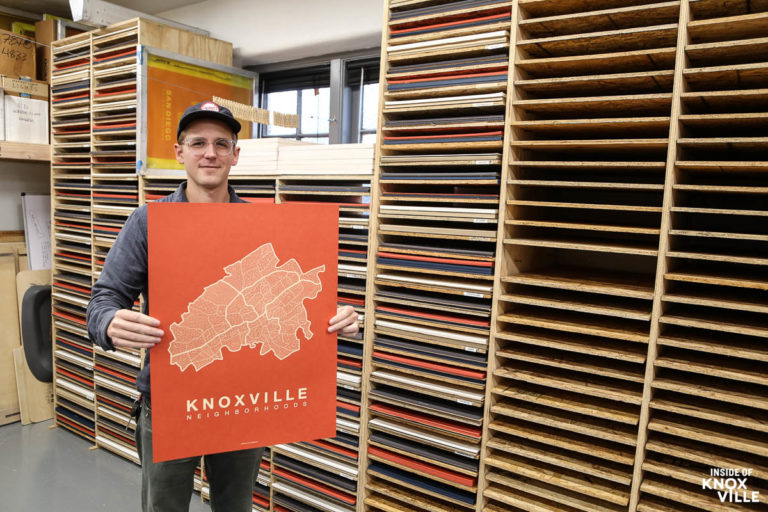 When Native Maps founder and owner, David Harman, purchased the building at 800 Luttrell Street in February, it marked another turning point in the business that has grown from very small to a very successful level in just a few years. The company, founded and rooted in Knoxville, is one of several examples of Makers who have grown their side-hustle into a full-time, nationally known business.

David purchased the 1927 building from long-term owner Charlie Brooks. Brooks, a photographer, had owned the building from around 1980 when his photography studio was displaced from the area around what would become the World’s Fair Park. While the building had been a church originally, Charlie bought it from a local civic group. It remains a work-in-progress. “I’m slowly trying to clean it up and turn it into a more functional, presentable studio building.”

Carpet is being removed, walls painted, and windows repaired. David was able to get a Historic Preservation grant from the city, which he is using to repair and return the windows to their original state along the front and one side of the building. The grant requires the owner pay a third of the costs and David has enlisted Open Door Architecture (who lease their upstairs studio from him) to help him in that project. He said the other windows and various projects will wait until he has the funds to pursue them.

Over the years, Charlie leased out the lower-level spaces to the lower-level studios to artists and David has continued that trend. In addition to Open Door Architecture, and Popfizz content production company, which I profiled last week, he has quite a range of creative tenants. Maria Antoinette Loggins (an influencer and content producer with over a quarter million subscribers to her Youtube channel), Victoria Walsh (Macrame Momma, KnoxCrafts (helping makers connect to businesses)), Allie Biddle (designer and artist), Carrie Jobe (artist and co-owner of Tristar Arts), and Shelly Mangold (the longest-term tenant, painter, smango500@gmail.com). The building includes a common space for use by all the tenants for relaxing, hosting meetings, or simply for a change of scenery from their studio space.

David is originally from Dallas, Texas. He and his wife, Becca (who co-owns Native Maps), both of whom got their undergraduate degrees from the University of Dallas, moved to Knoxville for him to attend graduate school in painting at UTK and for her to pursue graduate studies in Agriculture. She’s originally from Nashville, so it was relatively close to her family, and she now works with a company involved in socially responsible use of carbon credits.

Prior to their move, David had a studio in Dallas, where he painted while working random jobs in the city. Focused on landscapes and his surroundings. He realized there were parts of the city he didn’t know, even though he loves Dallas and grew up there. After extensive exploration and research, he put together a map of the city with the various neighborhoods, “sort of as a dare to myself, to see if I could. The idea of a local movement, wasn’t a thing at that time, so it was a novel idea.”

He produced a screen print and started selling it at a nearby market. It took off, with a couple of stores picking it up. That was about the time he moved to Knoxville, and he was happy they continued to take the maps as sales supplemented their income. He used the print-making department at UT to continue production.

Halfway through graduate school their first child, Auggie, was born. “It was a wakeup call: How am I going to support myself as a painter.” About that time, he had done a pop-up with West Elm who was partnering with Etsy to help local makers. “The awareness of makers was starting to grow.” He returned to Dallas for the event, and it sold well. He approached the manager at West Elm about stocking the maps and she was very supportive and agree to send him a monthly check for sales, with no commission.

Eventually, West Elm added a local line to each of their national stores and asked if he could make maps for cities other than Dallas. It was a move that was already on his radar. In 2014, he named the business Native Maps and West Elm became his first account. He launched with six maps and has added more each year, recently launching nine to bring the total to fifty-nine city maps, so far.

West Elm subsequently flew him to a conference to speak to other makers. A grant competition they hosted for makers found Native Maps placing second but getting a massive boost to their Instagram followers (they now have about 22 thousand). The momentum drove sales on the website (which is their primary revenue source) and other stores came on board.

When David finished graduate school, the company was on its way. “I started doing Native Maps the next day. It’s been my full-time gig ever since.” 2020 saw a major surge in sales, as was the case for many e-commerce companies, marking their best year. The surge in sales (along with a PPE and SBA loans which were part of the pandemic stimulus) opened up the possibility of purchasing the building they now enjoy and allowed him to bring on a full-time employee (Jake Ingram of Jackalope) and engage a marketing company.

David has also been involved in Knoxville’s larger Maker City movement. After graduation, he wanted to connect with other business owners, and began meeting regularly with others, like the owners of Striped Light and Central Collective, among others. “It started to galvanize that there are a lot of creative people here . . . and I think that is really unique to Knoxville.”

He was also becoming involved with the Knoxville Entrepreneur Center and so was aware when ETSY sent out their first call for a city to be named their “Maker City,” and to plan a summit around that designation. He, Nanci Solomon (owner of Rala), and Joy O’Shell (then Outreach Director at the Entrepreneur Center) became a team that pursued and won the designation and hosted the first Maker City Summit. Along work from Alana Smith (Cold Gold Jewelry) and Miranda Vandergriff, the conference was a major success.

“It showed the connections that already existed in Knoxville. By calling it the Maker City, we just named it. It was already here. And it was like pouring gasoline on the fire.”

If you’d like to check out all the maps, you can do that here and you can follow them on Instagram. You will also find them locally at Rala in the Old City. As exciting things unfold at Sunday Studio, you can follow along here.