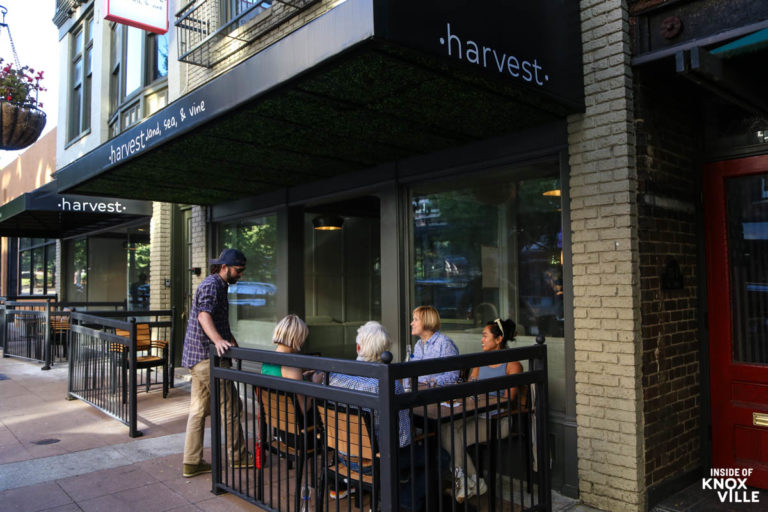 I announced last April that Harvest planned a second location to be on Gay Street. Those plans came to fruition recently when Harvest opened at 141 South Gay Street. As I did last April, I spoke with Nama Hospitality (owners of a series of restaurants including Nama, Koyo, Harvest, and Wicked Chicken) Director of Operations, Josh James about the opening.

He said they’ve been open just over a week, but still consider themselves in a soft opening. The first two weeks they’ve offered dinner each night and brunch on the weekends. They will launch lunch within the next week or two depending on when they feel ready. They will also extend their hours soon and have a limited bar menu during the late-night menu.

The menu for the new store is very similar to the west location, but there could be slight differences. They’ve already added in a couple of the late-fall/early-winter dishes at the new location and not at the original location simply because the fall menu was so close to debuting. The core of the menus will be the same at each location, guided by the corporate chef, Chris Bowman, but the chefs at each location also have some latitude in selections like chef cuts and components of the charcuterie boards. Chef Victor Hobbs, who has been with the company for nearly ten years, will be Chef for the downtown Harvest location.

“Our tag line is land, sea, and vine, so it is hand cut steaks and fresh flown-in seafood,” but he said it is the creativity from the chef team that makes the difference. “You see the seasonality come into the menu. We just started leaving tomato and okra season. Now you’ll start seeing the butternut squash and later on cranberries in the colder months. You’ll see them start to play with those ingredients . . . Seasonality is really what is at the core. That’s why our name is Harvest.”

“We try to buy responsibly sourced proteins, as much local dairy and produce as we can. We keep things fresh and give you something that you feel good after you eat it. We try to pick out good food and handle it with care so you get something special on your plate. Our job is pretty fun. We get to do good food.” He said, as an example they source food from Benton’s Bacon, Sweet Valley Farm white cheddar, Anson Mills grits, JQ Dickinson finishing salts, Cruise Farms dairy, Noble Springs goat cheese, and more.

I asked for some of the customer favorites as I planned to eat there the night we spoke. He immediately said, “We have the best deviled eggs . . . We have a phenomenal blackened shrimp and grits. It has an Appalachian twist to it with field peas and our grits in a grit cake . . . we always have a fresh pasta feature, but our current one is a carbonara and it’s always a favorite . . . we really enjoy burrata.

“We try to keep it fun. Typically when we bring on an item it will be around a few months,” before it is changed in some way. He said one dish they can never take away, due to its popularity, is the beet salad, “even if it is not in season.” He said it is always a mainstay. It’s been on the menu since they opened the first location in July, 2018. That was also when Josh was recruited into the company to help open the restaurant.

The goal for the design and décor in the new space was that it establish its own identity. “We inherited the design at the Bearden location. Koyo and now here is our chance for us to really make things the way we want them. This is a taste of what Bearden may become. We feel this ambience matches the experience we want to provide. We know we are going to take good care of you. We know we know we’re going to serve great food and great drink and now we have an up-scale, up-to-date ambience to match. It’s exciting.”

The wine list is eclectic and will grow. “We boast a ninety-plus bottle list in Bearden and have quite a bit more wine in storage in that location. Here we’re closer to a sixty bottle list. They are as similar as they can be.” He pointed out that some wines have been stored there that are no longer available, so for the downtown location, they’ve started with what is currently available. Carla White is the beverage director who has curated the list.

Over the last few months, the major work has been on a serious upgrade to the kitchen. There are a few touches that are still to be completed. They are waiting on their permanent host table, for example. The menus may also soon include scallops and crabs, as the costs of these foods are approaching a price-point they can reasonably be reintroduced to the menu at an affordable price. The price of each had skyrocketed. “We’re in a much better scenario than we were even a year ago.”

In coming months, the company will focus on getting Harvest perfectly to where they want it to be. They’ve done some work at the Nama Bearden location and they will follow that with “a little facelift” on the Harvest at Bearden. They’ve also been approached by a hotel owner about a possible collaboration for sometime in the next year-to-two.

Urban Woman and I had dinner there later in the evening after my interview and it was as wonderful as promised. We pretty much followed the recommendations and weren’t sorry we did. We started with cocktails and she tried the Lillet Rosé Spritz (Lillet Rosé Aperitif, Soda, Brut Champagne, Lime) and I went for something far different from my usual and tried the Blood and Sand (Bruichladdich Classic Laddie Scotch, Cherry Heering Liqueur, Sweet Vermouth, Orange) and we liked them both, but liked mine better.

For an appetizer, we had both the deviled eggs and the burrata. These drew a split verdict. While we agreed that each were very good, I could eat my weight in the deviled eggs, which are topped with Benton’s bacon jam and sumac, while she felt the same way about the burrata (served with arugula salad, baby heirloom tomatoes, charred shallots, basil vinaigrette, and balsamic reduction) and ate most of that. 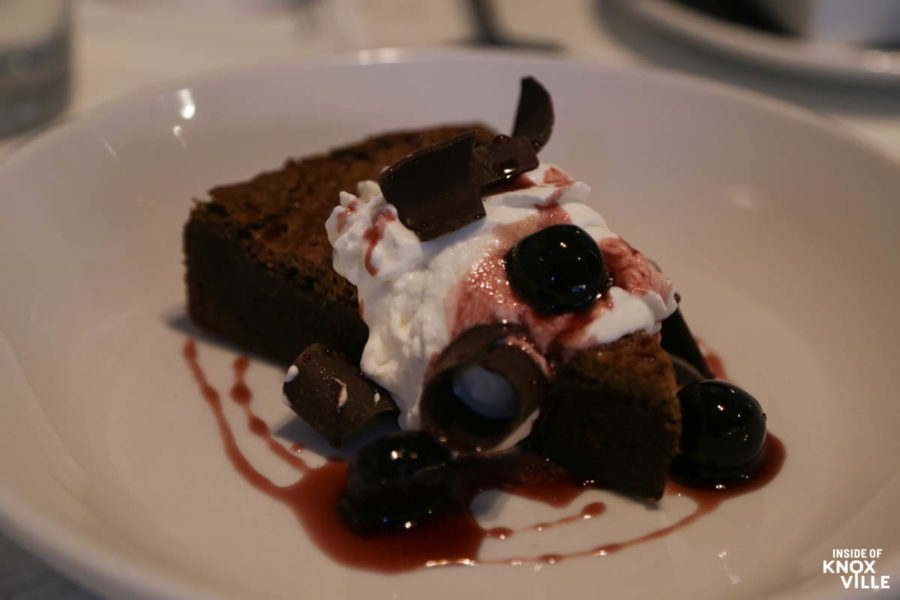 Chocolate Tort, Harvest, 141 South Gay Street, Knoxville, September 2022For her main dish, she got the Blackened Jumbo Shrimp, while I went with the drunken noodles with shaved prime rib. Both dishes were good and though we cross-tasted, it was hard to make a call. The meat in both dishes were excellent and the grit cake was other-worldly. I accompanied mine with a delicious glass of Pied de Argent, Côtes-du-Bordeaux.

We ended the meal with a (split) chocolate tort (one of our favorite desserts) and she had a cup of coffee, which she said was good.

Currently the restaurant is open for dinner hours until 9:00 pm. They will open for lunch, soon and will remain open until 11:00 pm early in the week and until midnight on the weekends and nine on Sundays. Brunch is from 10:00 am to 3:00 pm and lunch will be from 11:00 am to 3:00 pm. Live Jazz will be featured on Wednesday and Thursday nights from 7:30 to 9:30 pm. Wednesday night will be instrumental and Thursday night will include vocal jazz.