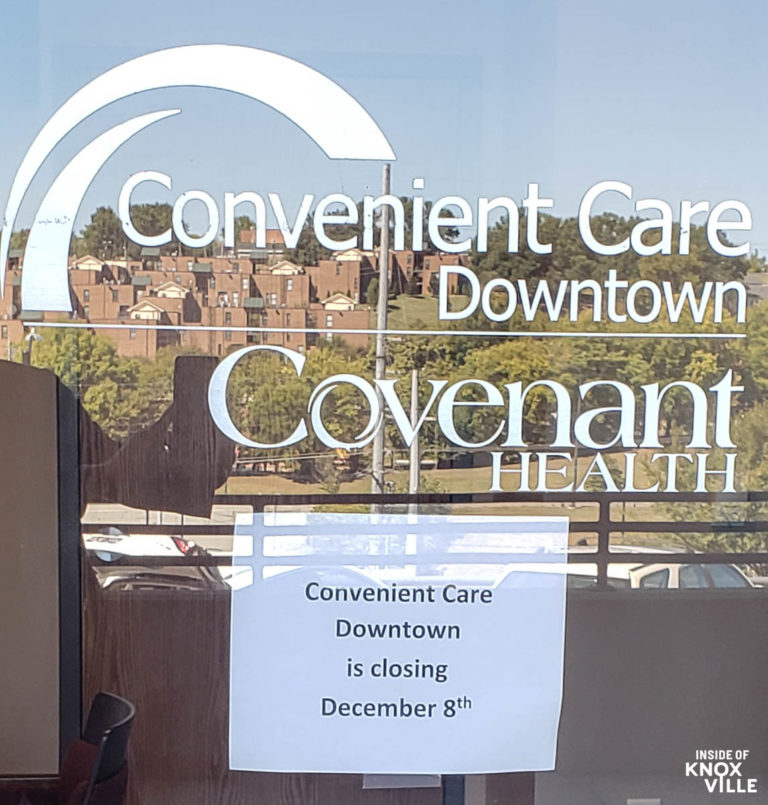 For me, it was one of the greatest one-two punches of good news I’ve ever reported: Downtown got an independent pharmacy in Phoenix Pharmacy and Fountain and downtown got a primary and urgent care clinic in Covenant Convenient Care. The pharmacy opened near the end of 2015 and the clinic opened in early 2016. Two critical services were added to the downtown resurgence, further allowing people to do their business without driving out of downtown.

Urban Woman and I have made great use of both through various physical challenges and urgent needs. We continue to use and love the care we get at Phoenix Pharmacy and hope they are here for many years to come. Tiffany, at Covenant Convenient Care was the first to suspect my brother’s cancer and referred him quickly and she also caught an emergency we didn’t know was happening when Urban Woman walked in for what she thought was a simple issue.

I’ve been able to confirm nothing beyond the simple fact that the clinic will be closing on December 8. Urgent care will continue until they close. As a primary care facility, they are contacting patients to inform them they will need to seek care elsewhere. The decision was made at the corporate level.

So, after over six years, downtown no longer has medical care beyond two dentists and a pharmacy. It feels like a setback that downtown was considered a good potential location in 2016, but is no longer seen that way in 2022. Without knowing the reasoning behind the decision, its possible the variables were on their end and not ours, but it seems likely if it was meeting or exceeding expectations it would remain open.

It underscores a couple of realities about the growth in downtown services.

First, we need more density. That may seem odd to anyone who has tried to walk the sidewalks on a weekend or tried to get a dinner reservation. It may seem odd to people who have seen the explosion in downtown dwellings over the last decade. But it is true. Many services and retail require a high volume to survive. Weekend visitors from outside the downtown area don’t use urgent care downtown. That requires a lot of people who sporadically might have a small medical need.

The density we have built is helpful, but it is mostly on a small scale. Many downtown residential developments have twenty or thirty units. That’s better than none, but it is quite different than a dozen or twenty story building filled with condos or apartments like you would find commonly in larger cities. Some of the buildings may seem big to pedestrians and visitors, but they really don’t have that many units. My home, for example, is in Gallery Lofts over Mast General. It looks large, but only contains fourteen units.

Additionally, many of the units are empty at any given time. My floor in Gallery lofts as an example, has seven units. It is not uncommon for only two to be occupied. For many people who have purchased a downtown condo, it serves as a pied a terre. It’s a fun place to drop in on a weekend for a football game, but otherwise it sits empty. This is increasingly common downtown and reduces density, therefore reducing people in shops, restaurants, bars — and urgent care centers.

The second reality is that it is critical that everyone who rents or owns downtown support all the services offered. I know we continued to use services like our dentist in west Knox County and so on, well past when we moved. It’s hard to change patterns. But it is a simple reality that if services or businesses aren’t supported, they will leave. I need to re-examine my own habits to see if there are more ways I can spend my dollars downtown.

So what happens next? I don’t know. I would love to think a company, local or national, or maybe a local physician might see an opportunity to provide the service we’ve lost. The hurdle is convincing any such company that it would work for them whereas it didn’t for Covenant. I’m hopeful, but in the meantime, the one thing that we know that will produce more services is more bodies. We need more people downtown as quickly as we can get them.