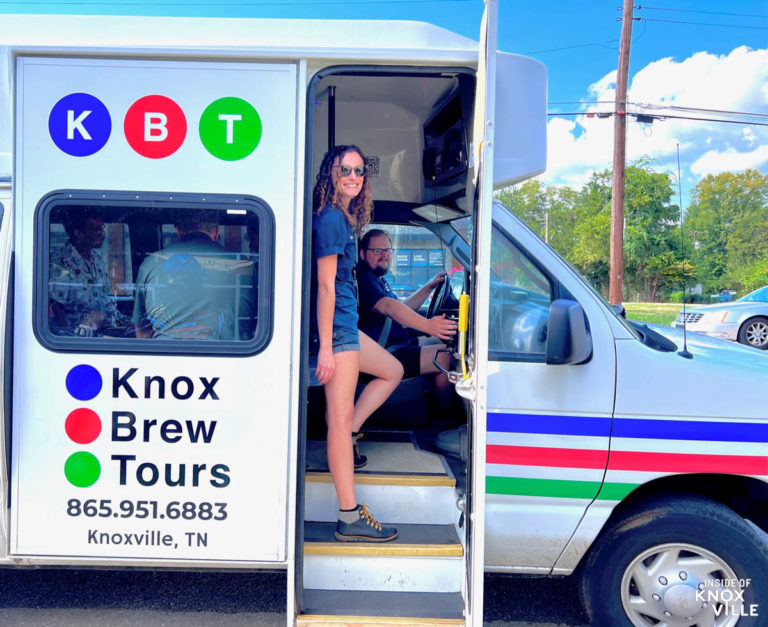 (Article and photos by Heather Ryerson)

You wouldn’t think simply sitting across from Zack Roskop, owner of Knox Brew Tours and Knox Brew Hub, on a Monday morning at Panera Bread would leave this non-beer drinker excited to hop on a bus and get to sampling some of the amazing craft beer that Knoxville has to offer. Yet, that’s just what it did.

Zack’s passion is the culture and community that surrounds beer and breaking down barriers to beer. He believes craft beer can add to the quality of life and he wants to share that passion with others. It rubbed off on me so much so that last weekend we celebrated my husband’s birthday on a brew bus with Knox Brew Tours  along with a few friends and a few strangers who became friends!

While on the tour, we visited 4 breweries, sampled 10 beers all made here in Knoxville and got to explore the process of beer making with the experts who are doing it. We did this from the safety of the Knox Brew Tours bus with Fuzzy, our fearless driver and Ace, our knowledgeable guide.

It was a delightful evening that flew by as we enjoyed the cooler temperatures and the unique atmosphere each brewery offered. With around 28 breweries in Knoxville today, 19 of those are partnered with Knox Brew Tours to offer samples and some behind the scenes info on how they create their craft brews. Each one has its own personality to offer. The hardest part of an evening is deciding which one you are in the mood for.

I asked Zack, whose brew bus business has been in operation since 2014, to describe his motivation for creating new ventures. He said he has, “a love of Knoxville, a love of craft beer and a love of people.” This philosophy resulted in the opening of his bar, Knox Brew Hub, yet another Covid business success story. With 512 days that they could not do tours, Zack and his team were able to dream, plan and do some creative celebrations. My favorite story might have been Knox Brew Tours doing a drive by celebration for a husband who put on pants for the first time during the pandemic!

Knox Brew Hub opened its doors in the fall of 2020. It replaced Casual Pint’s downtown location and with the addition of food offerings, the Hub has become a destination for many craft beer lovers. Zack says he wants the Hub to be a “visitor center for beer. Not your only stop, but your first stop!”

The transportation theme in the bar was purposeful. Zack wants to support the community he is so passionate about by sending you out in the direction of your next craft beer experience. He even compares the community with the church community for some. The spirit of support and camaraderie are strong.

The company is now offering keg rental or leasing and maintenance services for parties, offices and anywhere else one could want the draft beer experience without the hassle of maintaining the equipment yourself. Several employers are already taking advantage of this leasing service to make their businesses more attractive to employees in the area.

The first brew bus Zack purchased is still in operation. However, in October, she will be retiring. The bus is lovingly named “Kathy” after Zack’s aunt who passed away just before he opened the brew tours. Kathy will be sent off with a retirement party. She will then be recommissioned as the Knox Brew Hub’s next venture, a never-before discussed Tap Truck, bringing you your favorite craft beer on site with a unique way to dispense the beverages.

They are excited to get into the world of special events and want to be part of the nontraditional wedding scene that many Millennials and GenZ’s are gravitating toward. With his own wedding in sight, also in October, Zack and his fiancé Amy, are keenly aware of all that goes into the process. With that experience, he is sure they can offer a superior product to customers as this plan moves forward.

As we wrapped things up, I asked Zack one of my favorite questions to ask entrepreneurs, especially those who have thrived through the pandemic. “What have you learned?” As I am seeing with so many who are successful in business, they recognize the strength in the company they keep. Zack made sure to recognize his amazing staff and told me, “You’re only as strong as the people around you and those you pour into.”

Even though I did not come away craving craft beer any more than I did before the tour, my appreciation for the process and the people grew exponentially. When you have a chance to check them out, I highly recommend a tour. If that’s not your thing, stop by Knox Brew Hub for Emo Music Night, Music Bingo or Chess Club!

To stay updated on the craft brew scene in Knoxville, tune into the weekly live radio show, Knox Brew Stories at 6pm om Mondays and check out their blog every Tuesday.