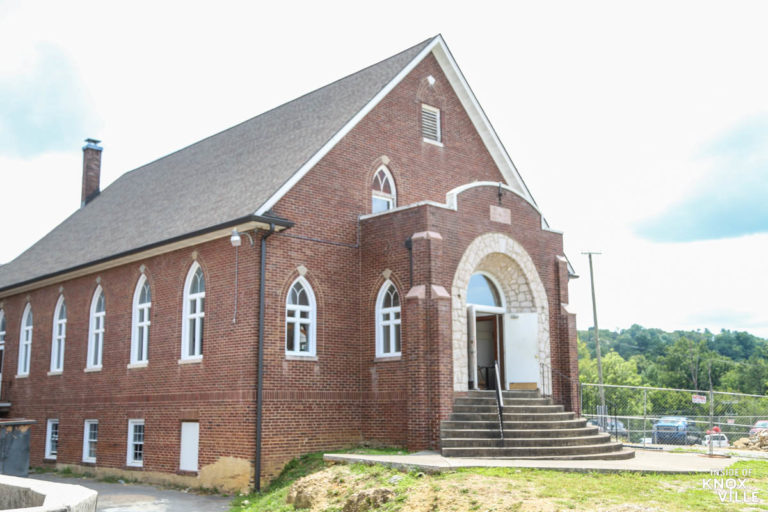 A new development group has purchased a portion of Baker Creek Bottoms. Tom Weiss, Michael Wood sold the chapel and classroom building to Jay Benson, Tim Duff, Jason Stouffer, and Chris Spiller. Thomas Krajewski joined the group from the previous group. The other buildings on the site have different ownership groups. 71 South is the official designation for the James White Parkway, which leads directly into Tilson at the Urban Wilderness entrance and then terminates just outside the new business.

The restaurant will feature New American cuisine and atmosphere will be casual (come off the trails, come inside) but located in the beautiful original, nearly 100-year-old original sanctuary of Sevier Heights Baptist Church. The building sat empty in recent years and had taken quite a bit of abuse, with holes in the wall, broken windows, and graffiti on the walls. The pulpit was damaged.

An ownership group including Ryan Steffy, Chef Matt Petro (who developed the menu), Kitchen Manager Andy Crockett and General Manager, Zack Bowlby will open the restaurant which is currently undergoing renovation as they put in large amounts of sweat equity. Ryan has worked his way up through front of house positions in Knoxville restaurants from “security guard to server to bartender and general manager.” Matt took her a similar path in the back of house, eventually becoming a chef.

Carpet has been removed from the floors, a bar is being erected where the altar once stood, and windows have been replaced, though the beautiful arched frames remain and have been adopted as a theme for the restaurant which is echoed in their branding (developed by Adam Atchley) and will be repeated with the architectural elements behind the bar.

Ryan pointed out the beautiful natural light that filters through the new windows, along with the views of the Baker Creek Preserve cycling park just outside the window. Initial plans include seating for about 96 inside the 3500 square foot space (which includes the kitchen), with eventual plans to place private, all-weather patio seating outside. In the interim, there will be outdoor seating shared with the other eventual tenants in a courtyard to one side of the restaurant.

The old pulpit has been restored and preserved and will serve as the host stand, greeting diners when they walk through the door. “The church is so beautiful . . . the architecture speaks for itself and when you walk in you get this whole visual.” Some pews have been preserved to provide seating in the center of the restaurant, facing out over two-top tables with chairs on the opposing side.

The structure behind the pews, used for separation, was constructed from wood salvaged from the building. Four top tables will line the outer walls and fill the space in between. Endcaps on the center section will add to privacy and will echo the arch design. Three sections of latticework grace the top of the room and serve to soften the lighting.

Ryan said they’ve done a lot of their own work, building the tables, and upholstering the pews to reduce costs. Interior design work has been done by Shanthi Appelö. He said being in south Knoxville has been a great experience and they were glad to be able to work with locals like Shanthi and Adam are both from the area. “You can see the pride they had in developing the design and the brand. This is a place that is in their neighborhood, and I think that came through.” They are using Benefield Richters Architects.

The bar will be in the front where the altar would have been, with the arched design retained for what would have been the elevation for the pulpit. Three arches behind the bar will contain the liquor. They will have a wall of taps for craft beer with as much local as possible. A kegerator serving cocktails mixed inhouse will flow throw another set of taps.

The restaurant will be full service and will operate seven days a week roughly 11:00 am to 11:00 pm. “We will have a lunch/breakfast special that runs until about 3:00 pm.” Weekends will include an extended brunch menu. The dinner menu will be seasonal and will include a blend of comfort foods with some healthier fare. He said it was important to them to include healthier entrees for those who want them.

They also plan to work in partnership, through special events or specials, as well as rounding-up, to support Legacy Parks. “We want to maintain and help the area we are in, as much as we can.” They are hoping for an October opening.