The Bark: Open and Growing Rapidly 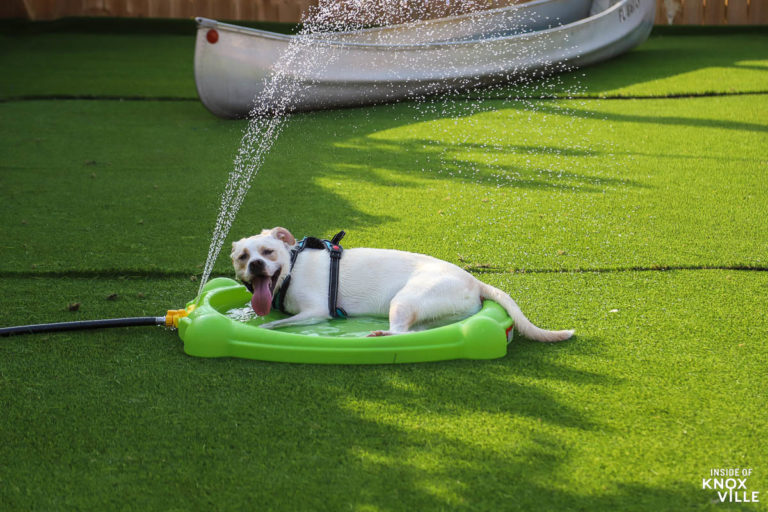 In early March I reported plans to open a dog park and daycare at 601 Lamar Street. The Bark opened May 14 and has seen business steadily grow during the last two months. I met with Leslie Myers, Director of Parks and Barks, and owner Hanna Harris to see how the launch has gone.

The two said it was slow the first week or so and then began to take off. It took some time to schedule and complete behavior checks on the dogs, something they require before dogs are allowed to be on premise mixing with other dogs and humans. Before use, owners must also provide shot records and other information. So far, they have completed behavior screenings for about 600 dogs.

The business also offers a line of dog products with a focus on “dog enrichment.” Hannah said their products are not typically available at your average pet store. The toys are designed to “give them mental enrichment.”

The indoor facilities and the outdoor facilities are both appealing, but one surprise has been that despite sometimes high temperatures, owners and dogs prefer the outdoors. While the indoors is used for cool-off periods and they expect it to get heavy use this winter, even in the heat, most folks and pups pick outdoors.

The $50 per month unlimited use is a popular option. Sometimes owners and dogs come to check it out a couple of times and then buy in to become regulars. The two said a number of people have their dogs in the daycare and when they get off work, they hang out there with their dog. A single day is typically $12 for a dog, but there is a happy hour on Monday with $6 admission.

Bark Rangers staff inside and outside, monitoring for any issues between dogs. The rangers have at least twenty hours of training before they work solo. The two said, thanks to the screening, there have been very few incidents. The type of owners they attract typically have trained their dogs and are vigilant themselves for any issues.

One of the surprises for me was the number of people who do not own dogs, but come to hang out there because they enjoy being around other people’s dogs, or just hanging out with friends in a fun environment. Admission for people without dogs is free. They come enjoy the dogs, buy dinner from the food truck, and enjoy beverages.

A food truck is often waiting outside and a wide range of adult beverages are available. While they didn’t plan to have food initially, it’s been quite popular, and the Across the Pond truck was serving when I visited. A Cider and Seltzer Tasting was underway, with Kirstin serving eight different ciders and seltzers. $12 got a sample of all eight. There are over 90 beverages currently offered, including local beers and “things you don’t usually see . . . including craft beverages you may never have heard of.”

The dog day care offered Monday through Friday has been growing every day. They also offer luxury boarding with private boarding (including toddler beds for the dogs). They also offer dog training. Some people feel more confident after going through the training with their dog to let their dog run around the park with the other dogs.

Leslie said, “It has been a really cool community. It’s a lot of like-minded people who really care about their dogs and want them to have a good time.” Hanna added that the staff (which now numbers about 18 and is growing) is also a great group. They said it is important to them that the staff knows they care.