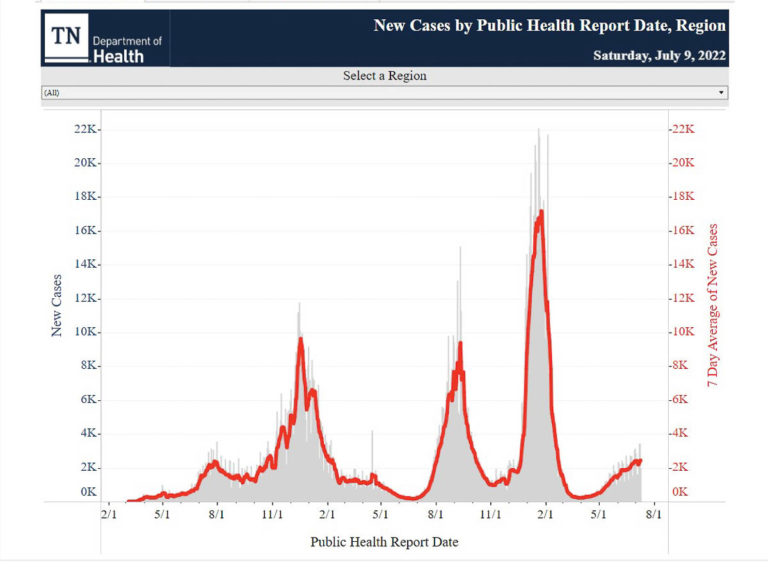 It was just over four months ago that I gave the most recent COVID-19 update. While I’m not picking up regular COVID updates again, it seemed a good moment to bring up the topic once more. COVID-19 numbers have risen significantly in the last couple of months in the state and county. We don’t really know how much they’ve risen because home tests are the testing source du jour and very few of those are reported. We can see trends, however, and the trends are clear.

While we understand far more about the illness and we’re no longer inclined to stay home, we need to understand current risks to make good choices. While those of us up-to-date on our shots are unlikely to be hospitalized or die from the illness, it’s still a good thing to avoid. It means time off work, canceled trips, and not feeling great, along with some risk of something worse. This might be a good time to wear a mask in crowds and stay outside as much as possible.

When I wrote that last article in March, COVID-19 numbers were plummeting. They continued to fall through late March in the state and into early April in Knox County. There were days in early April when no additional COVID-19 cases were officially reported.

At that time I came up with levels for numerous categories which would dictate whether I would resume regular updates. Because of the vast reduction in timely information, as well as the advent of at-home testing, regular updates really don’t make sense. Still, if we approach those levels given the partial information we have about new cases, that is striking. And that is what we’ve done. Let’s look at the situation from every level.

While we haven’t attained my hoped-for goal of below 500,000 cases per day (we came close in May), we are between that and the March levels at just over 914,000 known new cases per day. The places with the highest current rates include the U.S., Europe, Australia, and the central portion of South America.

Deaths have declined precipitously from March, having hit a low last month. At just over 1,500 per day, this is the success story of the vaccinations. People are still getting sick, but not as many are dying, likely a tip of the hat to vaccines. Almost 63% of the global population is fully vaccinated (two doses, not necessarily boosted).

At the national level, I’m looking for less than 75,000 new cases per day and fewer than 1,200 deaths per day. At my last report, cases had fallen well below the desired level, but deaths remained above that level. Those numbers are now reversed.

While the U.S. had led the world in daily cases for most of the pandemic, by the time of my last report it had dropped below several other countries. It is now back on top in total daily numbers of reported cases. In March the U.S. was averaging under 39,000 cases per day. That number has now risen (without home testing data) to just under 130,000 new cases per day and is up 15% in the last two weeks. The true number is likely much, much higher.

The good news is that deaths remain low so far. Almost 1,500 U.S. residents were dying each day from COVID-19 in March, and now that number is 425 per day, though it is up by 10% over the last two weeks. At my last report COVID-19 hospitalizations numbered just over 35,000 and had fallen 43% over the previous two weeks. Now they are at about 41,000 and have risen 20% in the last two weeks.

67% of U.S. residents are fully vaccinated, meaning they had two rounds, not that they are boosted.

At the state level, I’m looking at three metrics. I’d like to see cases below 1,200 per day, deaths below 40 per day and COVID-19 hospitalizations below 1,000. When last we tuned in, we had hit two of the three and they were all dropping rapidly.

At that last report, the state was averaging 973 new cases per day and that number had dropped almost 42% from the previous week. That number continued to drop and fell to close to 200 per day by the end of that month. The state is currently averaging over 2,400 cases per day (despite not counting home tests) with a 26% increase over the last two weeks.

Whether that low death rate will be maintained is questionable given current hospitalization statistics. At the time of my last report only 147 COVID-positive patients were hospitalized in the state. That number began to slowly climb in May and has continued to climb. There are currently 701 COVID-positive patients in hospitals across the state and that number has increased 27% in the last two weeks.

The state’s positivity rate is about 28%, while the goal to feel most cases are being found, is 5%.

At the time of my last report, new confirmed cases were averaging 37 per day and had fallen over 47% from just the previous week. At last week’s report, reported cases in Knox County averaged 95 per day and had hovered around 100 for the last three weeks. There have been over 103,000 confirmed cases and over 32,000 probable cases.

When last I reported, there were 165 COVID-positive patients in area hospitals and that number had fallen 33% in the last week. The number fell dramatically to less than 20 by mid-April and around 20 for several weeks afterward. The number began to rise in May and sits at 97 as of the last report (through 7/9), an increase of 59% from the week before. It’s the largest number since March 12. Of thse, twelve people are in ICUs and four are on ventilators.

Deaths reported over the last week numbered 5. 128 Knox County residents have died of the virus since my last report, bringing the total to 1,421. Recent deaths, as they were early in the pandemic, have concentrated on the older residents. Just over half (721) of deaths from the virus in the county have been among those 75+.