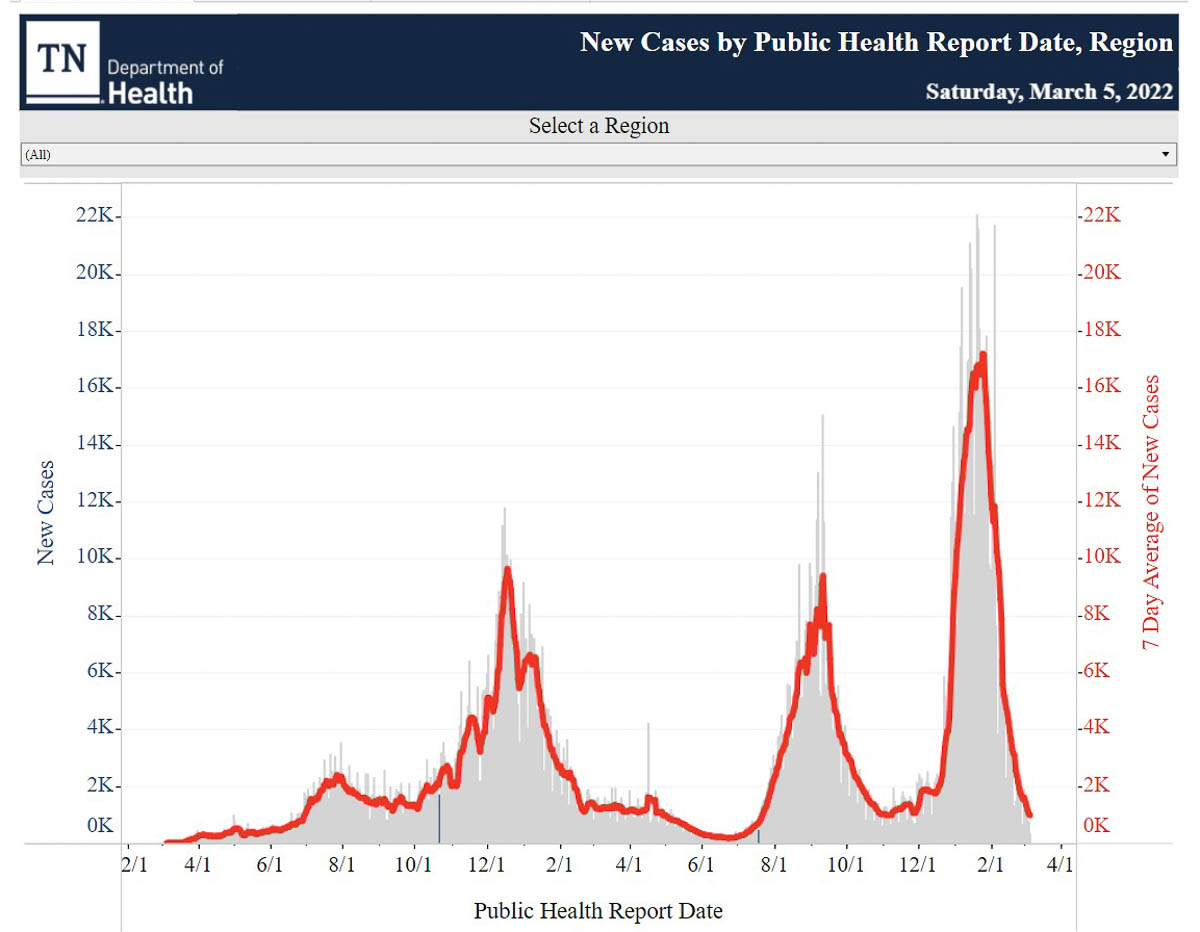 After looking at the range of metrics I mentioned last week, I feel the time has come to end my regular Thursday reports, though I may update the monthly numbers. While we are hitting .500 on the metrics at the national an international levels, five of the seven state and local metrics have been met and, in some cases, far exceeded. They are also moving rapidly in the right direction and I think, given the delay in reporting, we may have already reached all seven markers.

So, what does this mean? Are we all good, ready to declare the end of the pandemic? No. With somewhere around 7,500 Americans dying last week and the virus likely heading toward being the third leading cause of death in the U.S. for the third consecutive year, the nightmare hasn’t ended.

Does it mean we’ve seen the last large surge of cases and deaths? No one knows, but I’ll be honest, I was much more hopeful of that a month ago than I am now. For reasons to be pessimistic, look no further than some of the European countries (U.K., Netherlands, Switzerland) currently experiencing a fresh surge. Each of these three countries has vaccination rates far above our own and they’ve just weeks ago experienced an Omicron surge similar to ours. And yet, here they go again.

So, it’s not the end of the pandemic and we’ll likely have another surge. So why quit reporting? Because we have a moment or longer of greatly improved numbers. Mostly because at this moment, COVID-19 isn’t the dominant variable in our lives, our businesses, and our city. I’m going to cram as much music, dining, and travel in as I can during this lull. It may not last, but as Janis said, “Get it while you can.”

Should things change, I’ll consider starting up again. In the meantime, I’m going to hope that never happens and we’ve made it through, even though I’m not convinced. I hope everyone has a joyous spring and summer at the least. I know I’m going to do my best. And I’ve got lots of great downtown news coming your way in short order.

At the international level, I’m looking for us to drop below 500,000 cases per day and 7,500 deaths per day. We aren’t very close in cases, which increased slightly this week, but the rate of daily deaths continues to decline and is now below that mark.

The current rate is about 82% above the peaks of any of the previous surges, the worst of which topped out at about 828,000 new cases per day. The 59.6 million active cases globally reflect a decline from the pandemic record of 74.6 million set about a month ago. There have been about 450.5 million confirmed cases since the beginning of the pandemic.

Deaths continued to drop week, with a 17% decrease, the same as last week. For the seven days just ended, 47.5 thousand deaths were reported, for an average of 6,789 deaths per day. Just over 6 million people have died of COVID-19 since the beginning of the pandemic.

At the national level, I’m looking for less than 75,000 new cases per day and fewer than 1,200 deaths per day. We’ve fallen far below the case-per-day threshold but aren’t quite there on deaths. Given what we know about deaths trends trailing case trends, that goal should be reached very soon — perhaps in the next week.

As it has from very early in the pandemic, the U.S. leads the world in cases with about 81 million and in total deaths with over 988,000.

For the fourth consecutive week, however, the United States is not leading in new cases. Over the last week, the U.S. has averaged 38,652 new cases per day, fewer than twelve other countries over the same period. New cases in the U.S. have dropped 51% over the last two weeks, and about 36% in just the past week. There are currently about 24.8 million active cases in the U.S., down about 1.2 million from last week and from the pandemic record of 29 million active cases set just over a month ago.

While rates aren’t changing much, vaccinations do continue to be given in the U.S., with an average of 322,000 per day given in the last week (down by over 120,000 from last week). Most of these are booster shots. Almost 60% of people over age 65 have gotten a booster, while percentages are much lower for all other age groups, including just 29% of adults under the age of 65.

At the state level, I’m looking at three metrics. I’d like to see cases below 1,200 per day, deaths below 40 per day and COVID-19 hospitalizations below 1,000. Last week we missed on all three, but this week, we hit two of the three and are getting closer on the third.

The dramatic decline in new cases continues. The current report (which only includes data through 3/5) reveals a 41.6% drop from just one week prior. This follows similar drops in recent weeks and results in a current average of 973 new cases per day in Tennessee in the period covered. The worst single day in the period was 1,891 on 2/28, early in the period. As recently as 2/3 a daily new case total of nearly 22,000 was reported.

The state has confirmed over 2 million cases and 24,712 deaths from the illness. The state remains fourth in most per capita cases in the U.S. but dropped two spaces to claim the seventh worst COVID-19 death rate in the country.

According to the new state data published yesterday, an average of 33 Tennesseans died each day from COVID-19 last week, down from 72 per day the week before. Hospitalizations decreased by a net of 56 each day last week.  About 10,000 tests per day were reported last week, down about 3% from the previous week. The average positivity rate for the week was 6.81%, down from 11.48% the previous week. The goal is 5%.

About 26,200 vaccinations were given over the last week, down from 30,800 the week before. Tennessee’s 52.8% vaccination rate again earned 44th best out of the 50 states this week.

At the local level, I’m following four metrics. I’d like to see cases below 100 per day, deaths below one a day, hospitalizations below 250, and active cases below 1,000. The great news is that we hit the mark this week on three of the four, and we may hit the other by next week.

Over the seven days included in this data, the KCHD reported 256 confirmed new cases, for a daily average of 37 per day, down 47.3% from the week before, which makes five consecutive weeks of 40% or greater drops each week. About five weeks ago we were averaging an astounding 950+ cases per day. We’ve had fewer than 100 confirmed cases for fifteen consecutive days. The last time that happened was in November.

Probable cases, which likely includes the portion of the home tests which are reported, also continue to fall rapidly. After averaging over 300 a day just over a month ago, this reporting period revealed 20 per day, for a 93% drop over that short period

After setting a pandemic record just six weeks ago, with 14,630 active cases, those numbers also continue to plummet. Active case numbers dropped over 50% since just last week and now sit at 718. This is the lowest number of active cases reported in Knox County since November 16 (695).

UT Hospital reports 39 COVID-positive patients (down 35% from 60 the week before), with 90% unvaccinated and an average ICU age of 71. Covenant Hospitals announced this week that their numbers are sufficiently low they have ceased reporting daily numbers.

Deaths remain elevated, though those reported for this period are below each of the two periods and they should continue to drop. While the KCHD added 23 deaths to the total COVID-19 deaths this week, only nine of those occurred in the most recent seven-day period. Two were added to last September, four were added to January, and thirteen were added to February, and four to March. Of those 23 deaths, four deaths were people between the ages of 18-44, seven were 45-64, three were age 65-74, and nine were 75 or older.

Numbers at UTK and KCS are extremely low. UTK is reporting just 10 active cases, up from 7 a week ago. The Knox County Schools are currently reporting 9 known cases, down from 18 reported one week earlier. If each of these numbers is anywhere near correct, COVID-19 is virtually gone from the two largest institutions in the county.