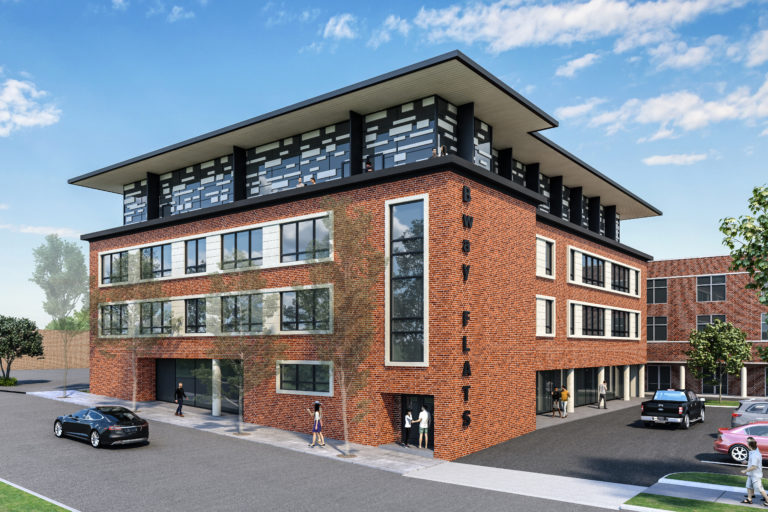 Rending of Proposed Changes to the Pollard Building

At the corner of Bearden Place and Irwin, just off Broadway across from the coming location of Yee Haw Brewing (formerly Elkmont Brewing), Buzz Goss is under contract for the former educational and office building owned by Broadway Baptist Church. With a declining congregation in recent years, the 1955 building was needed less and was offered for sale. Once renovated, the building will represent about a $10,000,000 investment.

The top floor would have an inset to allow for balconies around the rim of what is now the roof. The total square footage should be around 42,000 square feet when finished. The top floor will offer great views of the downtown skyline.

David Shiflett of Parker Shiflett and Company brokered the deal. They hired Michael Brady Architects to do an engineering study. Michael suggested that David reach out to Buzz to see if he would be interested in the building and Buzz agreed to buy it before it officially went on the market after a forty-five-minute walk around the building. After various congregational conversations, a contract was signed on December 2.

The building is currently recorded as a portion of the same parcel the church sits on, so it has to be separated out. Buzz hopes once that is done, they’ll be able to close by the end of April. He’s already underway with architectural work since he knows the deal will eventually close.

He’s expecting around fifty units on the top three floors. The bottom floor will become commercial, and the use of the space has yet to be determined, though Buzz is working with a couple of ideas. He hopes to have some news on that front soon.

Of the residential units, Buzz said, “The way the building is laid out is really easily converted to residential units. They will be typical loft kind of units with windows in the front and bedrooms in the back. They will be mostly ones, with some two-bedrooms.” The bands of windows around the building will stay, giving great sunlight to each space. The interior transom windows will be preserved, giving light to interior portions of the apartments.

The building has solid concrete floors, so sound impact between floors should be minimum. Additionally, the walls are “four-inch CMU.” He’ll drywall them, but the interior concrete blocks will help mitigate sound between units. It will be the first large residential project in the area, and he feels it may be an impetus to further development in the area.

He said the units will likely be some of the more expensive apartments in the area, but he feels the market is ready for it. The building has been named the Pollard Building, after Ramsey and Della Pollard, since its construction, and he plans to incorporate that history in some way into the naming of the renovated building. He expects construction to start in the fall and plans to have several projects running at once, with completion about fourteen months later.