Kopita Expanding, Moving to Larger Space in the Embassy Suites 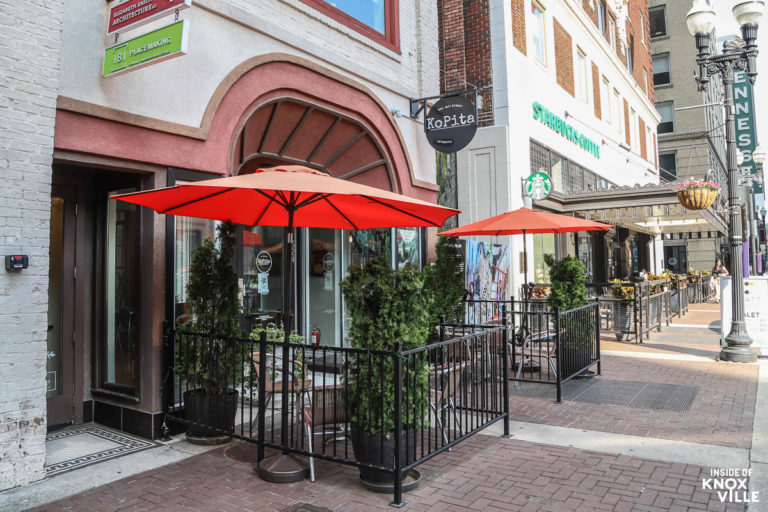 The wait to see which restaurant would move into the space soon to be vacated by Knox Mason at Embassy Suites was not a long one. Avi Zenatti and spouse Ilana Brodt will move Kopita just down and across the street into the new space, with plans to open in mid-July.

Avi said the couple decided several months back they wanted to expand Kopita in its current space, including a larger kitchen and a rearrangement of the restaurant. They took all the steps necessary with an architect and city permitting and got estimates for the work. The estimates were high, which gave him pause.

He and Ilana are friends with Alpesh Patel’s (owner of Embassy Suites) family, who often eat at Kopita. Avi said the two of them have spoken for a long time about doing something interesting together that would add something different to downtown. When Alpesh told Avi that Knox Mason would be leaving their restaurant space in Embassy Suites and asked if Avi was interested.

It made sense, as opposed to adding more money to the current Kopita location, to assume a place that already had the larger space and kitchen that he’d wanted. He said they talked, and, for him, the issue isn’t making money from the restaurant for himself, but to make enough to cover expenses and pay his workers well. “My major thing is to provide a place to work for people in Knoxville and to provide a good salary with health insurance and benefits.”

His plan includes expanding his Mediterranean offerings to include tastes from other Mediterranean countries such as Greece and Morocco. He also plans to integrate some Indian spices into the foods he prepares. The original menu items will remain, but both vegan and meat offerings will be expanded for the dinner service. Lunch service will offer the same menu as that currently available at Kopita.

Ilana said the couple wants to provide healthy food for the city and fresh food is important. She said while it costs more, it fits their vision of what they want to do. She said, “We always had people eat at our table. When we opened the restaurant, it became our kitchen outside, our extension of our home.”

Catering will also continue to be an emphasis, though now with a larger kitchen. Ilana said that catering has been very successful and has become an increasingly large part of the business. Avi said Regal and UT have become a significant part of their catering business, often catering to 50 to 150 people. Ilana said many professors come to Kopita for the freshness and healthiness of the food and that has made the connections that led to catering.

The restaurant will also be offering room service in the hotel, a service that has not previously been offered at the hotel. That service, the couple said, will begin a couple of months after opening.

For the dinner service, white tablecloths will be added, and the menu will expand to more “upscale dishes.” He said there will be food from Spain, Tunisia, the south of France, and more. In many cases the dishes presented may blend the traditional foods from the cultures. Moroccan dishes will be served in a table-sized tagine. He plans to use spice that overlap in use between India and the Mediterranean to produce thali dishes.

Dinner will feature fresh fish every day, cooked in a Moroccan style. He will likely have steak, but not cuts commonly found elsewhere locally, like perhaps, he said, “a Denver cut.” Meats will be served on skewers with fresh salad and vegetables. There will be a range of kabobs offered. He’ll also have a special goose dish with small pieces of goose liver that Ilana says is to die for. He’ll also offer seasonal dishes as the vegetables are available.

Regarding the vegan guests, the couple said 80% or more of the menu will remain vegan. Additionally, he pointed out that he goes to pains in the kitchen to keep the foods separated. Knives, pans and oils used for preparation of meat are not used for preparation or cooking of vegan foods, for example. Kitchen cleanliness as a whole is critical to Avi, who will spend the time leading up to the opening making sure it is clean to his specifications. He said he sees it as honoring his guests. “Good food and quality foods begin with a clean kitchen.”

For desserts, he said there will be one that is cheese based. Another he hopes to provide is a collaboration with Nolan Sherrill, owner of Phoenix Pharmacy and Fountain. The milk-based dish, Mehalabiya (there are other spellings), originated in Turkey, but is found in other parts of the Middle East. There may also be ice-cream from the same kitchen.

He will bring his entire team of nine employees, who they were able to keep together during the pandemic, with him to the new space and will look to expand to about twenty-five. To that end, they are currently hiring all positions, including back-of-house, front-of-house for the restaurant and bartenders for the bar. Ilana said they are looking for people who can work together as family and take pride in the restaurant. Avi said he pays more than the minimum and pays for health insurance. Anyone interested should contact Avi at (305)570-9050.

For the couple, he said their goal with the galleries and restaurant is not to make a profit, but to make enough to support the business and support the employees while providing a superior product. Their money comes from their real estate transactions, and they are happy to pursue their passions of art, for her, and food, for him, without the pressure of needing to make a living.

Avi said the two of them lived in Jupiter, Florida before moving to Knoxville. He said the home was beautiful, the water was beautiful, “but there was no interaction between the neighbors . . . Since we opened the restaurant and the gallery, we more friends. All our friends came from Kopita and the gallery.” He said one of those friends is Harrison Ford who has eaten there repeatedly and sometimes comes to Knoxville specifically to eat there. “Imagine the friends we will meet at the new restaurant!”

Expect them to be open by mid-July. The original location will remain open until they cross the street. He’s hoping not to have any down time. The new location will maintain the same décor other than the white tablecloths. Plans are underway for the current Kopita space, but that announcement isn’t ready just yet.

“This restaurant is going to be very unique. We are going to work very hard. We are very excited. Come and eat!”