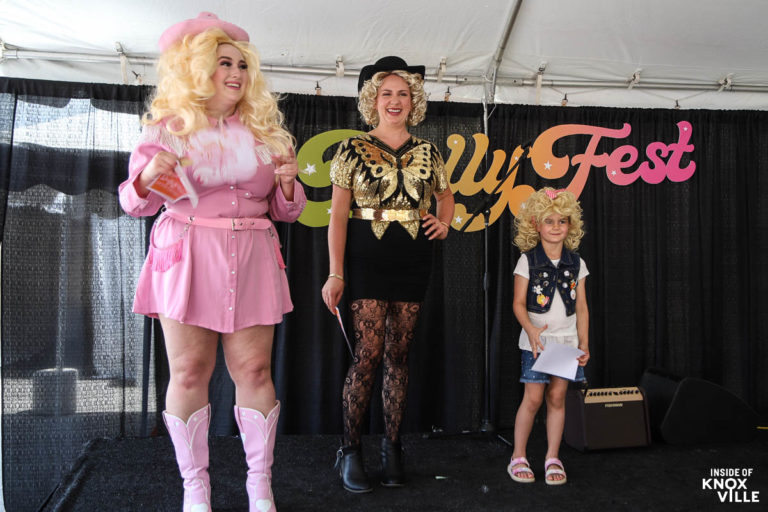 It seems to me that 2022 is really the year that Dolly Fest was able to take off. The crowds on Saturday, particularly, looked large (not individually, just as a group, though there was a lot of padding . . .) and happy. Hopefully word will spread and the event will be even more of a draw next year.

I was able to do a walk-through on Friday night (the Old City was crazy) and then spent a few hours on Saturday. My day, however, started down by the river at Bike, Boat, Brew, and Bark, where I had a great time walking around with the crew pictured above. We talked history, business, development and more for 2 1/2 hours. We had new Knoxville residents from New Jersey and some visiting with the thought of moving from northern Virginia, along with a good mix of local folks.

The thing that struck me most about Saturday is how the city has become big enough to have multiple massive, separate crowds, oblivious of each other and happily doing their own thing. We had a large crowd by the river, a massive crowd at the Market Square Farmers’ Market, and Dolly Fest had large crowds milling about the Old City. Meanwhile thousands were crowding the sidewalks on Gay Street probably oblivious of any of the above.

The party had already been hopping for a while when I arrived. I got there just in time to see the winners of the Dolly Parton look-alike contest announced. They looked great, but they were hardly the only ones. Milling about in the crowd were all manner of Dollies, from old to young, small and large, and everything in between. There was lots of pink, lots of rainbows, cowboy boots and hats and, of course, Dolly t-shirts. It is definitely a festival that inspires its own brand of couture.

After the Dolly winners were announced, I stepped inside several stores be-decked with Dollyness. Rala had a Wall of Dolly from their Dolly Art Contest that was sort of amazing to consider. Who else inspires that many people to do art? I also listened for a bit to Gary “Biscuit” Davis, Dolly’s banjo player and band-leader for the last twenty years. It was fascinating to listen to him play and watch people strolling by with no idea they were passing the world’s only five-time national banjo champion.

The music for the day was emceed by Bradley Reeves and curated by Hannah Houser and it was, naturally, excellent. I hated I missed Kelle Jolly, but I was able to catch Adeem the Artist live for the first time (first time for me, to be clear, it was not their first time live), though I’ve enjoyed streaming their Cast-Iron Pansexual album. The show was a big hit with the Dolly-infused Old City Crowd.

I took a break and enjoyed watching the crowds stream past Brother Wolf while I enjoyed a delicious Negroni. I was happily joined by friends Saul and Carolyn for a spell. After a great conversation, they moved along and left in their wake my memories of all the times I’ve set out to do something and friends (or sometimes strangers) present themselves and it’s just fine to put everything else on hold. That’s Knoxville: Hustle and large crowds, but friends and small moments.

I was able to catch part of headliner Leah Blevins set before I headed home to start writing about the weekend. She’s an up-and-coming singer who is currently working out of Nashville — a young, blonde woman with a great voice and a talent for songwriting. That sounds about right for the festival.

I’ll look forward to next year’s festival. Congratulations to the Old City with the growth and community they are experiencing.