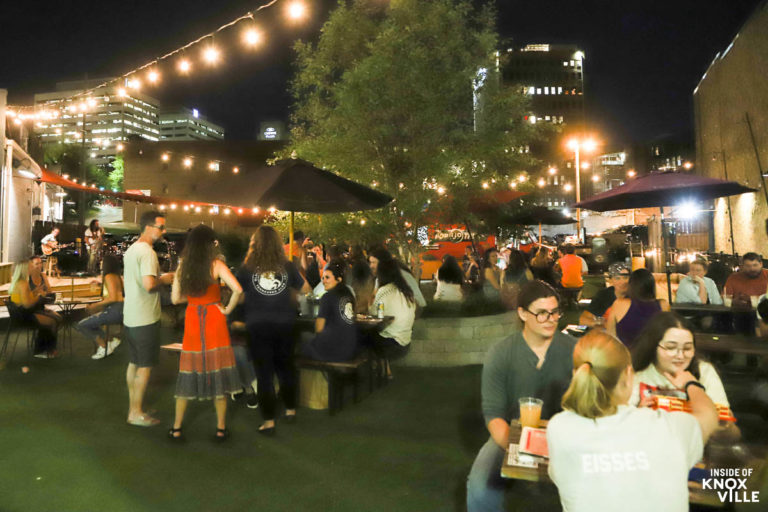 This is the first time I’ve really gotten into the flow of a First Friday in at least three years. When you live downtown, it’s kind of easy to leave it to the tourists and check out the galleries on a quiet weekday morning. This time, however, I decided to get back out and enjoy the great weather and art.

I started early, mostly to avoid large indoor crowds, walking to Emory Place at the north end of Gay Street. I saw a woman photographing a mannequin in the street, reminding me that one of the joys of being on the street is the experience of the unexpected. I didn’t ask questions as we acknowledged each other and I walked on.

Once in Emory Place, I checked in on the two fabulous new galleries there, Lilienthal and Pivot Point. Orel posed in front of her paintings at Lilienthal as a piano played soft music. Ilana served wine and kept the patrons happy. Next door at Pivot Point, I talked with Don and met Ash Baker who would provide music for the evening.

Still early, I walked back to the 100 block and enjoyed the art in the Emporium. Kara Lockmiller had some of her Dolly portraits there, as a tie-in with Dolly Fest which was starting up in the Old City and would run through the weekend. I particularly enjoyed the photography up for this month. I also met James Taylor, who was playing guitar and singing underneath the stairs. Turns out this James Taylor (not that other guy) does both visual art, his studio on that end of the Emporium, he also plays a fine guitar and sings.

Next door at the UT Downtown Gallery, this month’s exhibition is an extensive look at the life work of Eric Sublett. Eric is one of the semi-unknown heroes who did a lot behind the scenes to support the arts community and more. His father, Carl, was a well-known artist and UT professor, but Eric was also a prolific artist. In a beautiful example of the universe coming together, Carl also has an exhibition this month, his at Bennet Gallery. I hope to have more detail on this exhibition, which was pulled together by R.B. Morris, Gary Heatherly and others. Be sure to catch it.

I walked on down to the other end of Gay Street and checked in on the art at Marble City Dentistry before taking a break for some great Friday evening food from Kopita, enjoyed on our balcony as we watched the First Friday crowds grow. I slipped through the Old City to see the beginnings of Dolly Fest (more on that later), before ending the night at a celebration for a friend at Mill and Mine.

It was a lovely evening and a reminder that First Friday allows for everyone to choose their paths to a compelling night in the city. I do love the energy. It’s the one guaranteed night a month that downtown feels like the crowded streets of bigger city. I love that energy.