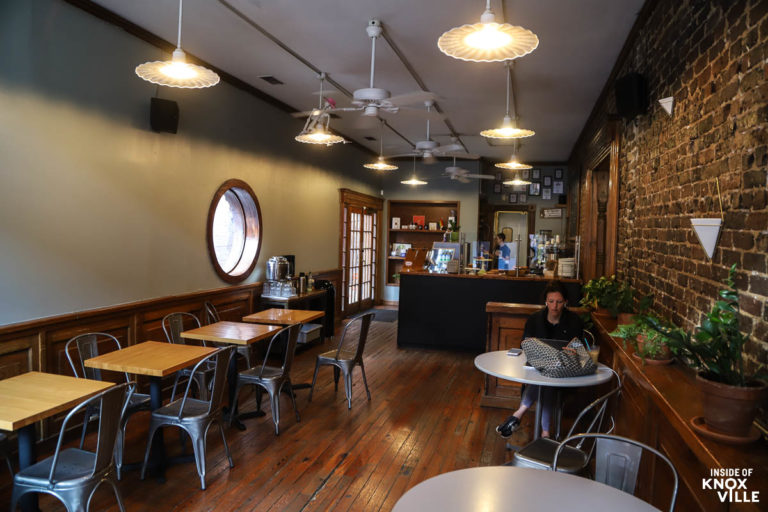 When last I checked in with either Shaun or Meg Parrish, owners of Wild Love Bake House and Old City Java, was November 2020. The two made the difficult decision to close their third location, Pearl on Union. We were still in the throes of some of the worst days of the pandemic, and their other locations were offering curbside pickup for coffee and pastries. While the dining area at Wild Love opened quite a while back, now, Old City Java continued service out the back door until March 17, which was “two years to the day” since they closed their doors. Now they are back to full, inside service and seating.

Opening the week before Big Ears 2022, the business went from admitting no one for two years to one of the biggest weekends of the year in less than one week. So much for time to ramp up. Shaun said it was “fantastic and a huge relief.” He said in 2020 January and February were very quiet, even unusually so, and a lot of hope was placed on Big Ears. Shaun said that when Big Ears was called off, “that’s when we knew things were serious and we were probably going to have to close.”

For the next weeks they changed practices to increase safety and minimize exposure, but they realized it was futile. Business was dropping daily and the decision to close was an obvious one. “The nature of food service is that this week’s sales pay last week’s bills. Once the train is moving, you have a rhythm . . . When that thing comes to a sudden stop, no one’s ready for that.”

Knowing someone who was looking to expand, Meg and Shaun decided to let their lease go on the Pearl location in favor of the new business. “It was a good way to provide some relief for ourselves. We could focus on just two, which seemed manageable for Meg and I.” After doing online ordering and curbside pick-up for a few months, the went to window service in late 2020. In September 2021 they reopened Wild Love and then in March opened Java to instore dining.

The couple used the down time in Old City Java to make a few minor improvements, such as the great new window seating they’ve added, along with addressing some long-term structural needs. The bathrooms have gotten a real facelift, for example, and the most expensive item (which is completely invisible, was the replacement of the old grease trap, which had gotten into poor condition. That required tearing up the kitchen floor. More changes are likely coming, like improvements to the façade.

The couple rents from Randy and Jenny Boyd and Shaun says they have been great landlords, pitching in with repairs and more. During the pandemic, they were very understanding with the difficult situation. “I think we are very fortunate . . . When they came in to look at the building they said, ‘We’d love to have you be here forever, if you want.”

Shaun said they waited for Omicron to die down before reopening and had their employees mask initially. “If someone gets sick, that’s it. You’re closing.” Of staffing, he said they had about 40 people working at the three locations. When they reopened the two locations, they brought back eight and that has now risen to about twenty. Wild Love is now closed on Monday and Tuesday and that has reduced some need for staffing.

Eventually, “Everyone was offered their jobs back, but not everyone wanted to return . . . Some had moved on . . . Our employee retention is high. All of our bakers worked for us pre-pandemic. We’ve seen a turnover in front-of-house.” Most of the turnover came at Old City Java, with only one of the seven workers was there before.

Since Big Ears, business has continued to be good. Shaun said there seems to be more people walking around downtown. He also pointed to the fact that there are more businesses open in the Old City than was the case before. It’s a fair point: Fin Two and Southern Grit had opened just before the pandemic. Kaizen moved down the street during the pandemic and Honeymouth opened beside it. A gift shop has opened across the street and more businesses are coming. People are moving into Stockyard Lofts.

He said the Old City has always felt a bit more bohemian and he hopes it retains its local feel. Other than weekend nights, he points out it is a neighborhood with larger numbers of both tourists and residents walking around. “We see a lot of tourists. A lot of the regulars are residents. We see a lot of UT faculty.”

He loves the fact that coffee shops bring people together from all walks of life, though he laments that more of them are now on screens and not interacting as much. He wondered if breaking the routine for so long would make for lost customers, but that wasn’t so much the case. “So many people made it a point to say how grateful they were. Business was back almost at once. It’s been great since. Almost all our old regulars are back, and we’ve seen new regulars.

I’m very grateful. There are a lot of options out there. This place has been here for thirty-one years this month. I’m grateful for everyone who comes to see us.”

Old City Java is currently opens at 7:00 am every morning except Saturday and Sunday, when they open at 8:00 am. They close at 7:00 pm each day.