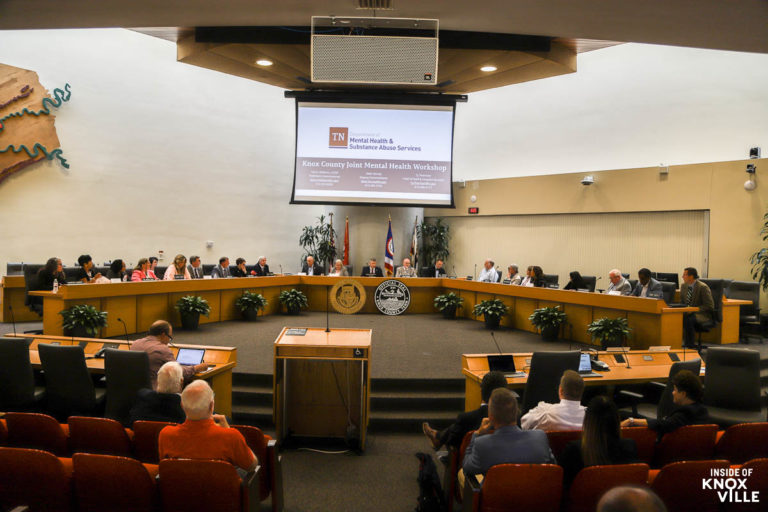 That there is a national, state, and local mental health crisis is a subject of wide-spread agreement. What produced the crisis, how to navigate the crisis, and how to get people the help they need is where the topic becomes more complicated. To shed further light on the topic of concern to so many, the Knox County Joint Mental Health workshop was convened in the City County building earlier this week. While a wealth of information was shared, little was offered in the way of a path forward offering any near-term hope.

Senator Massey began the meeting by noting the crisis is a national one and by expressing hope we might “take some bites out of the apple.”

Commissioner Williams spoke at length, noting the state has a $560.5 million mental health budget, but acknowledging we are “struggling because providers don’t have the money to pay for treatment.” She claimed there are 32,870 people in Knox County with serious mental illness and that about 30,000 of those have private insurance. The largest local gap in services, she said, comes in the area of substance abuse, where 30,700 people in the county struggle and a larger percentage have no insurance.

She addressed the closure of Lakeshore directly, dismissing the notion that its closure led to the current issues. She said $20 million has been invested in the community serving 77,000 people since it closed. She said between 2012 and 2022 there had been a 424% increase in funds expended on mental health. She further claimed that psychiatric bed availability has increased during that period from 2,500 beds to 3,300 beds. She said there were 95 people in Lakeshore when it closed, with 50 who had been there long-term and said they were provided supportive housing.

Tony Benton, CEO of Tennova, said the burden now falls to hospital emergency rooms. He deemed this very inefficient and noted that not only do these individuals not get the care they need, but their treatment in the ER a negative to the other patients. David Hall, V.P. of UT Medical Center said 8,500 to 10,000 people are in mental health crisis in our community and there are not enough workers to care for them. A representative from Peninsula agreed there is a workforce shortage and added that for those who have no home, they are in a cycle of returning to crisis.

Ben Harrington, CEO of the Mental Health Association of East Tennessee echoed the shortage of workers as an issue. He said there is high turnover in the stressful career and there has been a surge in demand. He added that fewer than 10% of therapists are currently taking new patients.

Randy Nichols, Special Council for the Knox County Sheriff’s Department said, “We run the largest mental health facility in east Tennessee.” He said that 15% to 25% of those incarcerated by the sheriff’s office are mentally ill. With just under 1100 in jail on the day of this conversation, that means somewhere around 200 – 275 mentally ill people are in the Knox County jail currently. He said the jail spent $117 thousand dollars last year on psychiatric medications.

Housing was addressed by Bruce Spangler, CEO of Volunteer Ministries, who said (and he is consistent in this message), that more permanent supportive housing is needed. He pointed to Caswell Manor which will open later this year. Jerry Vagnier of the McNabb Center said they are adding 51 housing units for seniors and that there are resources, but not for everyone.

Councilperson Seema Singh asked if expanding Medicaid, as 39 other states have done, would help with some of the issues. Commissioner Williams said it would not, claiming Tennessee has provided for the uninsured and that they can get mental health services. Ms. Singh also asked how we could get more of them out of jail and Mr. Nichols said they have two full-time workers trying to do that every day, but they are overwhelmed.

Representative Johnson pressed the Medicaid expansion question, noting that “forty-plus studies have shown how well it is working.” She directed her question to the community partners representing agencies and asked how expanding Medicaid would make their jobs easier. None stepped forward to speak to the issue. She specifically pressed Mr. Harrington who said with increased access, “we still wouldn’t have the people”

There was consensus that reimbursement rates are severely lagging in Tennessee. It was pointed out that bed capacity is meaningless if there is no staffing for those beds, with Peninsula acknowledging they can only staff fifty of their 90 beds. Commissioner Williams insisted that Moccasin Bend has staffing for all 165 beds.

Councilperson Thomas questioned why we have empty beds and people that need them. Commissioner Williams pointed out that you can’t force people into treatment and many of them are not willing to accept help. She added that we need more people working on the streets to connect them to services.