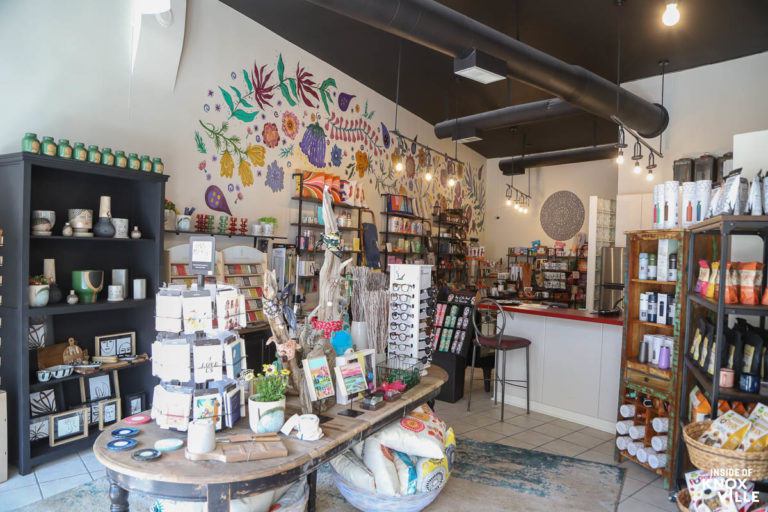 Beth MacDonald has opened Bethie Lou’s Fabulous Gift Store at 110 South Central Street in the Old City (next to Good Golly Tamale). She opened the doors on First Friday in May and says business has been great out the gate. I was there on a Tuesday afternoon and found people shopping when I arrived. In the thirty minutes I was there, other couples came in and made purchases, including a couple from Wisconsin spending their week in downtown Knoxville.

Originally from Knoxville, she’s lived here her whole life, working in the television business for the last forty years. She started as a makeup artist before shifting to location scouting, which she’s done for the last twenty-five years as an independent contractor. She got started while working at Merle Norman in the Mall. She was approached and offered the opportunity to do make-up for I-40 Paradise. She worked her way through the business, including a stint with the television series “Christy.”

As a location manager, her days were long. The first one to arrive, she was often the last to leave. During the pandemic, the days have been sixteen-hour days, which much of the work done via zoom. Economically, the two years were great. She also became a COVID officer for shoots. But for all the income, it was exhausting.

Last fall, she decided to take some time for “self care.” She took Perkins (the wonderfully laid-back shop dog) to the outer  banks of North Carolina for a break. While there she fell in love with a particular shop and the saucy kinds of items they carried. Upon her return she was having dinner with her friend Paula Clancy (who owns Nouveau Classics on the 100 Block) and told her about the shop, the fact that her grandparents called her “Bethie Lou,” and about how exhausted she had become with location scouting.

Paula said she should open a shop, call it “Bethie Lou’s” and locate it in the building Beth, her husband Phillip, and another couple had owned for the last four years. She said it sounded like a great idea over wine with a friend. The next morning? It still seemed like a good idea and she got to work. The building had housed three Airbnb units and they agreed to convert the street level unit into a shop, whereas the others will remain as rentals.

She bought some of the display racks in the store the next day. She went to market in Dallas in January and in Atlanta in February. She found a source of women-owned wholesale businesses that are eco-friendly and began purchasing from them. “My whole basement was a warehouse.” By April they began construction, taking out the furniture and knocking down a wall.

The store has a wide range of offerings, including an infant and young child section with books, toys, blankets, games, and more. She has “something for everyone” she says, including an outdoor section with growler holders, wine backpack, silicon wine cups to pair with that, beach or lake blankets, and even fishing poles.

Afghans made by a woman in Portland, gratitude books, self-care books, and cutting boards. She has “edgy cards, tea towels, and edgy cocktail napkins that are a lot of fun and a little risqué.” She also has candles, pillows, coffee items, and snack items. She has a local line of coffee from “Knoxville Coffee Company.”

She wants to distinguish herself from nearby shops and to complement their businesses, rather than compete. She said she has made purchases from and sent people to the other shops and hopes they will do the same. Having owned the building for a while, she already knows some of her neighbors, like Matt at Good Golly, Jenny Boyd (Boyd’s Jig and Reel), Jane George (Dr. Jane Health and Wellness), and others and she’s happy to be a part of the neighborhood.