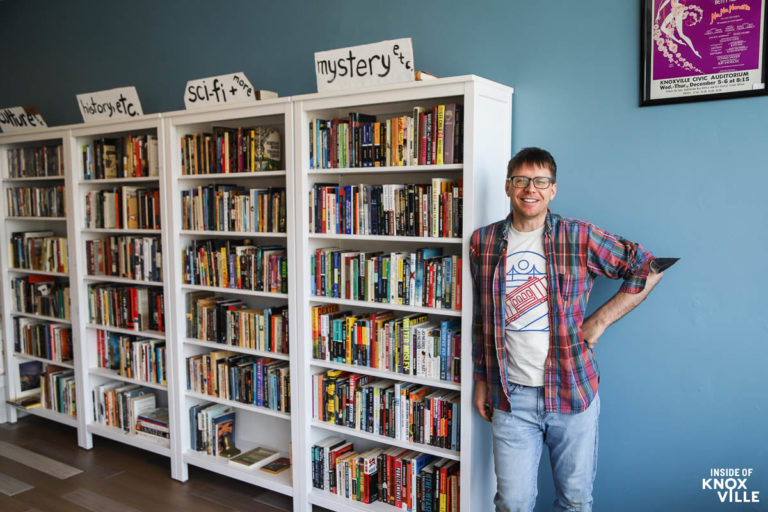 A new bookstore, lowercase books, quietly opened last month at 1530 Washington Avenue in a small node of buildings in the Parkridge community. Owner Bryce McQuern continues to make changes and additions to the space as he begins welcoming customers. Having long been passionate about books, he only recently made the commitment to take the plunge and open his own store.

Born in Indiana, Bryce grew up in Fort Myers, Florida. He worked at odd jobs, including a record store and a bookstore, before moving around a bit. He studied audio engineering in London, moved back, spent a few years in California. In between he managed to get a degree in English from the University of Central Florida.

He started collecting books and records when he was a teenager. His mother always kept him supplied in books and he later became interested in the “nerdy aspect,” of collecting. One fortuitous connection he made early on was with a man named Bob Jones, who was from Knoxville and had worked at McKay’s Books before moving to Fort Myers and opening Silver Platter Records and CDs. Bryce bought records there, eventually working in the store. He first learned of curation of collections in the store. His first connection to Knoxville was through Bob.

He lived in Knoxville for a few years along the way, working at McKay’s about sixteen years ago. He then returned to California before ultimately returning just over three years ago. He said rent had gotten too high and he wanted a change. He’s taught for the last six years, three in English as a Second Language program in Richmond, California, and most recently three years of high school English with the Knox County Schools. He decided to leave last fall and soon settled on the idea of opening a used bookstore. The process took about six months leading to his opening.

He said finding the space and making it look the way he wanted has been the hardest part. He was set on North Knoxville and looked at several places. He noticed the location which became the new store on walks in his own neighborhood. It wasn’t listed for sale and he had to dig to find the owner, but it eventually came together and he’s been hard at making it the way he wants it to be ever since. He’s still working on it and will add more bookcases and seating very soon.

As he builds the collection even further, he is buying books from a range of places and welcomes anyone to bring in books for him to peruse and potentially purchase. He is looking for a range of books that will appeal to different kinds of readers (he often mentions having books his mother might like), but he’s also looking for particular sorts of books that might have a more niche appeal.

He has Signa Classics (he likes the covers), mid-century crime and thrillers, twentieth century fiction by women, and more. He said sometimes the covers and the attractiveness of the books call him, though he says, “I do buy ugly books.” You might find some first editions, but he’s not focused on that or on collectable books. They are, as he says, “hand selected.”

He’s already started having events at the store, including a movie night, with yoga and book readings planned. A bookmaking class will run three sessions next month on May 15, 22, and 29. He’s also hosting concerts, including one tomorrow night ($5) at 8:00 pm featuring Duck Butter and Noremac. On Saturday April 30 he will have another show featuring La Croix Can Recycling Center (the band, not a place).

Other than special events, you can visit the store during normal hours: Wednesday and Thursday Noon to 8:00 pm, Friday and Saturday Noon to 9:00 pm and Sunday 10:00 am to 6:00 pm. To keep up with events and other news, tune in to the Instagram account or the webpage.