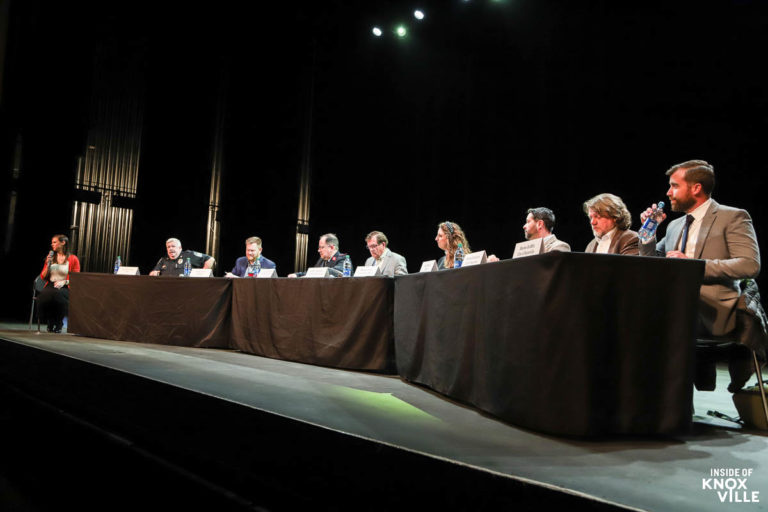 When Nikki Elliott and Downtown Knoxville Alliance recently announced a community meeting on homelessness, no one expected a solution regarding one of our thorniest problems to present itself that evening in the Tennessee Theatre. About 75 people gathered an in her opening remarks Ms. Elliott summed it up, “We are frustrated and we are not solving it tonight.” She said she hopes we can operate as a team to make the situation better.

The intent of the panel interview with questions following was simply to share information about what is being done to address the problem and to introduce those doing the work to the community. It is hoped this will start a conversation about how people suffering homelessness might be helped, while minimizing problems currently experienced by residents and businesses.

Woven throughout their lists of services (available elsewhere, including in articles on this website), the responses also indicated perspectives and approaches taken or encouraged by each agency or group represented. Todd Spangler (KARM), for example noted that while four to five thousand come to them for shelter each year, he emphasized transitional services. such as connecting residents to services and increasing their stability. He emphasized the importance of having residents work for what they get.

Major Henderson emphasized the Salvation Army’s “mission to preach the gospel of Jesus Christ and meet the needs of everyone.” He emphasized helping people through their trauma and said they helped 161 find permanent housing last year.

Bruce Spangler (VMC) said their focus over the years has shifted to establishing more permanent supportive housing, something that appeared universally supported by the panel. He touted the success of Minvilla Manor as an example and expressed optimism regarding the 48 units coming online with Caswell Manor. He said homelessness is a community issue that can only be solved through public policy.

Captain Jones said in his 36 years of experience he’s learned that many homeless people have “lost hope and are existing,” saying that they have lost any drive for life. Saying the police are short-handed and that the local situation mirrors the rest of the country, he said the force has tried to give more emphasis to getting help for those with mental health issues, rather than simply arresting them.

He mentioned the Crisis Intervention Teams and an emphasis on reconnecting homeless people with their families. He also acknowledged the frustration of downtown residents. He said the police struggle with resistance to getting help and with limited drug and mental health support. He said we must “interrupt the pattern.” He said it will take a commitment from state and national leaders, a sentiment echoed by Michael Dunthorn who said, “We need citizens to talk to their state legislators.”

Palmer Cantler said the downtown churches are doing direct ministry, like serving meals at Church Street, UMC, but she said the focus is on connecting them with agencies that can truly help their situation. Asked if it was helpful for organizations to distribute food and clothing on the street, and if not, how that might be communicated to area faith-based groups, Reverend Cantler said that type of help makes the helper feel good, but doesn’t truly provide the needed connection to services, calling it “transactional help” and saying further that it “cuts off goals.”

Captain Jones said that distributing food and clothing in Krutch Park isn’t technically allowed. He said of the people who do so regularly, “They are compassionate,” but if you “constantly give to them, they lose the skill set to help themselves.” He pleaded for the public to support services that are trying to get them longer-term help. He gave an example of a woman who was on the streets for years because of the handouts, but when she began to trust a couple who spent time with her, they were able to get her off the street.

Matt Tillery emphasized that KCDC is working, via housing vouchers to build a network of landlords who will be resources to get people off the street or help prevent them from becoming homeless. He emphasized housing that is not centralized and obviously identifiable as subsidized. Shawn Griffith interjected that people need to be willing to have housing in their neighborhood, saying it is the “root of the issue.” Reverend Cantler added that we must have both “mercy and justice.”

Mr. Spangler said, “It is easy to put pathology on people. Housing has to be available, appropriate, and accessible . . . it is essential for making change.”

Answering a range of questions from the audience, Todd Gilbert of KARM clarified that when most people say they have been kicked it out of their agency, it isn’t true. The only ones prohibited are due to violence, those convicted of manufacturing meth in public housing, and convicted sex offenders.

The most interesting twist during the question and answer session came from a woman who stepped to the microphone and said, “I am part of the problem.” She went on to explain that she brings food to Krutch Park every Saturday and fed “50 people last week.” She said she is “feeding people just like you are,” and exhorted the agencies to “send your outreach people.” She was applauded by a segment of the audience and none of the panelists were willing to confront or contradict her.

Time expired just after Captain Jones said that people are not “allowed” to sleep on the sidewalk and he tells them to “move along.” A final commenter pointed out that the solutions offered are long term and that the current situation is only getting worse. The person said, “Something isn’t working.” No one on the panel responded.

I followed up the meeting by contacting Shawn Griffith to confirm and clarify what I thought I understood him to say that night. He said that roughly 700 persons or families were rehoused in 2021. He clarified that this included 619 who were rapidly rehoused — which is critically important — and that only about 65 obtained permanent supportive housing. The 65 would be among the group most of us likely pictured when we had the conversation. He said the system would be able to house more of the chronically homeless population if there were more housing options. At this time, that system operates at capacity and individuals can only be placed there when someone exits.

I also spoke to Ms. Elliott. She said she thought it went well given everyone’s level of frustration with the issue. She pointed out a couple of speakers from the audience who said they had learned more about the help that is being offered. She felt a necessary educational step was taken and that future meetings will be able to focus more on solutions to specific parts of the problems.

She’s particularly concerned with handouts and the dependency it fosters. She also questions the propriety of a system that allows mass distribution of unregulated food to crowds of people. She would like to see more people involved and more political involvement in the issue. She was pleased that two city council members choose to attend, but wished there would have been more support.