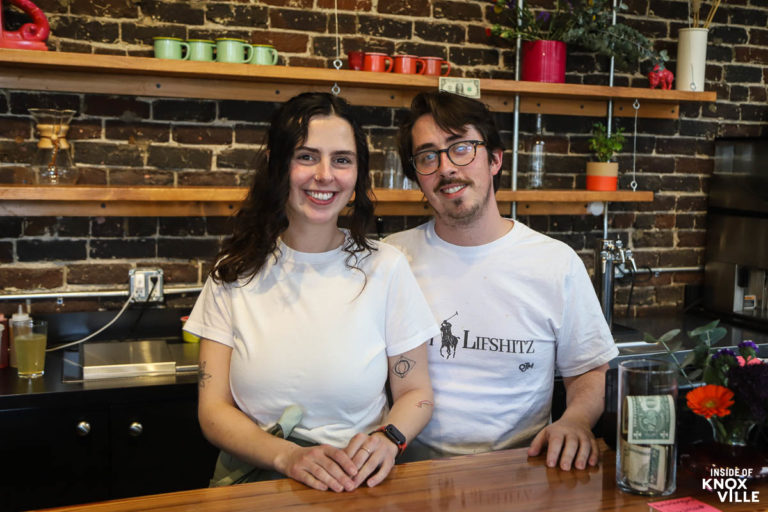 Located in the original Regas building at 318 North Gay Street (where Vienna Coffee was most recently), Potchke Deli bears little connection to its forebear, Regas Restaurant, in the location other than delicious food. Serving food you might find in a Jewish Deli, but with their own little twists, Emily Williams and Laurence Faber, with the backing of partners Brian and Jessica Strutz, are offering something unique to the downtown culinary scene. Serving foods in Kosher style that would be familiar to Laurence’s Ukrainian Jewish grandparents, the couple is set to make their mark in the increasingly diverse dining options available in the center city.

Laurence is originally from the Memphis area but moved to Knoxville in 2009 to attend the University of Tennessee where he majored in International Business and French. Emily is from Knoxville and was also attending UT at the time, studying linguistics. They met then, but it would be a decade before they dated. The two studied abroad, he in Bordeaux, France, and her in Switzerland.

He worked at Tomato Head during college, but began working at Dancing Bear Lodge in 2013, during his senior year. He worked there for seven months before it burned and immediately shifted to work at The Barn where he’d originally interviewed. Both were operated by Blackberry Farm. He took the only position open, as a pastry cook, though he had “never gone to culinary school and I didn’t have any pastry knowledge.”

From the first day when he was asked to make a caramel sauce and he confessed he didn’t know how, he was guided through every step of the way in his pastry education by a very supportive staff. He learned the savory side of pastry making. He said he learned to work hard, be humble, and help those around him as he was helped. He sees a connection in their current endeavor, in which they are teaching people to love Jewish food.

He worked a range of positions in the restaurant, from pastry to garde manger, to meats. He worked as sous chef at The Dogwood, which is the casual dinner restaurant at the farm. After working there for a year, he returned to pastry at The Barn, first as sous chef, then as the head pastry chef. He worked during that time with April Heckathorn and Ben Yusko, two classically trained chefs, who he credits with taking care of the cakes and baking and teaching him their skills, so he was freed to explore new taste combinations and experiment with local fresh fruits.

Emily first worked at Altruda’s while in college and later Emilia and J.C. Holdway, among other places. “I always loved going to work. I never felt like I had something better to do. It felt very natural.” When the pandemic hit, Emily began baking, starting sourdough bread. Laurence helped her learn and the two enjoyed working together. They began sharing it with friends.

While he continued working at Blackberry, she would bake. In the evening Laurence, who is Jewish, would come home and make Israeli food and she began shifting to Jewish pastries. She began working her way through the Breaking Breads cookbook by Uri Scheft. While watching Seinfeld, an episode in which Elaine is forced to settle for a cinnamon Babka, rather than her favorite chocolate, prompted her to call it “lesser babka,” Emily was inspired to make babka, which is now on their menu as “Lesser Babka.”

She made it said it was terrible at first, but they kept trying. Eventually it was good enough they felt they could sell it, so she could make some extra money as her unemployment was running out. She offered it to her friends, hoping thirty people a weekend would buy it, which, at six dollars a loaf, would give her enough money for rent. She launched an Instagram page for “Lesser Babka,” hoping for fifty followers. It now has over 2,600. People lined up down the street.

As the demand grew, the couple bought a new stove, refrigerator, and dishwasher to make the babka. It became obvious that the biggest obstacle to the growing business was Laurence’s job. He left Blackberry Farm in a leap of faith in the new enterprise. He put in notice in January 2021.

The couple planned to open a restaurant, but plans fell through. He wanted to cook Israeli food, but they shifted slightly to Jewish food. They realized it was the 100th anniversary of his great-grandparents arriving in the U.S. from the current Moldova and Ukraine border. They spent last August through October traveling in Ukraine “gathering inspiration.” Laurence says, “I wanted to tell a story that was truly personal.”

They traveled around the Black Sea and Ukraine, visiting the town his grandmother came from. They went on a cooking expedition in the Carpathian Mountains with a group ten chefs from Ukraine and a few from other countries. They camped in the mountains and cooked with what they could find. They’ve kept in contact with the friends they made from Odessa, Kiev, and Kharkiv, Ukraine, cities which have been prominent in recent news.

They recently hosted a fundraiser at the new location, selling food to raise money to send to Ukraine. They raised $5,000 that they sent to the people they knew, as opposed to giving it to an organization. The food was used to provide food and to help transport people to safety.

They did a couple of pop-ups at A Dopo, cooking a range of dishes, including Jewish dishes from various parts of the world, as well as Israeli and Palestinian dishes.

My great grandmother’s recipes have kind of been lost, but every holiday would be the same things that she would make. I talked to my family, and I was trying to look for my great-grandmother’s recipes. Besides the things that were passed down like the knish and latke, they told me about other dishes, but we really didn’t have recipes for them. That’s what really started everything: Well, if I don’t have recipes for my grandmother’s eggplant dip or varenyky, then we need to go to Ukraine and figure it out.

They had a different concept in mind and that may come later. Due to supply chain issues and back orders, it became clear that concept would take too long. They looked for an opportunity they could put together more quickly and as Emily put it, “Let’s see what we can do in a really short amount of time, with a really low budget, and have fun for a year while we plan this other thing.”

Laurence said they created the concept in the next-to-last week of December and signed the lease January 1. “We thought about Potchke for about two weeks before we said ‘yes.'” Jessica added, “This is all a moving experiment and it’s a lot of fun.” They knew Brian and Jessica Strutz only through Blackberry connections and being loyal customers. Brian offered the idea of the popups and has been very helpful teaching them about the business. Emily said, “I think Brian has a sincere desire to see the advancement of the culinary scene in Knoxville.”

The couple is also keeping a slender thread of a connection to past Jewish deli’s just down the street on the 100 block of south Gay. The best known Jewish deli in Knoxville for many years was Harold’s, located on that block from around 1950 to 2005. Harold Shersky, a downtown icon, owned the restaurant for the duration. Harry’s, owned by Ben Becker and Amy Willis-Becker, was open for a year in 2011. Operating in the same spot as Harold’s it offered some of the same foods, and more. The Beckers have just started Fierce Cultures, making krauts and kimchi which will be used at Potchke Deli.

The menu at the restaurant focuses on dairy, vegetables, eggs, and smoked fish. The couple made the decision not to focus on the meats associated with delis for environmental, health, and financial reasons. The only meat other than the smoked fish is “the matzo ball chicken stock.” While nothing in the deli is blessed by a Rabbi, the couple serves their food following Kosher practices. There is no beef, shellfish, or pork.

The menu will evolve but is starting with a “rip and dip” poppyseed and onion, sunflower sesame, or everything bialy with labna, eggplant, or lobio dips. The bialy appears like a bagel, but it’s quite different. Originating with Jews who fled Bialystok, Poland during the holocaust, the bread is a New York staple, but is hard to find elsewhere, including the city from whence it is named. They are baked, not boiled.

A tartine, or open-face sandwich is offered with a salad and house pickles. Toppings include lox, whitefish, avocado and more. They have a melt called the Bar Mitzvah Show Stopper which includes whitefish and trout salad, melted cheddar cheese and lemon marinated celery, radish, and cucumber. Other melts will be added.

Soups include Matzo Ball and Borsch(t). They put the “t” in parenthesis because in Ukraine there is no “t.” The last letter appears to be a Yiddish addition and it is commonly spelled that way in this country. They fell in love with it in Ukraine. Blintz, which the menu describes as “cut little Yiddish crepes” come with potato and egg or cheese. The “Lesser Babka” anchors the menu. Laurence and Emily said the current babka is the result of a year-and-a-half of work which filled up a notebook and part of another.

I sampled a blintz, a bialy, and, of course, the Lesser Babka. Words do not do justice. To have a new restaurant serve food so different from anything else available downtown and to have it taste so good is a great gift, indeed. Everything was delicious, but that chocolate Babka, steaming just a little as it hit my table, was divine.

The menu is primarily vegan, except for the fish. It is very easy to eat vegetarian. Gluten-free options are available. Coffee drinks and several seltzer drinks are available.

The couple did a soft opening over the weekend but starting tomorrow they are officially open for regular hours, which are W-F, 8:00 am – 3:00 pm, Saturday and Sunday, 9:00 am – 3:00 pm, closed Monday and Tuesday.