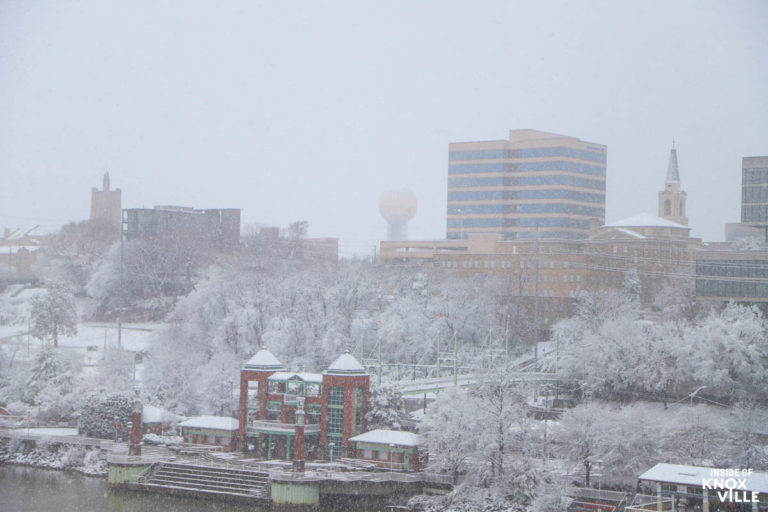 I posted the first photo shown here on Friday afternoon. It was a beautiful late afternoon and warm enough that sitting outside with a cool beverage was a pleasant option. It was about 66 degrees at 4:30 pm. By sometime around 2:00 or 3:00 am, the snow began to replace the rain that had set in.

By about 7:30 am when I set out to take photographs, the temperature had fallen into the low 20s, about four-to-six inches covered most surfaces other than streets, and as Bob once said, “The wind it was howlin’ and the snow was outrageous.” The line kept running through my head as I walked around.

Before I finished, the snow fell heavier and the wind drove it quickly enough that it literally hurt as it struck my face. Very little beyond my face and hands were exposed, but my hands complained loudly. The camera worked consistently until about an hour-and-a-half in when it also began to grumble.

Since roads weren’t covered, I focused on smaller things. The trees were consistently beautiful as they were heavily lined with snow. I hope the cold didn’t damage the small buds we’ve seen peeking out. I also noticed an attempt to turn the waterfall in Krutch Park into a shade of green in honor of St. Patrick’s Day. I really felt for the planners of the parade who had to cancel their third consecutive outing.

The snow-capped sculptures and statues caught my eye. The suffering those poor suffragists continue to endure is beyond the pale. Then, Rowing Man has been sinking in (or rising from) an ocean of cement for decades. The lone soldier guarding the courthouse seemed as determined as ever. He’s seen worse.

I took a slight detour into Knoxville History and the Blount Mansion looked quite handsome in a coat of snow. It’s crazy to imagine how many snows it has seen in its 225 or so years. I stopped in to visit with the Knoxville’s founders at the First Presbyterian Cemetery. I always enjoy photographing cemeteries in general and this one in particular. As always, the inhabitants had little to say. Another snow doesn’t have much impact one way or the other.

Back home, I took the final shot to bookend the first. About seventeen hours gap produced a completely different world. It was beautiful. Now I’m ready for spring.