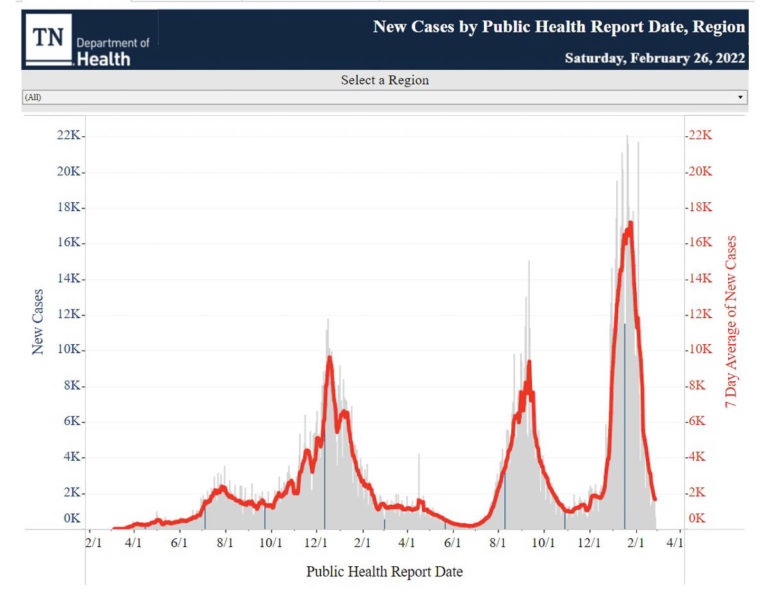 A few weeks ago, when it became obvious a crest in cases and other data was coming, I began thinking about the haphazard way I’ve decided when to stop reporting and when to return. I looked back at those points and developed a set of markers that could spring a departure from the reporting or a return to it.

They aren’t hard-and-fast, but it makes my decision feel a bit more objective. I’ll detail the cut-offs as I go through each section below. The numbers are so incredibly reduced from just a few weeks ago, that is remarkable they are still well above where I’ve paused before. I really have gotten acclimated to the higher numbers and was very surprised when I realized that what feels pretty good, right now, was considered very high prior to the Omicron surge.

In a nutshell (spoiler alert), while some of the markers were met, most were not, and I’ll be reporting for at least one more week. I may not wait for a straight sweep of all the goals, but more of them need to be in line. I’ll also give more weight to local numbers.

One final point: My cutoffs are not aligned with the CDC or anyone else, so don’t judge your relative safety on these markers. It is simply my opinion that below these cutoffs, there is not a clear and present health emergency that warrants me interrupting coverage of downtown news.

At the international level, I’m looking for us to drop below 500,000 cases per day and 7,500 deaths per day. We aren’t very close in cases and deaths also missed the mark.

The current rate remains about 81% (last week I said “53%,” which was inaccurate: It should have said 105% at that time.) above the peaks of any of the previous surges, the worst of which topped out at about 828,000 new cases per day. The 61.4 million active cases globally reflect a decline from the pandemic record of 74.6 million set three weeks ago. There have been about 439.3 million confirmed cases since the beginning of the pandemic.

Deaths also continued to drop week, with an escalating 17% decrease, following a 8% decline last week. For the seven days just ended, 65.5 thousand deaths were reported, for an average of 7,929 deaths per day. Almost 6 million people have died of COVID-19 since the beginning of the pandemic.

At the national level, I’m looking for less than 75,000 new cases per day and fewer than 1,200 deaths per day. We’ve reached the case-per-day threshold but have a way to go on deaths.

As it has from very early in the pandemic, the U.S. leads the world in cases with about 80.7 million and in total deaths with over 977,000.

For the third consecutive week, however, the United States is not leading in new cases. Over the last week, the U.S. has averaged 57,938 new cases per day, fewer than seven other countries over the same period. New cases in the U.S. have dropped 58% over the last two weeks, and about 35% in just the past week. There are currently about 26 million active cases in the U.S., down just over a million from last week and from the pandemic record of 29 million active cases set four weeks ago.

While rates aren’t changing much, vaccinations do continue to be given in the U.S., with an average of 449,000 per day given in the last week. Most of these are booster shots. Almost 60% of people over age 65 have gotten a booster, while percentages are much lower for all other age groups, including just 29% of adults under the age of 65.

The U.S. has a 65% vaccination rate, ranking 63rd in the world, down two spots from last week, with Sri Lanka and El Salvador now above us. The U.S. ranks 22nd worst in per capita cases in the world (among countries with at least 1 million in population, and down one from last week as our rate is now better than Uruguay) and 15th worst in per capita deaths since the beginning of the pandemic (the same as the last two weeks).

At the state level, I’m looking at three metrics. I’d like to see cases below 1,200 per day, deaths below 40 per day and COVID-19 hospitalizations below 1,000. We’re still missing on all three marks, but we should get close on cases, at the least, by next week.

The dramatic decline in new cases continues. The current report (which only includes data through 2/26) reveals a 47.2% drop from just one week prior. This follows similar drops in recent weeks and results in a current average of 1,666 new cases per day in Tennessee in the period covered. The worst single day in the period was 2,669 on 2/22, early in the period. As recently as 2/3 a daily new case total of nearly 22,000 was reported.

The state has confirmed over 2 million cases and 24,483 deaths from the illness. The state remains fourth in most per capita cases in the U.S. but moved up another spot to claim the fifth worst COVID-19 death rate in the country, as we moved past Louisiana.

According to the new state data published yesterday, an average of 72 Tennesseans died each day from COVID-19 last week, down from 82 per day the week before. Hospitalizations decreased by a net of 73 each day last week.  About 10,300 tests per day were reported last week, down about 24.3% from the previous week. The average positivity rate for the week was 11.48%, down from 17.68% the previous week. The goal is 5%.

About 30,800 vaccinations were given over the last week, down from 32,300 the week before. Tennessee’s 52.7% vaccination rate earned 44th best out of the 50 states this week, the same as last week. Oddly, vaccinations are reported every day, unlike any other COVID-19 related data in the state.

At the local level, I’m following four metrics. I’d like to see cases below 100 per day, deaths below one a day, hospitalizations below 250, and active cases below 1,000. The great news is that we hit the mark this week on two of the four, and we may hit them all by next week.

Over the seven days included in this data, the KCHD reported 486 confirmed new cases, for a daily average of 69 per day, down 56.3% from the week before, which makes four consecutive weeks of 40% or greater drops each week. Just over a month ago we were averaging an astounding 950+ cases per day. We’ve had fewer than 100 confirmed cases for eight consecutive days. The last time that happened was December 10-16.

Probable cases, which likely includes the portion of the home tests which are reported, also continue to fall rapidly. After averaging over 300 a day about a month ago, this reporting period revealed 39 per day.

After setting a pandemic record just five weeks ago, with 14,630 active cases, those numbers also continue to plummet. Now, roughly 90% lower than that peak at 1,490 active cases, the number dropped by 54.3% in just the last week. This is the lowest number of active cases in Knox County since December 23 (1300).

As is always the case, both the rise and fall of deaths lingers after the rise and fall of cases. Deaths remain high while cases have fallen dramatically, but we know they will decline soon. An additional fifteen COVID-19 deaths were reported in the county for the week ending February 26, up from the 11 reported a week earlier. Of those 15 deaths, one death was a person between the ages of 18-44, three were 45-64, three were age 65-74, and eight were 75 or older.

UTK is reporting just 7 active cases, down from 31 a week ago. The Knox County Schools are currently reporting 18 known cases, down from 26 reported one week earlier. If each of these numbers is anywhere near correct, COVID-19 is virtually gone from the two largest institutions in the county.