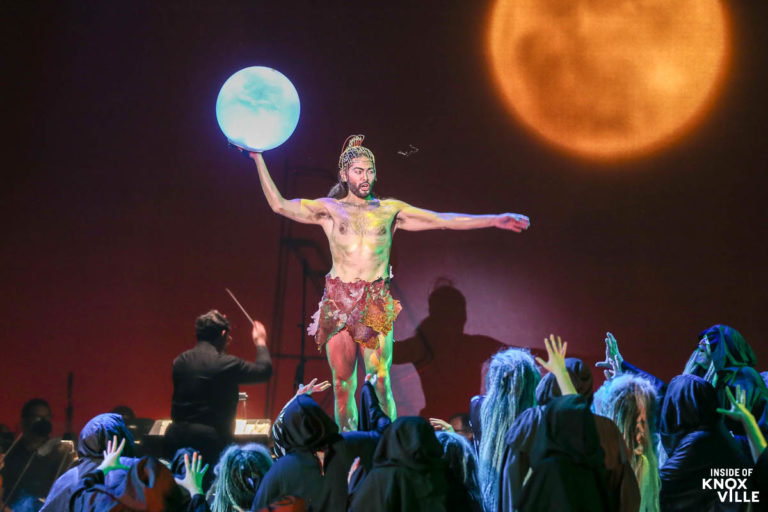 Knoxville Opera is presenting a revival of Mefistofele with Hidenori Inoue making his KO debut in the title role. Kirk Dougherty plays Faust, while the principal cast is rounded out with Abigail Santos Villalobos (Margherita), Allison Deady (Marta), and Tim Pope (Wagner). Brian Salesky, in his seventeenth and final season as Artistic Director for Knoxville Opera, is Music Director and Conductor. Brian Deedrick is Stage Director, and Brynn Yaeger is Choreograher.

The opera, composed by Arrigo Boito, was his only opera composed with music. He was a well-known and respected librettist, working with well respected musical composers such as Giuseppe Verdi. Debuting in Milan in 1868, the opera was a resounding failure. The opening night audience grew openly hostile and the production was closed by the police after two performances.

Recognizing that length was one of the issues (the first night performance ended well after midnight), Boito shortened the opera, re-wrote portions, and shaped the production into a more traditional presentation. The revised version was a success when it debuted in Bologna in 1875, and a further revised version was successful a year later in Venice. The opera debuted in both London and Boston in 1880. It has enjoyed numerous revivals in all the years since.

One of many works based on the Faustian legend, Dr. Faust, a learned, but unhappy man, trades his soul to the devil for a life of happiness. His youth is restored and he finds love, but things do not go as he had hoped and his happiness results in far greater unhappiness and tragedy around him. In the end, once more an old man, he fights desperately to save his soul from the devil.

I was able to attend the final dress rehearsal, which is where I took the photos you see here. As always, there is beauty in sets and costuming, choreography, and music. I particularly loved the choral pieces, starting with the beautiful intro piece. I’m nothing if not consistent — I looked back at my review of the opera’s 2015 version at Knoxville Opera and found I’d felt the same way.

More than anything else, for me, it felt great to do something I used to do before the pandemic began. Just to experience great art again, something I took for granted for years, felt exhilarating. I hope you are able to do the same, soon. If you choose to go to the opera this weekend, please be aware that they are maintaining a strict masking requirement. You’ll find tickets here.