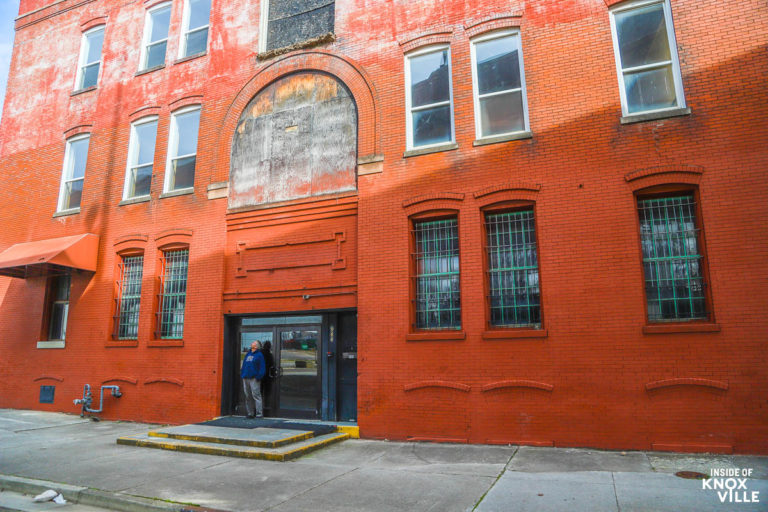 Scott and Bernadette West have purchased the former Concourse and International buildings at 940 Blackstock Avenue. The buildings face Ramsey Street, which is considered a closed street and they are hoping to return it  to its original name, Asylum Avenue. It sits under the elevated Western Avenue and is the road it replaced.

The first issue the Wests will face, Scott acknowledges, will be getting people used to coming to the spot. It’s just over a ten-minute walk from Market Square and sits in proximity to the Old City and virtually adjacent to the World’s Fair Park. With all those near-neighbors, it would imply a simple connection, but the walk involves crossing under elevated roads, or walking streets with no sidewalks. There are solutions they are currently exploring.

The first phase of their plans for the new property will be the concert series “Moonrise in the City,” a play on Sundown in the City, which is nearing its 25th anniversary. Like that festival, Scott feels the new series will introduce large numbers of people to a long neglected part of downtown. The two acre parking lot on the site could accommodate up to 10,000 fans for the free shows. He hopes to have a great line-up of bands, food trucks, and beers on the private lot.

The series would be planned to start this September and October on Thursdays and (sometimes) Friday nights, with a family atmosphere similar to Sundown in the City when it started. He’s considering ways to shuttle people to the area. The shows would run from 6:00 PM to 10:00 pm. He’s envisioning a stage under the overpass from I-275 in order to provide shelter for the musicians and equipment. In the long term, he plans a covering of some sort for the entire space, with dramatic lighting visible from the Interstates. He’s dubbed this the moonsphere to echo the nearby sunsphere.

Development of the entire site, he sees as a gradual affair, referencing the current 40th anniversary of the Sunsphere as an appropriate beginning and alluding to the 50th anniversary as a target to have the entire site developed into a destination entertainment district. The site itself, including over three acres, is significantly larger than Market Square, and the 70,000 square feet of building space offers many possibilities.

A permanent stage will come later, but for now he’ll keep it simple and place a temporary stage. For any Friday night concerts in the fall, he sees it as a part of tailgating for UT games. There is a large adjacent city parking lot which also may be able to be used for parking for the shows.

Longer term plans include making the entire site a unified destination. Large portions of the interior space have not been used in years, after an early life as warehouse space for companies like Mountain Dew. International Harvester, he thinks, used a portion of it. In their new iteration, the buildings will eventually include bars and retail and more. While plans are fluid, he plans to open some of the new concepts in the building in 2023. There are possible new entrances, balconies overlooking the concert site, rooftop access and more.

He’s envisioning contracting artists to construct the décor to a theme. While the use is in flex, he wants to have a retail concept that goes beyond food or beverage. He’s talking in terms of a million dollars of “finishing art,” to create a Lunaverse. He’s imagining dozens of artists taking portions of the space. He’s also talking about having elements of an “urban park,” including such elements as a climbing wall, skate park, BMX course, or maybe frisbee golf.

He sees the initial demographic coming to this new outpost as young. “The energy that drives growth of an area like this is going to be young. Later when it feels safe and you have high-end restaurants, it’s a mature space. When you are young, it’s coffee shops, galleries, and skate parks. To support it all, there has to be income and for that he’s imagining food, drink, and retail.