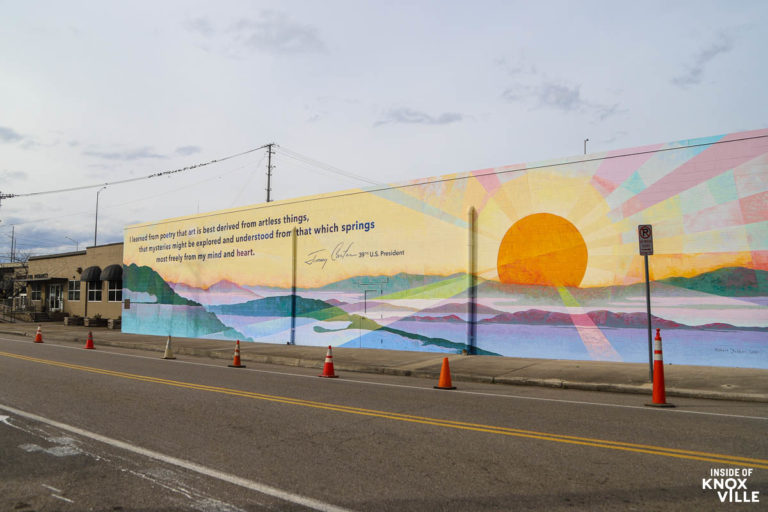 A concept developed by R.B. Morris when he served as Knoxville’s first Poet Laureate (2016-1018), the East Tennessee Sunrise mural by artist Robert Felker was formally presented to the Parkridge community late last week. Mr. Felker developed and executed the work in 2021 with the help and support of the Parkridge Community Organization, and with private funding through Randy and Jenny Boyd, Adrienne Webster, Lucienne, and John and Stephanie Felker.

Since beginning their work with Habitat for Humanity in 1984, President and Mrs. Carter have helped to build, renovate and repair 4,390 homes in 14 countries alongside more than 104,000 volunteers through their annual work project. Since its founding in 1976, Habitat has served more than 22 million people around the world.

At the event, Knoxville Habitat President and CEO Kelle Shultz introduced the project. KUB President and CEO and Knoxville Habitat Board Chair, Gabe Bolas, expressed his appreciation, while R.B. gave a background of the project and read the full poem excerpted on the mural. Robert Felker, who is also the artist for the wonderful mural alongside the University of Tennessee Conference building under the pedestrian bridge on Clinch Avenue, also spoke, as did Lynne Randazzo of the Parkridge Community Organization.

Ms. Shultz expressed her gratitude for the work that went into the development and execution of the mural. She told the story of Jimmy and Rosaland Carter’s involvement with Habitat, beginning shortly after the end of his presidency. She also recounted being present for his first public statement after the attacks of September 11, 2001.

R.B. said a project he wanted to bring into the city as Poet Laureate was “wordscapes,” integrating words into the city. It started with the Cormac McCarthy quote on the Clinch Avenue mural on which he worked with Robert. He spotted the Habitat for Humanity wall and, with President Carter’s work for them, and his poetry in mind, it seemed a natural fit.

With encouragement from the city, he got permission from the Carter Foundation and the publisher to use the quote and to include the full poem on the plaque attached to the mural. He then approached Habitat and told them what he’d done. Habitat was supportive, but the city expressed some concerns.

“Next thing you know we’re in a pandemic. And I feel terrible about going to a president and saying we’re going to do something and then not doing it.” The city agreed for R.B. to take on the project himself and he approached Robert Felker. They were able to line up funding and he said the Parkridge community was very supportive.

Robert Felker ended the remarks by saying how excited he was from the beginning when R.B. approached him. He talked about how supportive the community members were as they passed by and how rare it is for an artist to be able to interact with the public as he works. Many helped on a volunteer day that he worked in along the way. He said the project was a joy. He said:

My hope is that when people encounter the mural, they think about the words and what it means to them and when they gaze at the image they see and sense the hope and possibility that each new day brings.

Lynne expressed her gratitude for what art does for the community. “We don’t agree about a lot of things, but this was something everyone unanimously agreed about, that we liked it and wanted to help.”

Itinerant Songsters Visit Our Village by Jimmy Carter
When some poets came to Plains one night,
two with guitars, their poems taught
us how to look and maybe laugh
at what we were and felt and thought.
After that, I rushed to write
in fumbling lines why we should care
about a distant starving child.
I asked how we can love the fear
and death of war, rejecting peace
as weakness; how a poet can dare
to bring forth out of memory
the troubling visions buried there,
and why we barely comprehend
what happens out in space.
I found
my words would seldom flow, and then
I turned to closer simpler themes:
a pony, Mama as a nurse,
the sight of geese, the songs of whales,
a pasture gate, a racist curse,
a possum hunt, a battle prayer.
I learned from poetry that art
is best derived from artless things,
that mysteries might be explored
and understood from that which springs
most freely from my mind and heart.