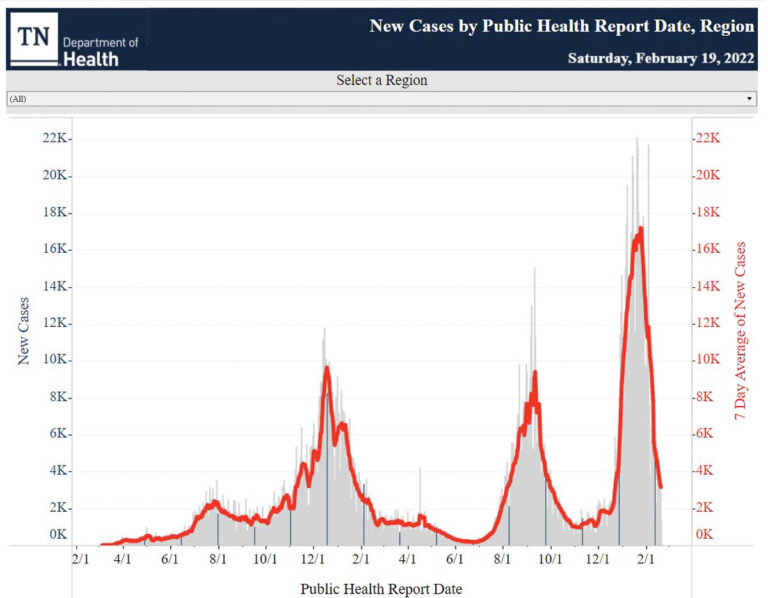 There is much included in today’s report to celebrate. By virtually ever metric from international to local, the numbers paint an improving picture. With declining risk, I took a moment to compare current numbers to the last time I stopped reporting (the end of October), considering whether we’ve reached a point that I might press pause, once more.

In looking back, I found that international case numbers are about four times higher now than they were then, and deaths are about 20% higher. U.S. cases are also about 20% higher, while deaths are 90% higher. Case rates in Tennessee are about 170% higher than at the end of October, as are COVID death rates. Local case rates are over 200% higher than those at the end of October, while death rates are about 21.5% lower if you just look at this single week of data. Local hospitalizations are about 61% higher right now, while active cases are about 178% higher.

Taken all together, the numbers suggest to me I should continue a little longer with this round of reporting. As quickly as the numbers are dropping, that could change in the next week or two. After that, the next question for me will be how low the numbers go and how long the decline will last.

A look at the state case graph or the local case graph reveals some trends. We’ve seen surges, followed by lulls. It seems we are headed into another lull. But all lulls aren’t created equally. The last pause (fall 2021) didn’t produce the low numbers we saw in the previous pause (summer 2021) and it didn’t last as long. From the peak of the first surge to the second was about nine months. The next trough only last just over four months.

Are more rapid waves, followed by larger peaks and not-so-great lulls the new pattern? Did Omicron burn through so much of the population that we get a longer, better break? Could that have been the last major surge? We don’t know. At this point, we’d have to say another surge is likely, and with U.S. and Tennessee vaccination rates so low, we are vulnerable. But maybe not.

In the meantime, I’m watching the numbers and I’ll probably soon take my own pause from being a health reporter. I’ll come back when the numbers tell me I need to do so. I plan to seize the moment and enjoy springtime in East Tennessee, a resurgent festival season, and, with a little luck, some travel.

Over the last week, just over 12.1 million new cases of COVID-19 have been reported across the world, a 17% decrease following a decline of 21% last week. Daily cases are now running about 1.7 million per day, down from last weeks’ 2.1 million. While cases are currently declining globally, it’s worth noting that many countries, many in Asia, with significant populations are currently seeing large increases, such as Singapore (+57%), Vietnam (+59%), South Korea (+83%), and Hong Kong (+298%). Should a large surge sweep Asia, the global decline could be reversed.

The current rate remains about 53% above the peaks of any of the previous surges, the worst of which topped out at about 828,000 new cases per day. The 66.1 million active cases globally reflect a decline from the pandemic record of 74.6 million set two weeks ago. There have been about 428.9 million confirmed cases since the beginning of the pandemic.

Deaths, which lag cases both on the ascent and the descent, shifted downward this week, with an 8% decrease, following a 7% decline last week. For the seven days just ended, 65.6 thousand deaths were reported, for an average of 9,371 deaths per day. Over 5.9 million people have died of COVID-19 since the beginning of the pandemic.

As it has from very early in the pandemic, the U.S. leads the world in cases with about 80.3 million and in total deaths with over 963,000.

As I reported last week, however, the United States is not leading in new cases. Over the last week, the U.S. has averaged 81,823 new cases per day, fewer than five other countries. New cases in the U.S. have dropped 66% over the last two weeks, and about 42% in just the past week. There are currently about 27.1 million active cases in the U.S., down about a million from last week and from the pandemic record of 29 million active cases set three weeks ago.

New case numbers continue to drop sharply from pandemic highs reached just four weeks ago. The current report (which only goes through 2/19) includes more encouraging numbers. After a 50% drop in just one week in the last report, the latest reflects an additional 37.1% drop, from 5,018 new cases each day, down to 3,158 per day. The result is a 69.8% drop in two weeks. The highest single day total reported two reports ago was 21,772, in last week’s report in the high was over 6,500. In this week’s reporting period, the worst day included just over 5,200 new cases, and that early in the period (2/14).

The state has likely surpassed its 2 millionth case by now, but as of last Saturday, Tennessee’s pandemic total for cases had reached 1.995 million. 23,981 deaths from the illness have been confirmed. The state remains fourth in most per capita cases in the U.S. but has now moved to sixth worst in per capita deaths since the beginning of the pandemic, as the state surpassed West Virginia.

According to the new state data published yesterday, an average of 82 Tennesseans died each day from COVID-19 last week, up 28 per day from the week before. Hospitalizations decreased by a net of 91 each day last week.  About 13,600 tests per day were reported last week, down about 7.5% from the previous week. The average positivity rate for the week was 17.68%, down from 26.26% the previous week. The goal is 5%.

About 32,300 vaccinations were given over the last week, down from 38,800 the week before. Tennessee’s 52.6% vaccination rate earned 44th best out of the 50 states this week, up one spot from last week (we passed Arkansas). Oddly, vaccinations are reported every day, unlike any other COVID-19 related data in the state.

Over the seven days included in this data, the KCHD reported 1,104 confirmed new cases, for a daily average of 158 per day, down 45.1% from the week before, which follows drops of 40% or above for each of the previous two weeks. The worst day in this reporting period included 215 cases, while the previous period reached as high as 397. Two days in this period were under 100, the first days under 100 new cases since December.

Probable cases, which likely included the portion of the home tests which are reported, also continue to fall. After averaging 110 a day a week earlier, this reporting period revealed 63 per day. Two weeks ago, the number was above 300 per day.

After setting a pandemic record just four weeks ago, with 14,630 active cases, those numbers also continue to plummet. In the latest data, the KCHD is reporting 3,125 active cases. This is the lowest number of active cases in Knox County since the end of December.

The number of COVID-positive patients in area hospitals also continues to drop and the pace of the drop may be increasing. After dropping 7.6%, then 13.8% week-over week, the number dropped 26.7% in this reporting period. As of 2/19, there were 385 COVID-positive patients in area hospitals, down from 525 a week earlier. There are 100 patients in ICUs (down from 115 the previous week) and 63 on ventilators (down from 78 the previous week).

An additional eleven COVID-19 deaths were reported in the county for the week ending February 12, down dramatically from the 26 reported a week earlier. In addition, the KCHD added seven deaths to January and 3 to earlier periods in February, for a total of 21 additional deaths. Of those 21 deaths added today, two deaths were added between the ages of 18-44, three people were 45-64, six were age 65-74, and ten were 75 or older.

UTK is reporting 31 active cases, down from 43 a week ago. The Knox County Schools are currently reporting 26 known cases, down significantly from  67 reported one week earlier.