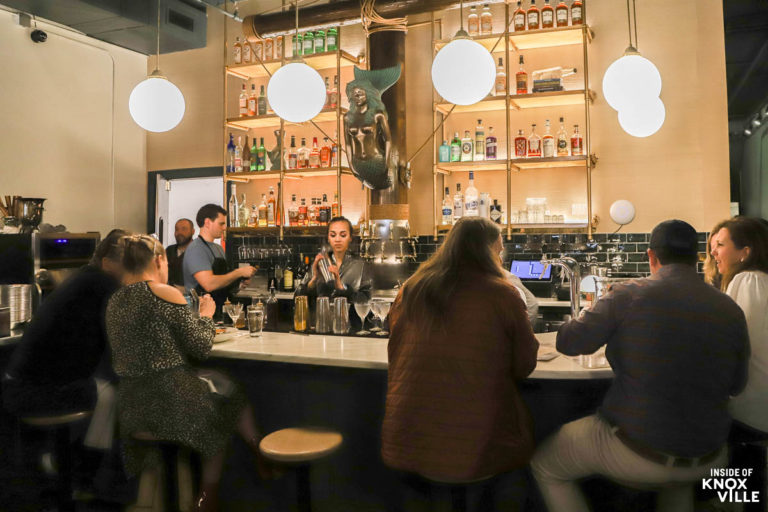 After a long journey (detailed here), the Brass Pearl opened at 24 Market Square on Wednesday. For the initial opening, they are operating by reservation only That should change soon, allowing for drop in and carry out. I was lucky and slipped in a carry out before everyone got that memo.

The restaurant wasn’t packed when I stepped in (it was early), but there was a good crowd and when I looked at the online reservation system (linked above), it appeared they are booked through the weekend. The atmosphere is elevated, but not stuffy, and everyone seemed to be having fun.

We enjoy sampling a range of items off any new menu, but we focused on oysters in this case, since that is the primary focus of the restaurant. As you can see from the menu, which I’ve included here, they also offer shrimp, fish, and steak as well as a burger if someone in your party isn’t interested in seafood.

In the end, we had a half-dozen each of baked oysters, oyster Rockefeller, and fried oysters divided between us. We also couldn’t help but split the lobster bisque. I paired mine with a lovely wine and we vastly enjoyed every bite. The fried oysters were a little too soft for Urban Woman, which made them perfect for me. They are also served with a drop of hot sauce, which was perfect for me, but not so much for her. All of which meant I scored an extra, delicious, fried oyster.

Beyond that, we both adored the oyster Rockerfeller, and the lobster bisque. Urban Woman voted the two an equal favorite, while I gave the edge to the Rockefeller. Little bacon pieces on the Rockerfeller were a perfect flavor combination, while the bisque had sourdough croutons which were divine.

All in, it was enough food for the two of us for $58, plus tax and tip. A line is added to the bill for an additional tip to the oyster shuckers. We also didn’t buy beverages, so you can see, with tax, tip, and beverages, and dining in, this meal would have run around $100. The atmosphere is extremely inviting and the food is delicious, so the value is there.