Brass Pearl to Open in Late February at 24 Market Square 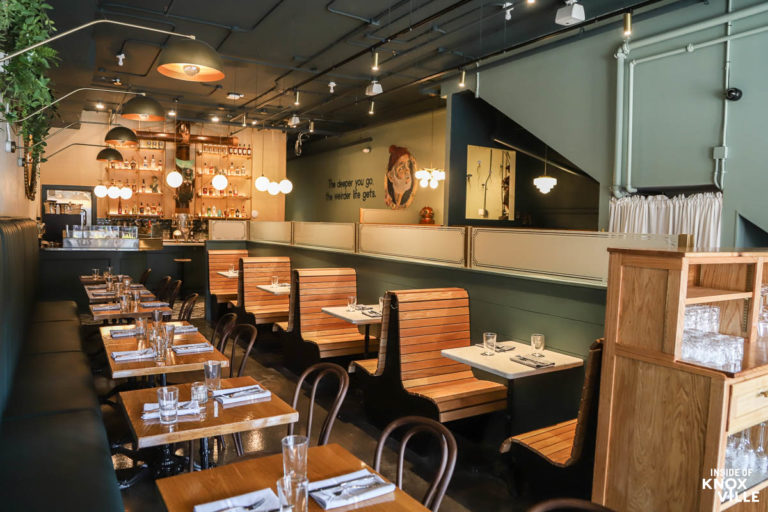 The long-anticipated oyster bar and seafood restaurant, The Brass Pearl, at 24 Market Square is nearing readiness, and an opening in late February is anticipated. Owners Niko Angelos, Bill Angelos, and Ben Austin, also owners of Stock and Barrel, and Chivo, say it has been a very interesting journey.

The group took the space in the auspicious month of January 2020 with no idea of what would come next and with plans to open in June of that year. The pandemic began and by spring they realized it would not be short. The Nashville tornadoes destroyed the offices of their original contractor. By summer, after struggling with whether to move forward, and with great support from building owners Scott and Mahasti Vafaie and Scott Partin, they decided to move forward.

With a new engineering group and contractor, demo began in the fall of 2020 and construction began in early 2021. With staffing shortages and other struggles to keep their other businesses going last year, their attention was admittedly divided. They hired a manager for the new restaurant who received a “dream offer” and left.

Stock and Barrel closed for floor repairs, then a fire shut it down for three weeks and required their attention to reopen. At the Nashville location of Stock and Barrel they lost employees to the construction business and struggled to replace them. Application flow here has also been slow, but it has improved. More recently they could not get their new heating unit installed until the ice rink was removed from the square.

At this point, Bill said it is almost an effort to remember how to open a restaurant because it has been so long. They said psychologically it became difficult to continue with so many variables which were out of their control. Bill said, “It felt like it was coming from every direction. It was wild. It was a mind game, just trying to find the right time.”

The group, after opening a burger and a taco concept wanted to focus on something they personally enjoy but have a hard time finding locally. They love oysters and seafood and wanted to put their own spin on it. Bill said, “We fell in love with this space and the size of it. We thought it would be a good addition to downtown.”

The group will have four-to-six different kinds of oysters rotating daily depending on what is available on the raw bar. They’ve had to change the menu based on availability and pricing. Lobster, for example, has doubled in price. Prices will range from appetizers at $7-$14, sandwiches $13-$15 (they will have po boys with shrimp, oysters, or fish), and entrees from $18-$35. The top end will likely be a steak for people who want something other than seafood.

In addition to raw oysters, the restaurant will offer shrimp, mussels, and clams. “We’ll have a seafood tower that will showcase everything, including some lobster.” He said they will rotate fish depending on what they can get fresh from the gulf. There will be shrimp dishes and pasta, as well as a burger. “Fish and Chips will be a staple.” In addition to being available raw, they will offer baked oysters, Oyster Rockefeller, and fried oysters. They will also have grilled oysters with garlic butter. If you want to be a bit more adventurous, they’ll also have caviar and octopus.

The restaurant will have a full bar and will focus on martinis to pair with the seafood. They will also offer a somewhat larger wine selection than offered at their other restaurants, focusing on whites and bubbly wine for pairing. Ten taps will be dedicated to beer, including lagers, pilsners and a couple of IPAs. Two taps will be dedicated to wine, including one for prosecco.

The restaurant will open with limited hours, five days a week. They will be open for dinner service only from 4:00 pm to 10:00 pm Wednesday through Sunday. Reservations may be made through Resy, though they will try to work with walk-ins. The plan is that once all is running well, they will expand hours. They may initially add brunch on the weekend and then lunch as they feel ready.

The planned start time is February 23. They are mostly ready but are waiting for back-ordered glassware and plates. Additionally, some staff are obligated until after Valentines. They have a capacity of about 70 inside and over 20 outside and hope to have all seats filled in time for festival season. They hope to offer a high-energy, fun, informal experience in a nice environment.