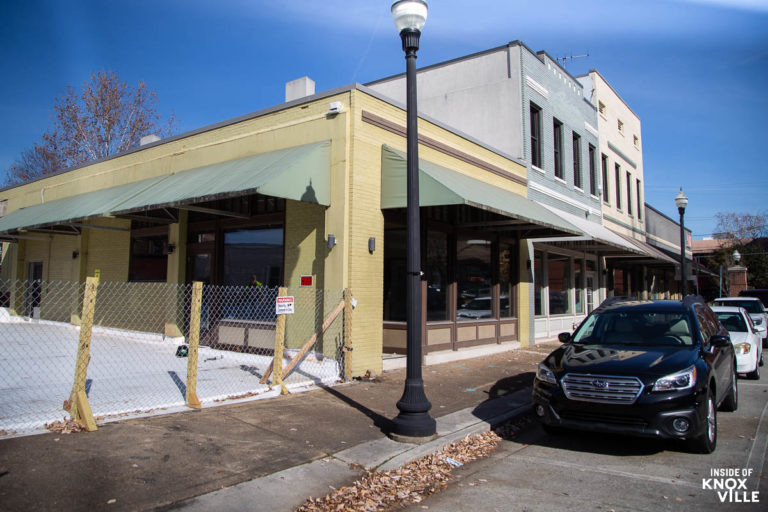 Remember back in those halcyon days before the pandemic. It was July of 2019 when last I wrote about Emory Place. Tim Hill had owned the buildings on the west side of Emory Place for a number of years and had plans for redevelopment. The link above shows extensive photographs of the interior of the buildings, including the massive basement that runs under them, and gives a brief history of the spot. Those plans were diverted when Tim agreed to sell the buildings to Break Emory, LLC, a corporation headed by Ilana Brodt and family, including Avi Zanetti and Orel Brodt.

23 Emory (the lone grey building) is the westernmost building purchased by the LLC. That building will become an art gallery, Lilienthal Art Gallery, featuring works by Iliana (whose professional name is Iliana Lilienthal) and artists she represents, as well as selected local artists (there will be a call for artists at a later date). The address was previously home to A-1 Lab Arts.

The gallery is set to launch in March 2022 and will include a space below (which has light from the rear and from skylights) to be utilized for classes designed to move artists to higher levels of accomplishment. Iliana will have her studio in the space alongside space dedicated to artists working and critiquing and growing their art.

Iliana is an artist who has presented exhibitions around the world and wants to integrate her work and experience into the local art scene. The upstairs gallery is about 2,000 square feet and the studio space below totals about 4,000 square feet. There is also a space adjacent to the planed gallery which they hope to convert to an outdoor sculpture garden.

Orel, who gave me a tour of the buildings and talked about the plans, said the group recognizes there is a large amount of artistic talent in the city and they wish to help make Emory Place a focal point of that art. They would like to see the buildings house all manner of artists, whether it be painters, sculptors, musicians, interior design, photographers and others.

17 Emory Place is a 3,000 square foot building, with 1,500 on each level. The upstairs level could be residential or business and has been built out as an apartment. This space is ready to lease and Orel said that, ideally, they would like to see one tenant take both levels.

Between that building and the longer row of four buildings is a roof to the basement which the group plans to develop into “an outdoor garden with metal black gates,” which she described as “very French.” They see the garden being used for outdoor space for a restaurant at 13 Emory Place. There is also a possibility of a rooftop feature to 13 Emory Place.

13, 11, and 9 Emory Place are not built out, but construction has been give a green-light and will begin right away. Basic shells will be installed in each space and final build-out will be tailored to tenant needs. If a particular space were leased in the near term, that space could be built out sooner, but the current plans call for the three to be ready in a year. Each of the three addresses includes about 2,000 square feet.

The group would like to see Emory Place become a destination for local art, food, music and more. They want it to have local creativity at its core and they have declined interest from chain stores. They also love the synergy with Crafty Bastard, which is located on the other side of the square, and will not consider hosting a competing brewery. They want it to become a place where, “go see art, maybe hear a concert, grab a beer, have dinner and make it more of a destination.”

There are also spaces above each of 11 and 9 Emory Place that will likely be apartments, but could be office space. The group also purchased 3 Emory Place which will continue to be occupied by Nashville Office Interiors.

There is also about 6,000 square feet below these buildings which could be performance space for occupants above, for example a theatre group or other performance groups. The 15,000 square feet in the basement, while below grade from the front is above grade in the back and windows will be added to that side of the building. With concrete between the upper floors and the basement, it would be soundproof enough for something like a disco with access from the rear alley. The space could be divided.

The facades should remain largely the same, as they are historic buildings. That said, small repairs will be made and the front will be given a more unified look with white brick and black awnings, so it has a unified look.

If you are interested in pursuing any of these properties, call Orel at 865-321-0670. She said if you have a creative idea, they would love to work with you.