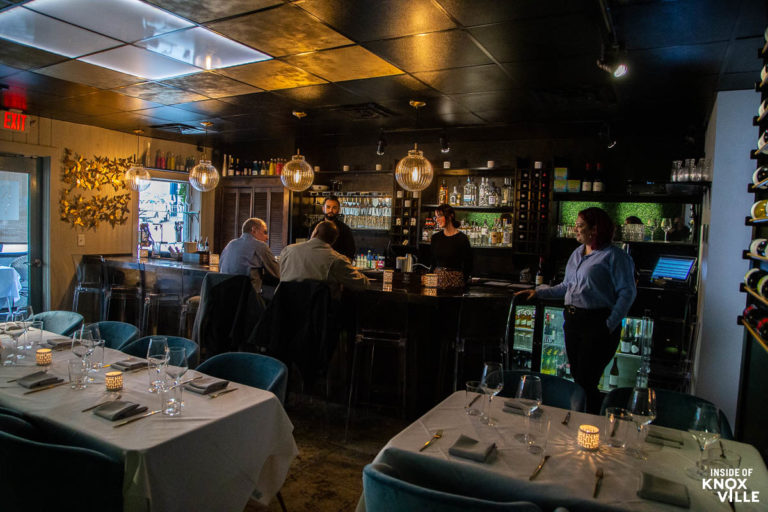 Koyo has opened at 416 Clinch Avenue (former location of Kaizen), beside the French Market Crêperie. A project of the same people who bring you Nama, Wicked Chicken, and Harvest, the Facebook page promises an “Elevated Japanese “Chef’s Choice” Dining Experience.” I stopped in to see what’s up. I met with Geoff Kenney, Corporate Chef for the company, and Josh Davis, Executive Chef for the restaurant.

Geoff said the restaurant will have a relatively small menu, both to deal with the small kitchen, but also to “keep things fresh.” The menu will be rotated seasonally, based on foods that are available. The fall menu begins, for example, without the mussels they had planned, because they are not available.

The restaurant space was leased in May and the concept was already under development. Geoff said, “Like everyone else, we’ve been short staffed, so that pushed us back a little bit.” Elijah Darden, who has been on a beach somewhere getting married over the last few days, will be the General Manager. The concept is “Japanese fusion and high-end small plates. We’ll also have a tasting menu, which will be around four courses and sometimes will change daily. It will focus on the freshest ingredients we can get in that day. Small plates will also change seasonally.

Josh said he grew up in a military family and so moved around a lot, but he landed in Knoxville, where his father’s family was located, at age eight. He always enjoyed cooking and his first job was washing dishes at a Ruby Tuesday. He attended the California Culinary Academy in San Francisco. He said what attracted him about the Academy was the fact that they had an acclaim for teaching a range of cuisines.

He’s now been in the industry for about twenty years. “I went from dishwasher to line cook. I cooked at Think Tank. I was the kitchen manager at Urban Bar and Grill. I moved from there to Nama and I’ve worked there for eight years.” He started as a prep cook, moved to a sushi chef, helped open a location in Nashville as Kitchen Manager. He then worked as a corporate chef with the company before becoming Executive Chef at Koyo.

“I’m not Japanese, obviously, but I respect the way they use ingredients.” He sees some similarity with southern U.S. cooking in that much of it started as “peasant food,” or food for people without much money. “I enjoy taking some of their techniques and ingredients and combine that with a more Appalachian style or sometimes I’ll through some French techniques in there.” He enjoys the blend of cuisines and cultures, while maintaining a respect for each.

“We’re not going to have sushi. I might have some sashimi. This is going to be geared more to the cooked or hot side of Japanese culture. We’re using a lot of different doshis, seaweed soup stock, and more. The menu will feature Japanese A-5 Wagyu beef and they hope to have that as a staple on each season’s menu. The lunch menu will be smaller, and they are focused on serving good food quickly for those who have limited time for lunch. They will have a soup, salads, and fried rice.

You’ll find the outdoor seating so many of us have enjoyed at this location and white tablecloths are to be found both inside and out. Service will be elevated, but the menu will offer a range of price points and it will be tailored to the experience the customer wants to have. They will offer a curated list of Japanese and American whiskeys, sakes, wine, domestic and Japanese beers. Geoff said, “Due to the size of the space, it will be a selected list of things we think are excellent.” He said the beverages were chosen with menu pairings in mind.

The website is being built out and will soon have a menu. Reservations are not currently offered but will soon be available.

They opened quietly last night and are offering dinner service only this week. Starting next week, they will begin regular hours for dining, which are Tuesday through Saturday 11:00 am to 3:00 pm for lunch, and 5:00 pm to 10:00 pm for dinner. The bar will be open at 4:00 pm each day.