A Glimpse of Reality Under the Bridge 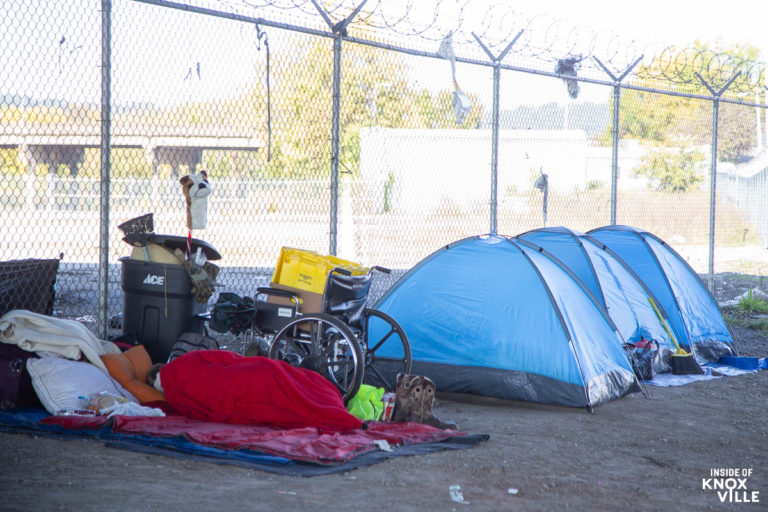 With the closure of the Broadway viaduct, the area under the I-40 overpass across Broadway has become a near dead-end, a no-man’s land. The enclosure funded by the city, intended to be a safe space, is anything but that. The few cars that trickle through have a purpose for entering and, for many, the purpose isn’t good. Drug dealing is open. The sounds of laughter and screams blend. Passive expressions mingle with smiles and threats. The smell of urine, vomit, and diarrhea hang heavy in the air and are barely noted, simply a part of the tableau.

On a recent weekend morning I walked through with Marti Baker. I offered to drive us there in my car, but she said it would be better if we rode in hers because her vehicle would be recognized. And it was. They greeted her and talked openly as we walked around. She invited them to come to Care Cuts and many said they would do so.

We started at a small camp on Cooper Street. With probably a dozen people, the camp had been destroyed a day earlier, but a church group had delivered tents and the camp had been restored. Residents talked of medical needs and plans to get housing. Plans for housing were deferred for months while working through the paperwork and waiting for openings.

We spoke to several people who needed to be in a hospital but couldn’t or wouldn’t make it happen. I was told of one woman who was admitted and had to have ten layers of clothes cut off. Often, they are discharged from the hospital with only “paper” clothing. They are discharged with medication they cannot remember to take, given appointments they cannot remember to keep, and encouraged to do follow-up they are incapable of completing.

Driving to Broadway, we found it lined on both sides with all manner of desperate humanity. Some in self-made shelters, some passed out, others volatile and angry. I leaned out the window and took one of the photographs you see here. A man yelled at me to stop taking photographs. We stopped under the bridge at the spot the city has encouraged the homeless to gather. On weekdays there are social workers offering appointments to get help — to people who can’t name the current day of the week.

We were guided around by a security guard from a private company contracted by the city. He didn’t have a gun and there was little outward sign designating what he was doing. But everyone knew and they seemed to trust him. He was as easy to spot as the drug dealers working the crowd. They were a bit aloof, dressed in black, periodically approached. No one interrupted their business. The guard explained that virtually everyone was sick and nearly anyone could be arrested.

He suggested the problem is overwhelmingly addiction driven. Marty said it becomes hard to separate the drugs from the mental illness. He pointed out two women who recently tested positive for HIV. One gave it to the other’s husband, who gave it to her. Now they are both on the street and trying to survive together. A woman was braiding hair and he said she does so every day. Marty invited her to come do hair at Care Cuts.

A common water spigot provides the only water to the site and is where clothes are washed, and baths are taken. Exposure was not uncommon. While we were there, clothes were being distributed by a group that comes each week, old clothes were discarded and new ones put on, all within sight of everyone else. A woman in a bra and spandex shorts confronted every car that entered, screaming, and acting as if she would attack them for reasons only resonating inside her mind. A man near us suddenly projectile vomited.

A woman who goes by the name Na Na spoke to us from her wheelchair, crying softly and asking for help. She has housing but returns to the spot to find the drugs she needs. According to Marti, she has been homeless or part of the culture for decades, miraculously still alive. A few feet from her a father and son sat together, unaware of their surroundings, both homeless. The guard told me there are often parents with their adult children, drug addicted and in entangled relationships. We saw others tying off, preparing to inject.

Across the street is Ray’s Market and Deli. The deli is alleged to be the site of drug dealing and paraphernalia distribution. Goods are purportedly offered for elicit services. The owners have installed a garage door on the front to protect the space at night. Drinks are sold at exorbitant prices, resulting in a black market in soft drinks, in addition to the alcohol and drugs available under the overpass.

Two portable toilets are in place on the small tract. The smell traveled for yards in every direction. Filled with diarrhea and other bodily fluids, they are to be cleaned three times a week, but I was told that doesn’t always happen. They are used for sex and for shooting up.

The biggest surprise for me was the fact that so many people under the bridge that day were not homeless. Some were there to take advantage of the homeless population, but many returned after they found housing. For some it appeared to be the availability of drugs and their continuing addiction that brought them there. For others, they returned to sell drugs. Or themselves. Some simply didn’t seem capable of visualizing an alternative to spending the daylight hours with the sound of the traffic overhead amid the presence of so much broken humanity.

If there was a ray of light that emerged from the time we spent under the bridge, it was a man named Andrew. Marti talked to him as we walked through. He came to Care Cuts the next day and asked for help. He needed detox from Heroin and long-term treatment. There were no beds in Knoxville.

She was able to find him a facility in Cookeville and the board of Care Cuts agreed to pay for his transportation there. The facility requires that they have their own hygiene products and five changes of clothes. Care Cuts gave him this and a suitcase to put them in. And off he went to Cookeville.

As I sat down to write this article, I learned from another downtown resident Helen Ross McNabb will conduct an information session at the Mill and Mine next Wednesday morning, November 3, from 9:00 am to 10:00 am. Entitled, “Community Mental Health Introduction for Downtown Stakeholders,” the intent is to “provide some tips on how best to interact with some of our neighbors struggling with mental illness and substance misuse.” An RSVP is requested and all the information may be found here. Questions/Topics are requested in advance.