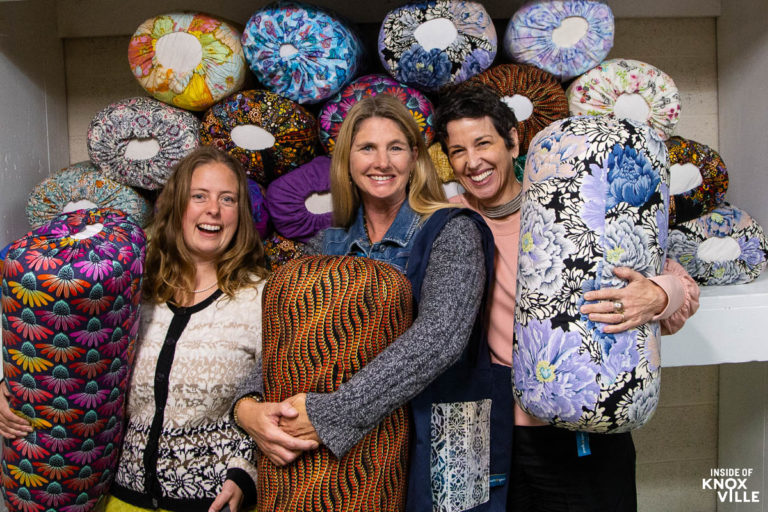 Located beneath Marc Nelson Denim and tucked away just behind Olde Virden’s Artisanal Food Market is Inner Space Yoga. It’s not the yoga studio you might expect from the name, but rather the manufacturing and shipping location for a fast-growing line of high-grade yoga products. I stopped in to learn the story of the company and the women behind it, meeting with co-owners Tammy Kaousias, Jill Frere, and Rebecca Simmons.

Tammy Kaousias, an area lawyer, has lived in Knoxville for decades and graduated from UT Law School in 1992. She continues her practice as her primary work, but as she said, “Once yoga gets in your blood, you’re done. It’s definitely more than a pastime.”

She learned about the business when she owned Glowing Body Yoga and was planning a yoga teacher training class. The person she had hired to execute the program used a large number of yoga props for classes, particularly for restorative yoga. The props “help yoga practitioners access postures more efficiently . . .” Looking for bolsters she found an Asheville company through a series of recommendations. She met the owner, fell in love with the products, and made a large purchase.

“I became an advocate and an active fan, which is what happens with these products. You start loving the bolsters. And we make the best meditation cushion made. We’re, in my opinion, the top of the class in every single segment we are in. Every product we make is the very best you can find for its purpose.”

In 2014 the owner of the business decided to sell as she moved on to other things, and Tammy purchased the company and moved the sewing and production to Knoxville. The company has a proprietary hand-rolled cotton batting process which is completed in Morristown. Sewing of the fabrics also happens locally and the final product is constructed at their current site at 700 E. Depot Avenue.

She began to sense she could not do it all on her own. Her ambitions for the company needed, “new energy to propel it and get a trajectory going and I wasn’t really able to implement it.” That’s where Jill Frere and Rebecca Simmons, each also experienced yoga practitioners and teachers, entered the picture.

Jill Frere is from Knoxville and attended NYU for dance, living in New York City for ten years dancing professionally. She casually began yoga classes, but began practice with Dharma Mittra, realizing immediately it would be a major part of her life going forward, and eventually obtained his 1,000-hour certification.

She returned to Knoxville about a decade ago, dancing professionally and teaching yoga, including at Glowing Body, where she met Tammy. When the pandemic hit and studios began closing, Tammy offered her the opportunity to work at Inner Space making bolsters and other products. “What I had never anticipated was being treated so well. Tammy gave me the great kindness of always asking my opinion . . . After a year of being respected, I realized I have a knack for this.”

She said dance to her had always meant creative expression, but as much as anything, she wanted to “shift the culture and work with artists who were making an impact on people’s impact of their lives.” She began to realize that the products they make were changing people’s lives as evidenced by what they hear from their customers. “I realized there is this other way to shift the culture than I had ever considered.” When Tammy began conversation about joint ownership, she was ready and excited for the challenge.

Tammy said, “It’s been very powerful and collaborative. Their energy has made business explode. There’s something to be said about not having hierarchies, something to be said about collaborative approaches on problem solving.” She said they each bring different perspectives to the business along with the commonalities of both loving yoga and loving the products they are producing.

Rebecca Simmons has lived in Knoxville for seventeen years but is originally from Atlanta. When her husband was in graduate school, they joined a gym and she discovered an Iyengar yoga class, fell in love with it, and began study. The practice makes heavy use of props. When she arrived in Knoxville there was no one teaching the practice, so she continued to travel to Atlanta to further her training.

She met Tammy at Glowing Body when she had a teacher training program that included an Iyengar practitioner.  She attended a 200-hour program at Glowing body and became a certified teacher. Using the bolsters that Tammy had purchased, she fell in love with the quality of the product. As a mother of four children, yoga has been her primary outlet. She taught a range of classes at Glowing Body and has a private studio at her home where she provides instruction.

When the opportunity of being a co-owner of Inner Spaces became possible, she felt it was a culmination of her journey to this point. Her youngest was starting school and she’s happy to have something the opportunity. She uses her journalism background to write press releases, blog posts, social media posts, and more.

Her connection to the business came one morning when Jill came to Rebecca’s home to practice together. Inside her home studio, surrounded by Inner Space products, Jill told her she had this opportunity, but wanted someone to do it with her. Rebecca said, they never got around to yoga that day, but began making business plans. Soon, the three became co-owners of the business.

Tammy said Jill brings a great ability to analyze inventory, pricing and more via spread sheets. “She came on board and organized manufacturing at a level that helped me be able to look at things in a snapshot easier and know where things are.” She said knowing the flow of orders, materials, and shipping are very different than the issues faced by a service industry. That lead Tammy to realize Jill would be a logical partner.

The pandemic has delivered a range of impacts on the business. It expedited the shift to retail as retail demand increased and wholesale decreased with the closure of yoga studios. They’ve also experienced some of the difficulties in the supply chain, but they’ve been able to shift to other providers and continue to roll.

In addition to the flat, round, and oval bolsters, they offer eye pillows (some scented), totes, and zabutons and zafu mediation mats. They come in a wide range of patterns specifically selected for the items, all of which are assembled by hand. The eye pillows are made from material that has to be cut from the other items and they found the use as a part of their goal of having a 100% upcycle in their production and being a zero waste company.

They are working toward a national marketing plan and new retail structures as they move toward retail from wholesale. They are also developing products, an example of which is the totes that they introduced just this week. All the products are available for purchase online via their website, and you can find those here. They are also marketing to resorts and retreat centers. Most of their sales to this point are along the eastern seaboard, but they are seeing more sales on the west coast.

They will hold an Open House on First Friday, November 5 and they would love for you to come see their products and meet the team in person. You will be able to purchase directly from the store that night. 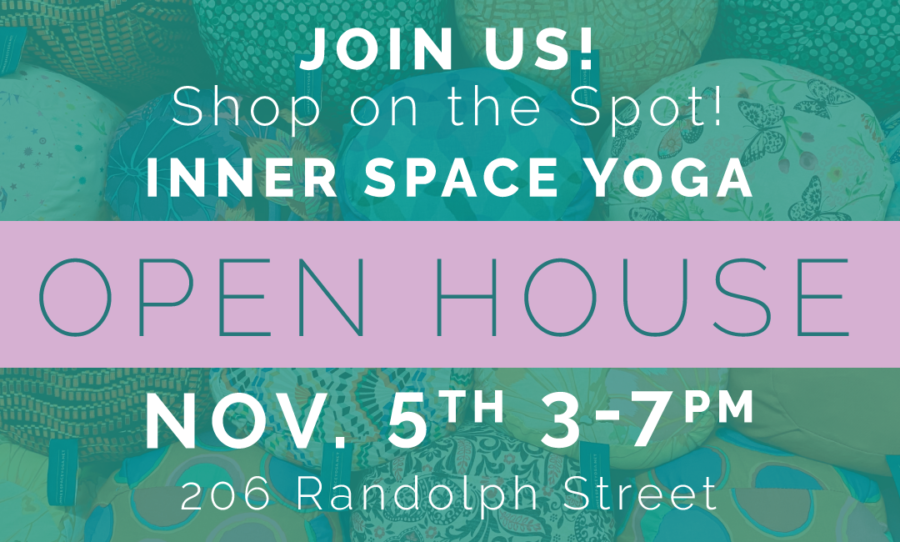