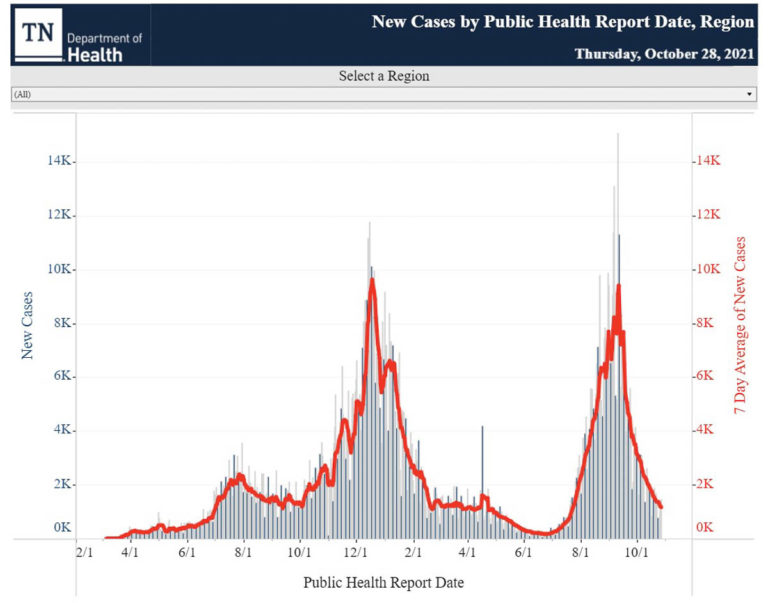 This will be my final COVID-19 update — until and unless we hit a new surge. I am hoping to avoid the topic until at least the beginning of 2022. I do plan to publish the monthly charts next week to include October and give us a graphic representation of where we’ve been and where we are.

Of avoiding another surge, I am not optimistic. Many European countries are now seeing a large surge even though some of their vaccination rates are better than our own. New vaccinations have slowed dramatically in the U.S. and have nearly stopped at the state and local level. Short of mandates we aren’t likely to improve our rates significantly and that leaves us vulnerable.

But for now, case and death rates are dropping in the country, state, and county, so there is much to be thankful for. This may be the flow of life for a while.

As noted last week and mentioned above, cases and deaths are once again rising globally. Largely driven by increases in European countries, international cases increased by 3% over last week, and deaths increased by 5%.

Almost 247 million cases of COVID-19 have been confirmed since the beginning of the pandemic, along with 4,999,720 deaths from the virus. Before I finish this article over 5 million people will have died of the disease. Almost 18.2 million cases are currently active, up almost 300,000 from last week. Just under 3 million new cases were added this week, as well as 49,343 deaths.

Twenty-one countries have fully vaccinated 70% or more of their population, the same number as last week. An additional twenty-one countries have fully vaccinated at least 60% of their population. The top five countries in the world for full vaccination rates are Gibraltar (99%), U.A.E. (88%), Portugal (86%), Malta (85%), and the Cayman Islands (83%). The U.S. (58%) ranks 52nd among countries for full vaccination rates.

Ten countries, mostly in Africa, have fully vaccinated fewer than 1% of their citizens. This number is down from 3 a week ago. The countries in the world with the lowest vaccination rates all have rates .3% or lower and include (from the lowest) Burundi, Congo, Yemen, Haiti, and Chad. Efforts are underway to vaccinate African countries, as illustrated by the case of the Central African Republic which had fewer than .3% fully vaccinated last week, but 6% have now met that threshold.

Almost 46.7 million cases of COVID-19 have been confirmed in the U.S. since the beginning of the pandemic, along with 763,784 deaths from the virus. The U.S. continues to lead the world in total cases and deaths. Among countries with at least 1 million citizens, the U.S. is eighth in per capita cases, dropping a spot since last week. The U.S. remains thirteenth in per capita deaths.

The U.S. is averaging 1,191 deaths per day, down from 1,509 per day a week ago. Hospitalizations have fallen by 18% in the last two weeks. The states seeing the highest current rate of death from the virus include (from the top) West Virginia, Montana, Idaho, North Dakota, and Kansas. The states with the lowest current death rates include New Hampshire, Rhode Island, Nebraska, Hawaii, and Connecticut.

The states with the highest rate of increase in virus cases this week are, in order, Alaska, Montana, Wyoming, North Dakota, and Idaho. That said, even these states are seeing a decline in cases, including Montana, where cases were still infection rates were still rising a week ago.  In order, these states rank 32nd, 36th, 48th, 45th, and 49th in full vaccination rates, for an average of 42nd.

The state of Tennessee has reported 1,279,112 cases of COVID-19 during the pandemic. The state is second behind North Dakota in per capita cases. The state added 8,236 cases in the last week, down by about 1,500 from the previous week. The current daily average of 1,177 new cases per day is down from 1,425 a week ago. The rate of spread in the state is 14th lowest in the country, with a 42% decline in new cases over the last two weeks.

16,322 Tennesseans have died of COVID-19, including 218 this week, a decline from 335 reported last week. The state is averaging 31 deaths per day, down from 48 a week ago. Tennessee ranks 22nd in per capita COVID-19 deaths since the beginning of the pandemic.

The pace of testing is holding steady at a low rate, while the positive test declined slightly this week. The current average positive test rate is 12.42%, down from 12.45% a week ago. Tennessee dropped this week from 39th to 40th in per capita testing among the states (and D.C.).

140.3 thousand Tennesseans got a vaccination over the last seven days, up from 89 thousand last week. That is the good news. The bad news is that the vast majority (107.9K) of those were booster shots. Our first shot rate moved up only from 53.7% to 54.2% over the last week and the full vaccination rate rose only from 48.1% to 48.5%. The state dropped this week from 42nd in state vaccination rate comparisons to 43rd, being surpassed by Arkansas.

Today, the KCHD is reporting 68 newly confirmed cases and 37 probable cases. Active cases now number 1,141, a drop from 1,398 a week ago. Other than yesterday when the number was 1,055, it is the lowest number of active cases reported in the county since July 28 (721).

COVID-19 hospitalizations continue to decline, with the 19-hospital region reporting 239 current hospitalizations from the virus, with 68 in area ICUs, and 47 on ventilators. A week ago, those numbers were 288, 83, and 56, respectively. 31 ICU beds are currently available in the region, up from 19 a week ago.

East Tennessee Children’s Hospital did not report this week and may have discontinued their dashboard due to low numbers.

Test demand continues to drop, with less than 4,500 tests reported over the last seven days. The positive test rate of 8.5% for the week reflects a significant drop from 12.4% last week. Turnaround time for results is just under 1.4 days.

The pace of vaccinations nearly doubled in the county this week with 11,456 shots given this week, up from 6,815 last week. This includes booster shots and, given the state numbers above, I’m assuming most of these shots were boosters. First and second vaccination rates remain stagnant, with 54.05% of Knox County residents fully vaccinated (up from 53.62% last week) and 57.98% having had at least one shot (up from 57.64% a week ago).

The Knox County Schools are reporting 70 active cases this week, nearly identical to the 72 they reported a week ago. The University of Tennessee is reporting 35 active cases, up from 26 a week ago.