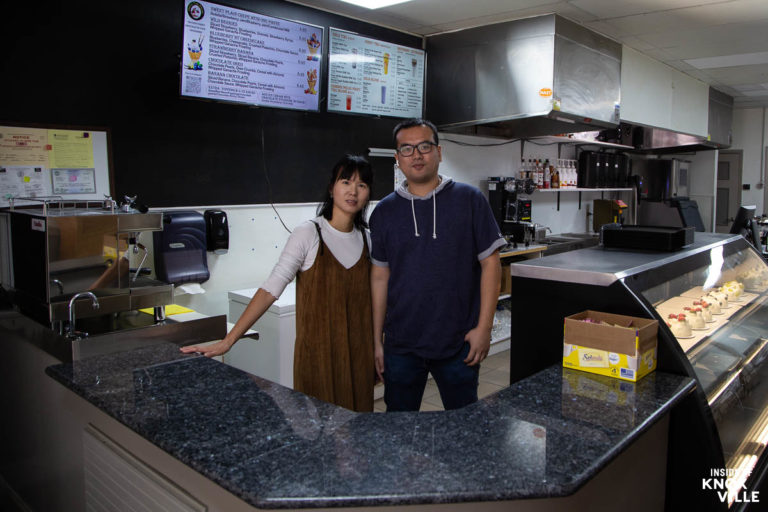 A new business has opened at 722 South Gay Street in the former location of Frussies. Hello Tea House is owned and operated by husband and wife team Eten Dong and Echo Liang.

They were each born in southeast China, but have been in the U.S. for ten years. Ironically, though they were from the same part of China, they met in New York City where his family moved when he was twenty and where she moved to study International Business at Queens College. She laughed and said it must be fate because they would never have met in China.

They married in New York and moved to Knoxville five years ago and welcomed two children to the family. His family also moved here and opened Chef’s Asian Cuisine in Hardin Valley. Both Eten and Echo worked at the restaurant, she when she could do so around the children’s schedule.

Of opening the Tea House, Echo said, “It’s kind of a bold move for us.” She said it started during the pandemic. She stayed home with the children for a year and the couple realized, “We want to do something for ourselves.” She said she had been baking for the children and the whole family loves bubble tea and felt its popularity in China could be translated to Knoxville.

With that thought in mind, she was attending ESL classes and activities at UT on Saturdays. “One day, because it was nearby, I passed by here and saw this location.” She thought it looked like a good spot for their growing dreams and the couple took the lease last summer, but it took until the end of September to get everything, including product in place.

She said customer traffic has been slower than they had hoped, but the customers who have visited and gotten tea or other menu items, have returned. She said in two weeks they already have regulars. They’ve been surprised that not as much traffic has come from the office towers, though they realize some of the workers have not returned. They hope to reach UT students.

The shop is focusing on trends that are popular in China and in New York City. “When I was in my country, we loved it. We drank it almost every day. My kids love it, too.” She said some people seem to know what bubble tea is while other have no idea (Ed. Fun Fact: Bubble tea first came to downtown in 2008 when Jamie Johnson opened Knoxville Pearl, a cereal bar featuring bubble tea. She closed the store in 2016.)

They have added to their food menu over the last week, with the addition of crepes, which are formed into a conical shape similar to a ice cream cone and then wrapped in paper. She said the ingredients can be eaten out of the top with a fork and you stroll down the sidewalk. Emphasizing they use fresh fruits in everything they make, they currently offer six types of sweet crepes, all of which are her recipes, though she said that style for crepes is popular in New York.

Also available are “bomb cakes.” She described them as very light. I bought one and took it home and she was right. The delicious cakes are light, with fruit inside and out, as well as a hidden cream filling. It brought raves at my homestead.

The drinks include not only bubble tea, but a line of milk teas and fruit teas, all with fresh fruits and no powder mixes like some places use.. There are also slush drinks, including something I will have to try in order to understand: Cheese Foam Fruit Tea Slush. Also offered are espresso drinks including Latte, Mocha, American, Caramel Macchiato, and Cappuccino. She pointed out that each coffee drink starts with grinding fresh beans. The sweet drinks also come with your choice of sweet levels, from 0% to 120%.

She knows they are facing headwinds as winter approaches and the pandemic drags on. They don’t have much of an answer for the pandemic, but a number of their drinks are served warm or hot and perfect for a cold winter day.

Special lighting and a sign are on the way, but they are ready to share their cool wares with the city. Their hours are current 10:00 am to 6:00 pm weekdays and 11:00 am to 7:00 pm on Saturdays. Echo said their hours right now are being dictated by taking care of their children. “We try to balance our life and our business.”

You can find them on Instagram. Give them a follow and please support this nice couple and their new business.