We’ve all enjoyed his work for years in and around downtown, as well as out west. Curtis Glover has painted murals for Jerry’s ArtaRama in Bearden and numerous murals around downtown including one I mentioned in the mural article a couple of weeks ago. He has several recent ones you may not have seen, including one inside Fat Tuesday and a massive one on the Radius Rooftop Lounge, both completed during the pandemic. I finally caught up with Curtis after a year or so of trying to schedule it and took a deep dive into how he became one of Knoxville’s most prominent muralists.

As we sat down for coffee, he started rattling off walls that he’d like to paint in the downtown area. He’s as driven as ever to cover every blank space with work. And he’s doing it. Part of the reason we took a year to get together was that he is covered up in work and hasn’t had much of a break. Even during a pandemic. “People are still spending money on artwork.” 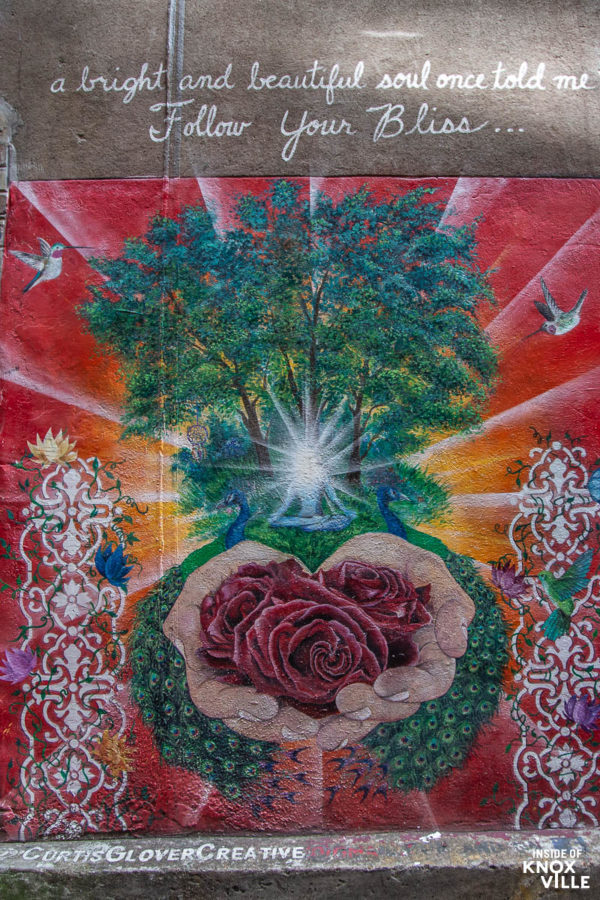 Curtis’ dad was in the banking industry and, as a result, the family moved around. He was born in Charlotte, North Carolina and lived in various cities around the country, with most of his formative years coming in Dallas and Houston, Texas. His mother is from Maryville and his parents met at Tennessee Tech. Graduate work brought his father to the University of Tennessee. His mother now lives in Farragut and a dozen years ago, he moved to town after finishing college at UNC Asheville.

In college he studied Mass Communication, but he attended on a baseball scholarship. He attributes his hustle in marketing his art to that drive to succeed in sports. “I grew up competitive by nature. I just apply that now to the arts.” He has always drawn and he and his buddies in middle school and high school would draw comics. He illustrated book reports. But he loved sports.

He attended Richland Junior College in Texas and in his freshman year they won a championship and he won MVP honors. He left after that year, ready to get out of Texas, for the chance to play in Ashville. He studied Multimedia Arts and Sciences, their name for graphic arts. He switched majors to Mass Communication and never published an article but began designing and selling ads. He designed t-shirts and was graphics coordinator for a sports show.

His junior year he became the “ace of the staff,” and opened against Georgia. That year his elbow gave out and he had surgery, ending his sports career. He continued drawing and graduated in Mass Communication. He kept the design minor and tried to get design jobs when he got out of school. The housing crisis had begun, and he had no luck, confessing now that his portfolio wasn’t that great. He moved to Knoxville and began working in restaurants.

After about a year he went to work at Crown and Goose in the Old City, and that move he credits with getting him started because out of it came the mural behind the stage at Boyd’s Jig and Reel. He said one of the good things about a job like that is all the people you meet, which sometimes led to connections. “Knoxville is two degrees of separation, for better or worse.”

He painted the Koi mural at Jerry’s Artarama. He had continued to paint and was a customer there and they got to know him. That relationship led to the mural. The mural increased his profile and led to other projects. He loves that it is in the arts district and all the other artists see his work every time they buy paint.

He left the Crown and Goose and worked for a faux-finishing and cabinet company, then quit that job. He worked in Strong Alley and painted the rose hands with the quote (which is still there and pictured here). Brent Thompson saw him working and asked if he’d be interested in participating with other artists (Bobbie Crews designed and led the effort) in painting the tourism mural on the side of the Visitor Center, which led to his involvement with that project.

I asked when he made the shift to full-time art and was surprised when he immediately answered, “December 19, 2015.” He was working at the District Gallery in Bearden doing custom framing, installation, and other projects. He said he did for the Haslams, Blackberry Farm, and others. On that day in 2015, his father was in the hospital in Texas, he was working hard to have a few days off to spend time with family when a rush of projects came in. He quit.

During that time, he was contacted by a woman he had met in the gallery. Her son was opening a concept called “First Watch.” He was asked to paint a mural at the First Watch on Bearden Hill. He said he was glad to be on his own, but also nervous. He worked on the mural for two days and made what it would have taken him two months or more to make at the gallery. He knew then he’d done the right thing and that he’d never work for anyone other than himself again.

His father died two weeks after quitting his gallery job and he knew it was time to make his way and make it work. “I went for it.” He wishes his father, who always worried about him financially, could have seen his success. He took massive amounts of work for the first two years, got his name out there, and then began understanding the kinds of projects he really wanted. He did seven projects for the First Watch group, and saw his career take shape.

He said the Boyd Family has been instrumental, as well. He did the woman on the outside of the Jig and Reel, as well as the stage backdrop. He does their Christmas murals ever year, including the stag they kept in the window. He’s recently completed a mural at South Knoxville Elementary honoring Knoxville women, and he has a popular mural at Beaumont Elementary, which is pictured here. The mural he painted for Embassy Suites is one of his favorites, but it is only visible from the Radius Lounge.

He said now he’s getting leads coming to him, as opposed to having to pursue jobs. He said it matters that people are seeing his work. He gets tagged on social media. He knows some people like his style and others don’t and he’s fine with that. He doesn’t have a website and prefers to have a personal conversation with people about potential projects. There are a number of projects in the works he’s excited about, some of them massive.

I asked where he wants to go with his career, he said, “I want to paint this whole damn city.”