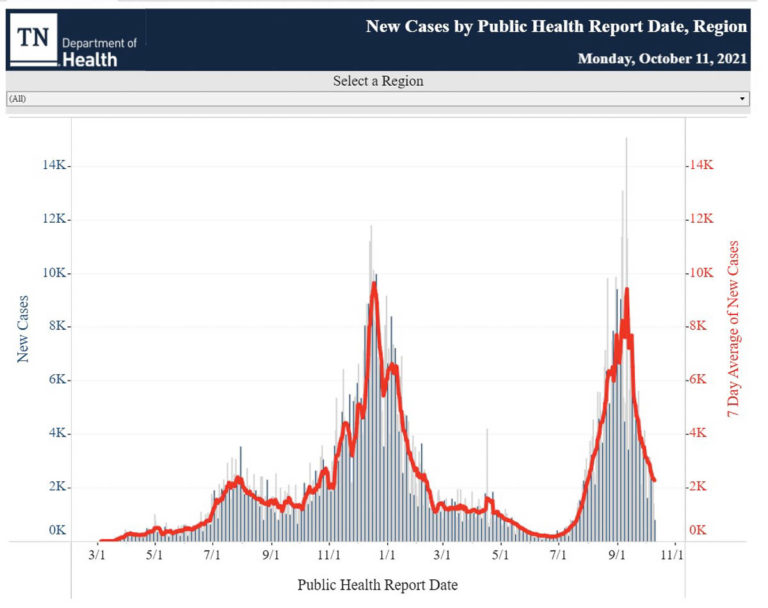 Today will be the final Tuesday update until and unless circumstances force me back to it. I’ll continue the Friday round up for at least a few more weeks. Knox County (and state, national, and international) numbers are now well below where they were when I added this second report on August 27. Cases were running close to 300 per day in the county, almost 600 COVID-positive patients were in our hospitals and there were almost 3,700 active cases.

Make no mistake: We are still in a pandemic. Spread continues and more people will die. Not enough people have taken the vaccine to prevent future surges. Yet, we are in a better place for the moment, with cases falling below 100 per day, less than 400 in the hospital, fewer than 2,000 active cases, and with each of these measures on a downward trajectory.

The state has now reported 1,253,863 cases since the beginning of the pandemic and continues to hold the distinction of having the most cases per capita among the fifty states. If Tennessee were a country, its rate of 183,604 cases per million would rank first in the world among all countries with more than one million in population. Of all the countries, Tennessee would trail only Seychelles, Montenegro, and Andorra.

In the days since the last update, the state reported 52 COVID-19 deaths on Friday, 16 on Saturday, 5 on Sunday, and 7 on Monday. The five deaths reported on Sunday is the lowest single-day death toll reported in the state since August 15 (4).

15,583 Tennessee residents have died of COVID-19 since the beginning of the pandemic. Over the last week, 260 deaths have been reported, for an average of 37 per day, down from 53 per day a week ago. The state moved up one spot to 21st in per capita deaths in the U.S.

Hospitalizations continue their rapid decline across the state, with the most recent report indicating 1,726 COVID-positive Tennesseans currently hospitalized, 558 in ICUs, and 396 on ventilators. These totals reflect drops from 2,195, 715 and 511 a week ago. There are, however, 36 current pediatric COVID-19 hospitalizations in the state, up from 34 a week ago.

After a surge in vaccinations, likely due to boosters, shots given in the state dropped this week from about 137,000 a week ago to 117,600 given in the most recent seven-day period. Of the 117,600 shots given this week, a large number were boosters. I don’t have numbers that go back a week, but just in the last four days, about 40,000 boosters have been given.

The rates of initial vaccination are still low, but continue incremental improvement, at 47.3% fully vaccinated and 53.2% with at least one shot, up from 46.7% and 52.8% a week ago. Tennessee ranks 42nd in full vaccinations among the states, up two spots from last week. Rates for all groups below age 30 remain below 40% fully vaccinated.

The most recent test positivity rate reported by the state is 9.66%, but Johns Hopkins reports a 14% positive test rate over the last week. The state remains 38th in per capita testing among the fifty states.

Since the last report, the Knox County Health Department reported 169 new COVID-19 cases on Saturday, 86 on Sunday, 34 on Monday and 52 today. The 34 new cases reported yesterday is the lowest single-day report since July 25 (26). The three consecutive days below 100 new cases is the first such run since August 4 ended a months-long string of such days. The average of 85 reflects a drop from the average of 118 for the same four days a week ago.

Since the beginning of the pandemic, 61,102 cases of COVID-19 have been confirmed in the county, and 15,757 are considered probable. Also encouraging is the continued decline in active cases, with 1,951 currently reported. This marks the lowest number of active cases since August 11 (1,819). One week ago, there were 2,476 known active cases.

The number of tests administered also continues to decline, down to around 4,000 this week from about 5,000 a week ago. The current rate of 13.7% positive tests is down from 16.4% last week and remains almost three times as high as we need. Test reporting time is now 1.25 days.

Hospitalizations have continued to decline in the 19-hospital central East Tennessee region. There are currently 374 COVID-positive patients in our regional hospitals, with 128 in ICUs and 96 on ventilators. A week ago, those numbers were 470, 147, and 109 respectively.

536,361 shots have been given in Knox County since they became available. 9,094 vaccinations were given in the county this week, compared to 12,663 the previous seven days. The county does not report the number of booster shots given, but from the excruciatingly slow incline in vaccination percentages, we can surmise they constitute a large percentage of current shots. 57.29% of Knox County residents have gotten at least one shot, and 53.05% are fully vaccinated, each number up a half percent or less over the last week.

Knox County Schools are not reporting this week, as students and staff are on fall break. The University of Tennessee is reporting 38 active cases, up from 33 a week ago.