Checking in with 214 Magnolia Gallery 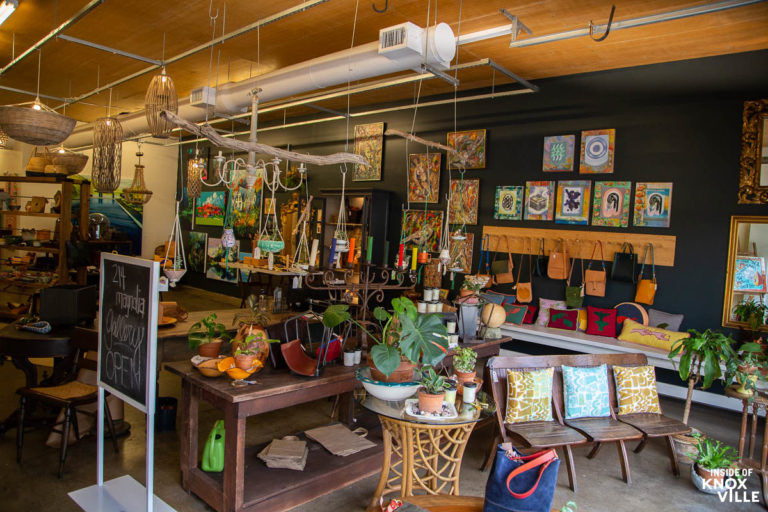 A lot has happened since Megan Stair opened 214 Magnolia Gallery (located at 214 Magnolia Avenue, beside Public House) in November 2019. Unbeknownst to most of us, a virus had begun circulating a half a world away that would impact this and every business. Businesses related to the arts were among the first to suffer. Nearly two years later, I checked in with Megan and the gallery to see how business has gone.

She had a great show planned for the festival and anticipated the great exposure to people from all over the world. Big Ears was, of course, cancelled as the pandemic swept the world. She said it was hard and she knew it was hard for others.

As the pandemic began she worked hard on social media, posting photographs of art. She changed the window display regularly “to make it fun for people, because that is something you could do: Get out and walk around.” The gallery was closed completely to customers initially. She said if a customer saw something online, they would take it to their car or deliver.

Around June of 2020, as the initial lockdown began to ease, they did popup shows in which two or three of the artists would come to the gallery, bringing additional works, and would set up on tables outside the gallery. The front gallery wall is a garage door with windows, which lifts upward opening up the space. People could shop from the street.

Response was good and they have continued the idea of popup artist shows, so that any given weekend, one or more of the artists will likely be available in the gallery to discuss and sell you their work directly. The idea of raising the front door also continued and appointments were offered. Through the winter as they resumed some regular weekend hours, they continued raising the front door to keep air circulating.

Starting in January 2021 she has featured a new artist each month. “The artists have been very prolific. It’s been good for the gallery,” keeping things fresh. She said she’s been able to shift the stock every month except on in which an artist had to cancel. “Otherwise, the whole gallery takes a shift.”

The show for the month of October is a fun sister/brother collaboration, with her brother Ryan Blair. Ryan attended Ball State where he studied art and education and is an elementary art teacher in Anderson County. He’s produced art since he was young has developed his unique style for years. She’s happy to share his art with the world. She said she has fallen more in love with his art and thinks it has really grown.

She said she considers it Appalachian in that it deals with historical and political events that have happened in the area, brings in country music and religion. One piece features a mash-up of Johnny Cash lyrics with Talking Heads lyrics. “A lot of his pieces have a huge story behind them.” She says he does research as he works and for example, she pointed to the piece referencing the Fraterville Mine, which was the site of the worst mining disaster in Tennessee history, when 216 miners died in 1902. Ryan calls it “Contemporary Appalachian Funk.”

She said First Fridays have gotten fun again with maybe 200 people through the gallery at the beginning of this month. Matt Morelock and Jessica Watson provided music and the big door stayed open. She said some people wore masks and others didn’t, as she leaves that up to customers at this point. She said she feels like she’s a part of a supportive team including the artists and she wants to keep the energy high while staying as safe as possible.

She’s continued to be open (literally, with the garage door up) only on Friday 5:00 pm to 8:00 pm and Saturday Noon to 5:00pm. She said as the holidays approach, she might expand back to her original hours which included Thursday through Sunday.