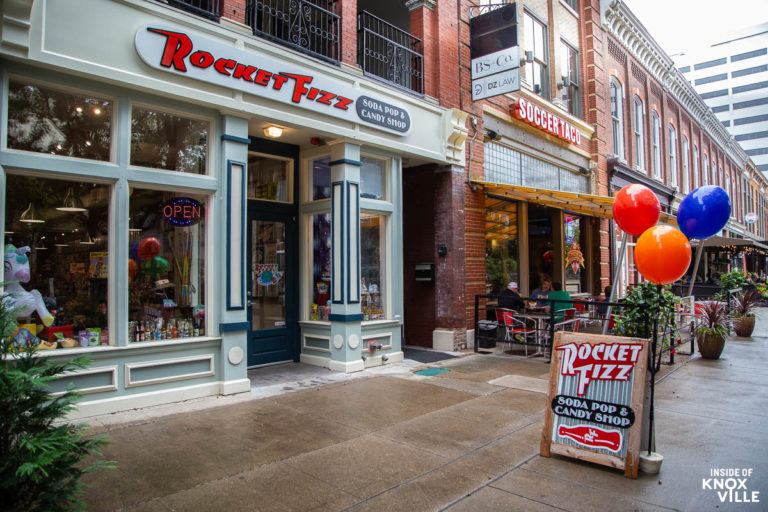 A new store, Rocket Fizz, has opened on Market Square, offering retro and international candy, retro and unique soft drinks, toys, posters and more. The franchise was founded in 2007 and opened its first store in 2009. With nearly 100 locations across the country, it lays claim to being the “fastest growing candy franchise in the world.” Locations in Nashville, Chattanooga, and Asheville preceded the Knoxville location.

For co-owner Branden Lisi, the opening marks his second location. While he lives in Atlanta, where he operates Object 9 marketing, design, and development, with the same partner, Jon Cato. They decided to open a side business a few years ago and he wanted to have something that was “just about making people happy.”

My business card title says ‘pastry inspector.’ Every time I eat a doughnut, I think of my grandpa, because every time I would go back home to Ohio, or to Florida after he retired, my grandfather would take me to get doughnuts. So, I have this real strong association. I noticed no one was ever in a bad mood in a doughnut shop. So, a couple of years ago when my partner and I were looking to add to our business holdings, we settled on a candy store and loved it. It makes people happy. It’s like a doughnut shop, but without the baker’s hours.”

In February 2019 the two opened their first location in Columbus, Georgia and he says it did very well. The two had planned on adding other locations, but he learned in June of that year that he had kidney cancer. He was on Mount Everest with his son’s scout troop when he began having symptoms and was taken by medivac to the nearest hospital. He had three surgeries, with the most recent coming in April 2021. He said after the third surgery he was determined to get back to the project.

He had traveled to Knoxville in 2018 when he brought his son to look at the University of Tennessee. In 2019 he brought his wife to east Tennessee. They went to Pigeon Forge and Gatlinburg, “but that really wasn’t our scene.” He had fallen in love with Market Square, so he suggested the two of them go to Knoxville, which they did. “We were having dinner in August 2019 at the Oliver Royale.” He said they were seated on the corner of the patio, it was a beautiful night and the square was packed. “I literally pointed at this store and said, we need to open a Rocket Fizz right here.”

The space was occupied at the time. Fast forward to earlier this year when they decided to move forward with a second location and he wanted it to be on Market Square. “I got online and I found that this address was open and I didn’t make the connection until I actually showed up and realized it was the same spot. They signed the lease in June and opened last Friday night. He said it was a great opening weekend. He said they’ve done no advertising and “forty to fifty percent” of their inventory has not arrived.

He said there are a lot of ways to make money, but making people happy is one of the best. “It’s fun for me to put the apron on watch the little kids” as they come in and are excited.

It makes me feel like I’m in some way honoring that relationship with my grandpa. I hope people find something that connects them with their past. This place is built around nostalgia. Whatever age you are, you’ll find something that takes you back. Expect to walk out happier than you walk in, whether you buy something or not.

I mentioned the chocolate and bacon soda I saw online and he said I should try that or the “ranch dressing” and the “buffalo wild wing” and combine them. “If you stand in there long enough you’re going to hear someone say, ‘Oh my God, I haven’t seen this since . . .’ That is the foundational statement.” He mentioned Goo Goo clusters, moon pies, and pecan logs which he remembers from traveling with his parents as a small child.

“We have a lot of candies from Germany, Switzerland, England, Japan, and Mexico.” He said people who have lived elsewhere and have favorite candies from those parts of the world are excited to find them here. He mentioned “violet crumbles,” which are popular in Europe, as an example. “People should expect to have a good time and find some candy or a toy that connections them with their past.”

“I love it up here. I’m a big fan of this town and the people are super nice.”