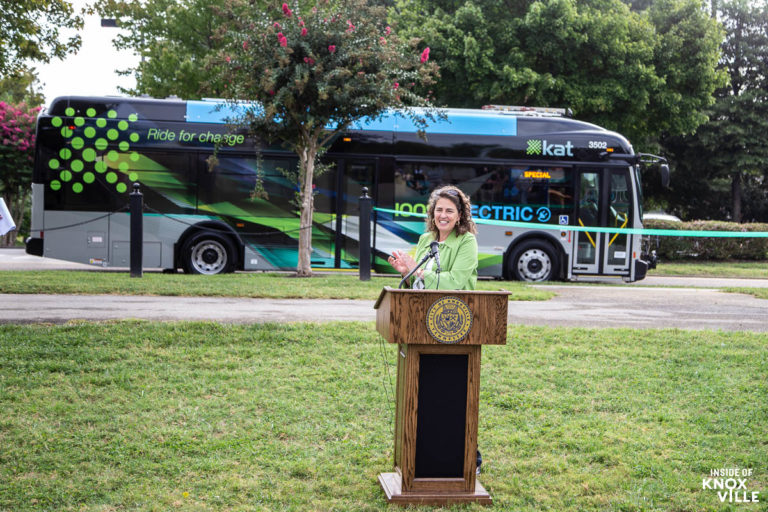 As promised earlier this year, electric buses have begun to join the fleet of buses deployed by Knoxville Area Transit. The buses were officially introduced to a small crowd on Thursday at Caswell Park. The two buses on site are two of the five to have arrived so far, of the twelve total which should be deployed by the end of the year.

Transportation is one of the largest sources of carbon emissions globally and plays a part in moving the city toward its goal of reducing carbon emissions by 80% by 2050. After receiving twelve electric buses this year, the city has six more on the way for next year, bringing the total to 18. At that time, electric buses will represent just over a quarter of the city’s fleet, with another 41% being represented by hybrid-electrics.

Mayor Kincannon said, “Today marks a dramatic milestone for Knoxville – this is a major step on our path toward a more clean and resilient future for our children and grandchildren. These high-efficiency electric buses are an investment in clean air, in healthy neighborhoods, and mobility for our residents.”

KUB also played a part in the deployment to ensure charging stations would be capable of powering as many as twenty-five buses in the coming years. The first charging stations are currently being installed for the twelve buses already ordered. Of their role, Gabriel Bolas, KUB President and CEO said, “This is an exciting day for Knoxville, and KUB is proud to be part of it. KUB supports electric vehicles in our community, and we’re proud to be a partner with the City of Knoxville in building a more sustainable future.”

Mayor Kincannon asked how many in the audience had driven to the event in an electric vehicle and many hands were raised. She arrived via city bus which, she noted was loud enough to inhibit conversation and pointed out that the electric motors are quiet. She said the city is committed both to helping expand its own electric fleet and to doing their part to make it easier for citizens to drive electric cars, by making charging stations more available. She pointed out that Caswell park is a part of that planned expansion of charging stations. 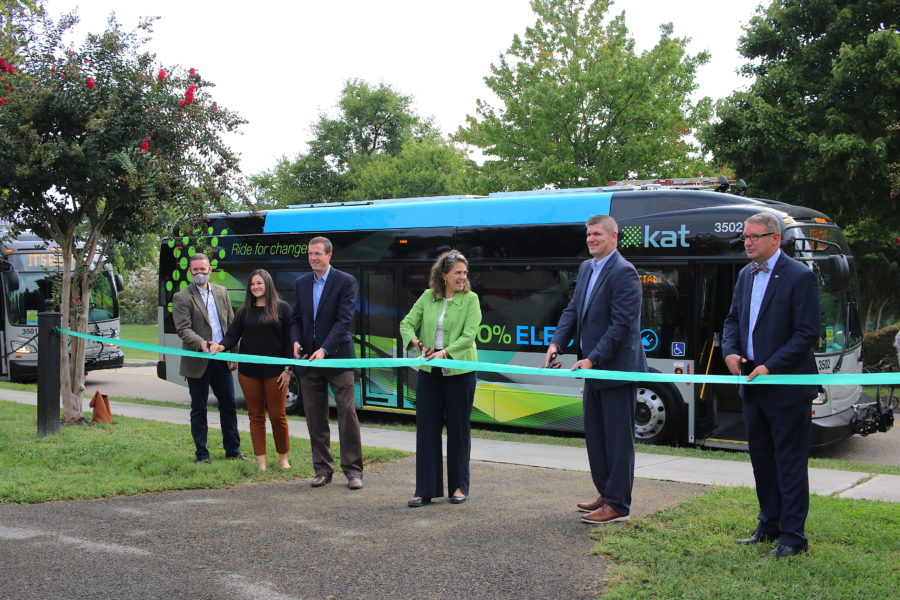 The next step is for KAT to test the buses on various routes, train operators and prep the vehicles to begin regular service which, at this point is scheduled for January. Issac Thorne said, “By drawing new people to consider transit, reducing reliance on cars, opening up opportunities, and providing sustainable mobility choices, transit can make cities more livable, make the air cleaner, and help meet our challenging but achievable climate goals.”

According to the press release, the first two bus routes that will see the electric buses in regular service are Routes 17 – Sutherland and 31 – Magnolia Avenue, although plans could change.