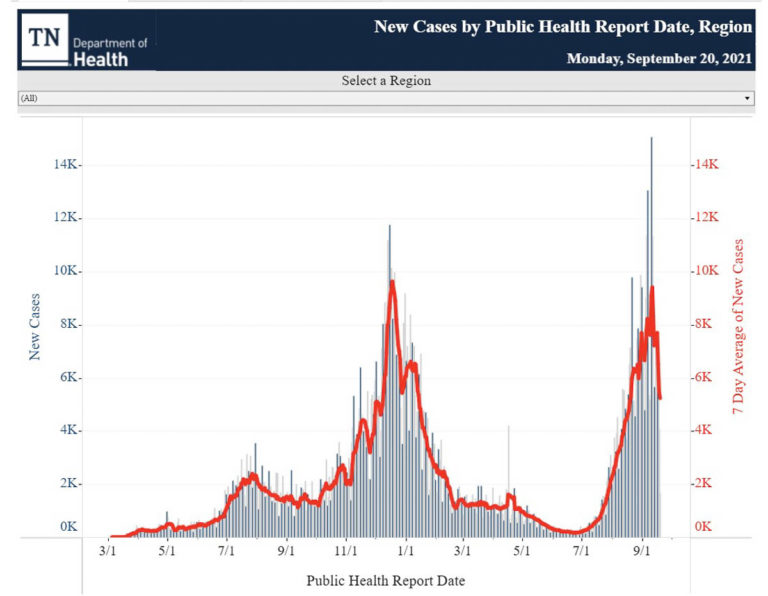 The Tuesday report comes with some reason for optimism at the state and local level. While the numbers continue to be very bad, particularly in the state, some of the metrics are clearly improving, signaling, perhaps, that we are on the downside of the current surge. The steep decline may be thanks to both vaccinations and from the sheer number of people who have recently recovered from COVID-19 and have immunity from having the illness. Or it may be a mystery, just as it was in January.

In the days since the Friday update, the state reported 6,381 new cases on Friday afternoon, 6,924 on Saturday, 4,255 on Sunday, and 2,500 on Monday. The state has now recorded 1,190,689 COVID-19 cases since the beginning of the pandemic and remains the number one state for cases per capita. If Tennessee were a country, its rate of 172,520 cases per million would rank first among all countries with more than one million people in population.

There are signs of improvement. Active cases now number 68,410 in the state, down from 85,192 a week ago. Additionally, the state is not currently worst for spread in the U.S., yielding that honor to Alaska, while dropping to 7th worst in the country. The rate of spread has declined from 160 per 100,000 to 74 per 100,000 in just one week. The seven-day average for new daily cases is 5,246, down from 8,406 just a week ago. The dramatic downturn resembles the sudden, sharp downturn experienced last January. If sustained, we may be seeing the end to the current surge.

Testing numbers have dropped to about 11,000 per day, but even with that reduction, the positive test rate has dropped to 11.88%, about half of where it has been recently. While still just over double where we’d like to see it, the dramatic drop is another indicator that spread is declining. Tennessee continues to rank 36th among the states in testing.

In the days since the last report, Tennessee reported 52 COVID-19 deaths on Friday, 57 on Saturday, 14 on Sunday, and 38 on Monday. A total of 14,450 state residents have died of the illness during the pandemic. Over the last seven days, the state has averaged 63 COVID-19 deaths per day, up from 45 per day reported here a week ago. A year ago on this date, the state was averaging 22 deaths per day. The state now ranks 23rd among the states in deaths per million.

While deaths remain high in the state, another indicator, hospitalizations, is trending in a better direction and may soon impact the high death numbers. 3,243 COVID-positive Tennesseans are currently hospitalized, down from 3,654 a week ago. Of these, 960 are in ICUs and 694 are on ventilators, down from 1,078 and 728 a week ago. Hospitalization numbers have dropped for all but one of the last eleven days.

Pediatric hospitalizations have also trended downward recently, though they’ve gone up a bit for the last two days. 54 children are currently hospitalized with COVID-19, while 14 are in ICUs and 5 are on ventilators. A week ago, those numbers were 65, 19, and 9 respectively.

The state continues to report over 100,000 new vaccinations each week, including 111,200 over the last seven days. The pace has slowed from a few weeks ago but appears to be stable at about that number. 51.7 percent of all Tennessean’s have gotten at least one shot, with 44.1% fully vaccinated. Tennessee ranks 43rd in full vaccinations in the U.S, bouncing between 42nd and 43rd.

The state continues to lag on vaccinations of younger people, with less than 30% of 12–16-year-olds fully vaccinated and less than 40% of people in their 20s and 30s.

Since the last report, the Knox County Health Department reported 554 new cases on Saturday, 358 on Sunday, 125 on Monday and 140 today. The average for those four days, 294, compares to an average of 524 a week ago. The trendline for the last fourteen days shows a sharp decline in new cases.

Since the beginning of the pandemic, 58,046 cases have been confirmed in the county and 14,017 probable cases have been reported. Active cases, now at 5,485, have dropped by about 500 since the same day a week earlier and is about a thousand fewer than the peak set just over a week ago.

As it has done at the state, demand for testing dropped by about 50% over the last week, with about 6,600 tests reported for the week. Unlike the positive test rates at the state level, Knox County’s positive test rate increased for the week, moving up from 21.7% a week ago, to 23% over the last seven days. With the drop in test quantities, came a decline in reporting time, down to just under two days.

In the 19-hospital central East Tennessee region, 715 COVID-positive patients are currently admitted, with 178 in ICUs and 140 on ventilators. Overall hospitalization numbers are down slightly from the 732 reported a week earlier, but ICU and ventilated patients are up from slightly from 176, and 135. Taking a broader view, hospitalizations have been generally stable since early this month. While they fluctuate by the hour, the number of ICU beds available at the last report was 21, which is an encouraging increase from a week ago when there were six.

Since Friday, the KCHD has reported fourteen deaths from COVID-19, including five today. Of these, one person was between 18-44 years old, five were between 54-64, five were between 65-74, and three were 75+. Since the beginning of the pandemic, 786 Knox County residents have died of the illness.

Vaccinations continue at a very slow pace for the county. 56.08% of county residents have received at least one shot, while 51.08% are fully vaccinated. The numbers have increased a bit over .5% in the last seven days. Just over 8,000 shots were given in the county over the last seven days, up from just under 7,000 in the previous seven-day period.