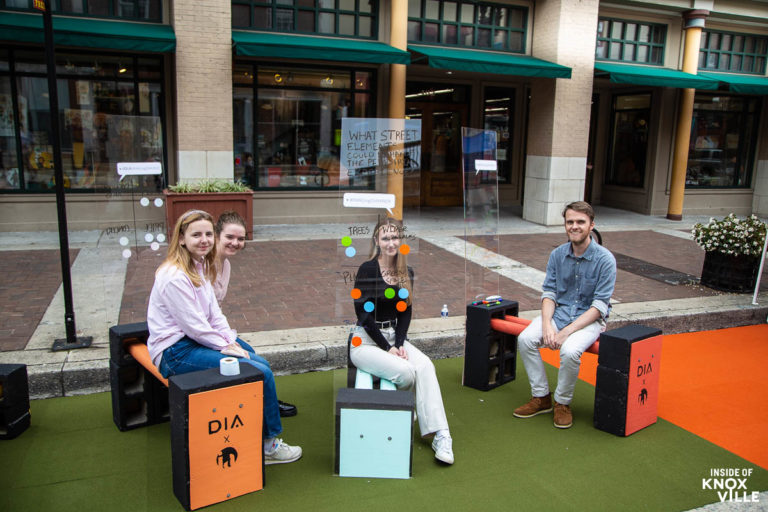 For five years, (here’s a look at the 2018 event) the East Tennessee American Institute of Architects (AIA) and the East Tennessee Community Design Center (ETCDC) has hosted Park(ing) Day. The annual event is designed to encourage us to consider the space devoted to automobiles and the uses (some whimsical) we could find for this space if not occupied by multi-ton metal vehicles.

While automobiles are a requirement for many people, and they have to be parked, there is a serious price that comes with that convenience. Sometimes we need help re-imagining what we’ve accepted as a necessary evil. Several years ago, when several blocks of Gay Street were closed for a period, those of us who live and are downtown often got a taste of a pedestrian-friendly Gay Street. It was spectacular.

There may be some local facts you haven’t considered:

We tend to think of downtown, after the recent years of redevelopment, as being a very densely populated location. As it turns out, downtown density was much greater in 1935. What happened? Cars. Consider the graphic below. Downtown was dense with buildings (shown in black) in 1935. By 2014, many of those buildings disappeared in favor of parking lots and garages (pink and red). Even though it feels as if we’ve had major development, the third graphic shows (in green) the new development as of 2018. It is a tiny fraction of what was there before.

After a virtual event last year because of the pandemic, Park(ing) Day returned this past Friday to the 400 block of Gay Street. Metered spaces along the small strip were converted to fun, functional, or instructive spaces. Community members, organizations, and design groups transformed the spaces for about six hours with the focus on imagining what those spaces could accommodate, if not cars.

The national event started in 2005 in San Francisco by the design group Rebar. It is intended to engender debate about how we allocate space, how much of it is devoted to cars, and to consider alternatives. Imagine if those spaces were devoted to more outdoor seating for restaurants (as New York has done recently), to exercise classes, to comfortable seating areas for social engagement, or simply to more space for humans.

A lot of the entries were fun this year, as always. I particularly enjoyed watching people move around buildings and greenspaces to make a space better in the interactive display offered by the Knoxville/Knox County Planning group. Starting from scratch can help us realize what we really want from a space, without pre-conceived restrictions.

If you missed it this year, watch for it next year, and as you walk about downtown, consider what a small space it is, and how it might be best utilized.