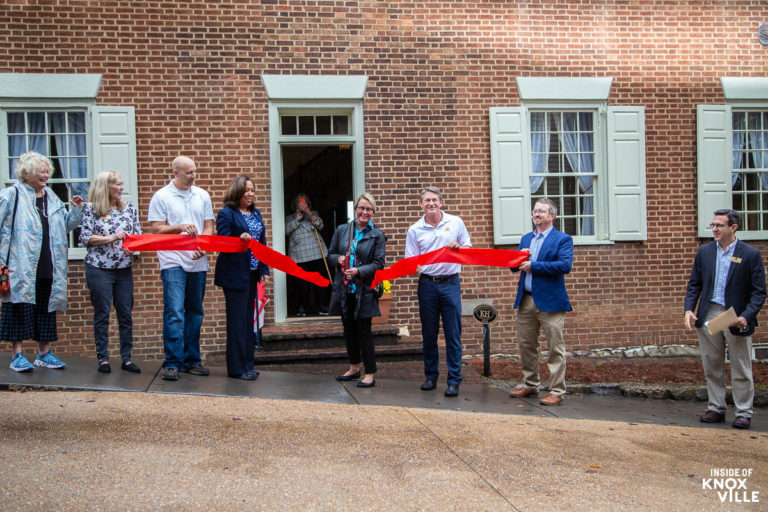 As I first reported here a year ago, the Craighead-Jackson House, downtown’s fifth oldest structure and one of only five to have reached the 200 year mark has gotten a bit of a make over and freshen-up, along with the gardens in the back. The work on the home was funded primarily by a $75,000 grant received from the Boyd Foundation.

The home was completed in 1818 by John Craighead, who died just four years after its completion. His family lived in the home until 1855. Dr. George Jackson owned the home for about 30 years from the late 1850s until 1885, hence the second part of the home’s name. The Aebli family, which owned it for 55 years, following Dr. Jackson, lived there longer than anyone else, but somehow missed out on the naming rights.

The home, like so many other historic homes, saw a period of decline during which it was divided into apartments and most of its historic interior architectural elements were lost. A series of businesses operated out of the home, a door was added, and the exterior was painted white.

The building was purchased by the city and state government in 1957 to save it from likely demolition, and it was gifted to the Blount Mansion Association. Under the leadership of Eleanor Keener, many period-appropriate details and fixtures were restored to the interior. The exterior was restored to its original configuration. In 1958 the home was named, after previously being referred to as simply, “the white house across the street.”

The Boyd Foundation grant was used to restore windows in the home, to refinish hardwood floors (which are beautiful), repair plaster, and to install a new restroom and breakroom in the house. Limited by the historical designation of the Blount Mansion to do only tours there, the Craighead-Jackson House now offers the flexibility of the organization to offer field trips, meeting and special events space and more. Some events may be hosted by Blount Mansion, while the facility is also now available for rental by outside groups.

Also restored was the garden behind the building. Edith Henderson designed the garden in 1972 at the direction of the Knoxville Garden Study Club, which has been involved with it since. A fundraiser was held for the restoration of the garden and to erect an obelisk in honor of Dorothy Stair (pictured to the far left in the ribbon cutting photograph). Dorothy, formerly President of the Blount Mansion Board. A small ceremony to unveil the obelisk with her name was unveiled last week.

If you want to hold a small event in a historic home, this is a new option. If you are on a walk around downtown, be sure to notice and appreciate this handsome home. Also, walk around back and enjoy the beautiful garden. They are each downtown Knoxville treasures.