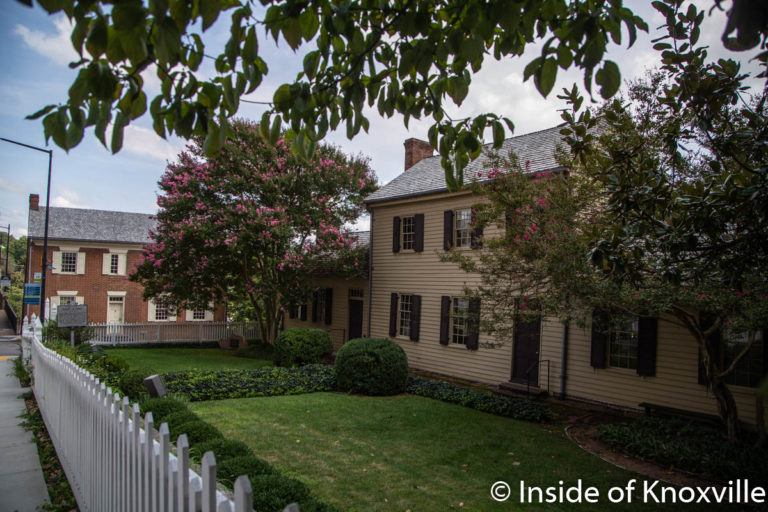 There aren’t many 200-year-old buildings in downtown Knoxville. Blount Mansion is, I believe, the oldest still standing where it was built, which was 1792. One cabin at James White Fort dates to 1786, but it was taken apart, moved and reassembled twice. Still, it’s remarkable to have it still intact. The James Park House was completed in 1812 and the Lamar House (now part of the Bijou Theatre) was completed in 1817. Just a year later, the the Craighead-Jackson home was finished in 1818 by John Craighead.

The Blount Mansion Association, which operates Blount Mansion, Knox County’s only National Historic Landmark, also owns the Craighead-Jackson home just across State Street. The Boyd Foundation has agreed to grant $75,000 which will allow the association to make repairs that will enable the home to be once more opened to the public.

The house has seen pretty dramatic ups and downs. John Craighead died just four years after its completion, though the family continued to live there until 1855. Dr. George Jackson owned the home from the late 1850s until 1885, hence the name of the home. Interestingly, the next family to own it, the Aebli family, owned it for longer than any other family, about 55 years, but their name isn’t attached.

The home was subsequently divided into apartments, as happened to so many homes of the era. Blount Mansion was saved in the 1920s and an idea was later floated to make several historic structures into a park of sorts on that end of downtown. The efforts failed and one of the last structures to fall was what is pictured as the Chisholm Tavern on the mural across the street, though whether it is the actual Chisholm Tavern is debated.

In an effort to save the Craighead-Jackson home from demolition, the city purchased the property in 1957, subsequently giving it to the Blount Mansion Association. An effort was made in the 1960s to restore the home as much to its original state as possible. Changes included reversing an entire staircase into its original position.

While the exterior of the home is much as it was originally, many of the architectural details inside had been lost. Making use of some of the mantles and other mill work from the presumed Chisholm Tavern, the interior was restored using era-appropriate pieces. A beautiful lock on the back door, as an example, is from the correct era, but from a home in New York City.

After the three-year restoration project, the house became the visitors center for Blount Mansion until the middle 1990s. Once the new visitor center was opened, it was used mostly for storage of archives and items not in use in the mansion. It was utilized lightly for a few events in 2019, but is not quite in shape to host groups on a regular basis.

The Boyd Foundation, a “philanthropic organization operated by Randy and Jenny Boyd, their sons Thomas and Harrison, and their daughter-in-law Lindsey” offered the grant as a path toward greater utilization of the home. Windows will be restored, interior plaster repaired, handicapped accessible bathrooms will be added and the building will be able to host education and special events as well as tours. The work is expected to take 12-18 months, and should be completed by fall 2021.

Randy Boyd issued a statement about the grant:

Blount Mansion and the Craighead Jackson House are two of the most important parts of our state’s history, and are and should be a tremendous point of pride for Knoxville. It’s also a part of my history and one of early field trips I took as a schoolboy. Jenny and I are honored to support The Blount Mansion Association and appreciate all they do to preserve our history.

Restoration of the Craighead-Jackson House has been on our wish list for such a long time. Thanks to the generosity of the Boyd Family Foundation, our community will be able to step back into time to enjoy the rooms of our past generations. We foresee this space as fully experiential for all ages from children handling implements and materials central of the times, to crafting, musical events and activities for all ages.

Outside the home you’ll find the remains of a garden planned and executed in 1972, but now in disrepair, a project in waiting for the future. You’ll also find, just under the end of the Hill Street Viaduct, what is thought to be the basis for Gene Harrogate’s home in the novel Suttree by Cormac McCarthy On the south side of the home is a marker noting the Chisholm Tavern’s nearby location.

The home has long been one of my favorite downtown buildings, unique in its (what I learned later) Federalist style. We lost so much of what we had from that earliest portion of our city’s history and its important that our generation preserve these jewels for the following generations. You can support the Blount Mansion Association through a gift at this link and you can learn more about the Craighead-Jackson Home here.